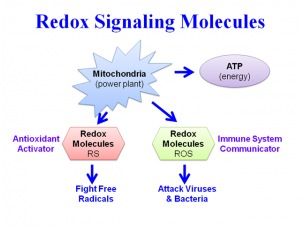 Redox Signaling refers to the process in which free radicals, reactive oxygen species and other electronically activated radicals act as messengers in the biological system. It is basically the process that shows how cells in our body respond to oxidants and free radicals. Redox signaling is a continuous and crucial process, through which human cells communicate with each other and carry out vital body functions.

Redox Signaling Molecules – What are they?

There are two kinds of Signaling molecules – “communicator” and “activator”. These two play the role of messengers and are responsible for the communication between cells throughout our body. Also known as Signaling molecules, they activate the body’s antioxidant compounds – Glutathione, SOD and Catalase.

The first set of “activator” molecules trigger the antioxidants stored in the body. Antioxidants are extremely effective in fighting off the damage caused by free radicals and oxidative stress; however they cannot function unless activated by the signaling molecules. Thus you require the Redox signaling ‘activator’ molecules to get the antioxidants to work.

The second set of “communicator” molecules is responsible for enabling proper communication between the cells of the body, ensuring optimum performance of the immune system and  protecting the body against external stimuli such as harmful bacteria, viruses etc. The millions of cells in our body are able to properly communicate and function because of the Redox signaling molecules.

Why is Redox signaling so important?

Both the internal and external factors such as stress, toxic chemicals, bacterial infections, poor nutrition etc affect our health in an adverse way. This causes significant cellular damage and a reduction in Redox signaling molecules. Without an adequate supply of Redox signaling molecules the antioxidants and immune system are unable to function effectively, leading to a vast range of health ailments.

Researchers and scientists worldwide have been conducting several studies on the Redox signaling molecules to understand more about their structure, impact and function with respect to human health. Let’s take a look at some of the popular studies on this subject:

Charles Darwin, the father of evolution had mentioned “white cats with blue eyes are almost deaf”. He proposed that developmental issues with the nervous system might be the cause of deafness in the white, blue-eyed cats. But researchers believe it has something to do with the Redox signaling process, as Central nervous system development is a messenger-mediated process and so is the melanin synthesis.

Study by Hoffer and Osmond

The first instance of Redox processes being involved in cell signaling was given by Hoffer and Osmond. As per the Adrenochrome hypothesis, “psychoactive oxidative products of catecholamines (adrenochromes) play a role in schizophrenia and other neuropsychiatric diseases”. While the proposed hypothesis still remains in question, the fact that messenger-mediated oxidative stress can result in neuropsychiatric diseases, has been proven correct.

Role of Active Oxygen Species in Ocular and Neurological Diseases

“Electronically activated oxygen molecules such as superoxide or peroxide are known to be the significant factors responsible for certain disorders of the eye and nervous system. For instance, a person with high levels of homocysteine or copper often shows four characteristic signs – psychotic behavior, movement disorders, deafness and pigmentary abnormalities. Both copper and homocysteine act as catalysts in the production of reactive oxygen molecules, and the above mentioned abnormalities can be a result of the Redox signaling process caused by these reactive molecules.”

This theory suggests that active oxygen species act as specific intermediary transmitters for a variety of biological processes including inflammation and fibrosis.

Aging is also attributed to this kind of free radical damage. The cells are not completely destroyed, but become less efficient. Too many oxidative molecules present in the blood and skin cells causes damage and aging. Improper balance of Redox signaling molecules causes the immune system to attack healthy cells, which divide and further spread the damage.

Cells are damaged by factors like sunlight, environmental pollution, toxins, chemicals, infections and other irritants. Damaged cells build up oxidants or free radicals. As a part of the Redox signaling process, the activator molecules trigger the antioxidants that neutralize the free radicals and maintain a balance of oxidative molecules in the body.  Also the signaling molecules ensure that the immune system and cellular communication is functioning at optimum levels.

A lack of Redox signaling molecules disrupts this entire process – the balance of activated oxygen molecules is destroyed, leading to cellular damage and other health ailments.

Redox signaling is a widespread and essential process governing essential cellular activities, and there is an urgent need for new methods of study to assess the role of Redox molecules at the molecular and cellular level. With more products that can restore the balance of Redox molecules in the body, we would have answers and solutions for a wide variety of neurological and physical ailments. ASEA is one of those products. It is actually the only perfectly balanced mixture of stabilized Redox Signaling molecules that exists outside the body. 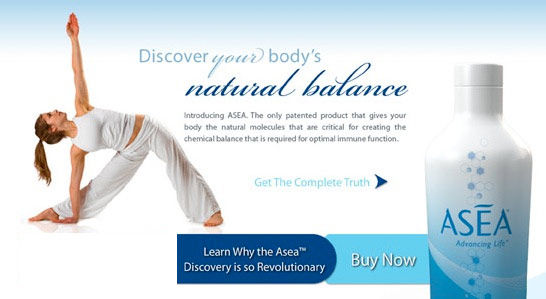