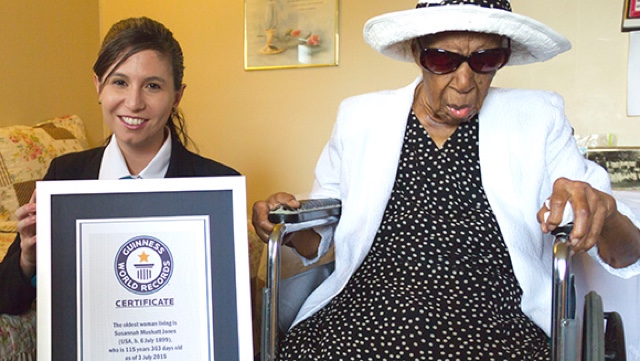 World’s oldest woman alive shares the secret to her longevity, giving credit to bacon, eggs and sleep. This post from Gothamist turns the spotlight on Susannah Mushatt Jones who turned 116 this year.

Happy 116th birthday to Susannah Mushatt Jones—Tee (short for Auntie) to her 100 nieces and nephews, Miss Susie to her friends—who was born on July 6, 1899, the same year Queens and Staten Island joined New York City. She’d be a few months younger than Vladimir Nabokov, and a few days older than E.B. White, if either of those men had been so lucky.

Born in Alabama to sharecropper parents, Jones moved to New York City in 1923 (the year Yankee Stadium opened to the public in the Bronx), where she worked as a child-care provider until 1965.

The Guinness Book of World Records, self-proclaimed “global authority on record-breaking achievement,” presented Jones with a certificate on Friday, confirming that although Jones has been blind since age 100 and is nearly deaf, she is not bedridden, and only takes two medications a day.

But there’s more to every supercentenarian than the Guinness plaque propped precariously in her lap. In 2005, Jones, who had been living in the seniors-only Vandalia Houses in East New York for more than 20 years, got a letter from Mayor Bloomberg (wishing “good health and great happiness”) for her twice-daily commitment to the House’s tenant patrol, despite her blindness. Jones also put her first niece through college—the grateful relative ended up getting a doctorate, and wrote a gushing biography titled, appropriately, Susannah Our Incredible 114-Year-Old Aunt.

Married only once, and briefly at that, Jones has no children of her own. This may be the secret to her longevity, in addition to “Sleep!” according to Guinness, and four strips of bacon with eggs every single morning, according to the News.

Jones, who stole the (coveted?) title from Jeralean Talley of Detroit earlier this summer, is 150 days older than Emma Morano-Martinuzzi, 115, of Italy, who has also attributed her longevity toeating eggs and being single.