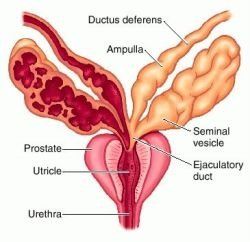 Prostate cancer is the second most common cancer diagnosed in men in the United States. It is very important to maintain a healthy prostate.

1. Gland: The primary job of the prostate is to produce and secrete some of the alkaline seminal fluids during ejaculation (about 30-35% of the semen ejaculate). Being alkaline, the prostate fluid, which is milky whitish in color, helps the sperm survive in the acidic vaginal environment. The prostate is considered to be a gland since glands secrete something.

Prostate-specific antigen (PSA) is a fluid produced in the prostate, playing a key role in enabling the sperm to swim into the uterus by keeping the semen in liquid form. It counteracts the clotting enzyme in the seminal vesicle fluid, which essentially glues the semen to the woman’s cervix, next to the uterus entrance inside the vagina. PSA dissolves this glue with its own enzyme so that the sperm can dash into the uterus and impregnate an egg if it is there.

It is this same PSA that is tested during the PSA blood test, a very controversial test because of the many factors that can cause the results to vary widely.

3. Muscle: The prostate is also a muscle that pumps the semen out through the penis with enough force to enter into the vagina to help the sperm succeed in reaching the cervix and ensuring procreation of the species.

4. AH!: An added bonus for males, the pumping action of the prostate sure feels good, making sex desirable and thus helping procreation.

5. G: The prostate is the male G-spot. Prostate stimulation can produce an exceptionally strong sexual response and intense orgasm in men that are receptive to this sexual technique. The ability to control ejaculation at the prostate can also lead to prolonged orgasms and “injaculations” where no semen is expelled. This is done in advanced Taoist and Tantric sexual practices to contain the sexual energy internally.

6. Filter: The prostate also filters and removes toxins for protection of the sperm, which enhances the chance of impregnation and ensures that men seed with the optimum quality of sperm. This is perhaps the prostate’s most important function and, at the same time, can be one of the main reasons there is a growing epidemic of prostate disease and cancer as men deal with more and more toxins in food and the environment.

7. Erections: The prostate erection nerves are responsible for erections. These nerves trigger the penis to swell and harden with extra blood flow into it, producing an erection.

8. Secretions: Prostatic secretions also play a valuable role in protecting the urethra from urinary tract infections, which seem to be much rarer in men than women.

It does this with two small prostatic muscles called sphincters. They act as gatekeepers with shut-off valves to control and regulate the dual-purpose urethra tube. These gatekeepers ensure the right fluids flow at the right time – urination or ejaculation. Not a bad design!

One sphincter is located where the bladder and the upper part of the prostate meet (the internal upper sphincter). When functioning properly, it prevents urination until it’s time to go and stops seminal fluid from shooting backward into the bladder during ejaculation. When damaged, semen is forced back into the bladder and eventually exits with normal urination. This is known as retrograde ejaculation and is another possible side effect of prostate surgery – no chance of seeding a woman then!

The second, external lower sphincter is at the base of the prostate and is subject to our control. It prevents dribbling after peeing and is how we voluntarily can delay urination when inconvenient to go. Incontinence occurs when control of either sphincter is damaged and urine leaks or flows uncontrollably, thus forcing many men with prostate problems to wear adult diapers.

It’s easy enough to voluntarily control the lower sphincter and to stop urine or semen from exiting if you have enough Kegel muscle control, the ability to squeeze the flow shut. Either one of these sphincter muscles will block the urine until the urge to pee happens and the timing is right to release and let the urine flow.

An enlarged prostate or BPH can squeeze the prostatic urethra tube and the upper or lower sphincter, making urination difficult with a host of unpleasant, uncontrollable symptoms. BPH surgeries that remove part of the prostate can easily have side effects of incontinence or retrograde ejaculation.

10. Hormones: The prostate gland contains a crucial enzyme, 5-alpha-reductase. This enzyme converts the hormone testosterone in the body to DHT (dihydrotestosterone), which is at least ten times more powerful than simple testosterone. This potent hormone DHT has several purposes including male sexual drive and function. Over time, a build-up of toxins in the prostate may affect the production of this enzyme, which is then responsible for the declining sex drive in men as they age.

DHT and testosterone have mistakenly been targeted as guilty hormones in prostate problems rather than the excessive rise in modern male estrogen levels, leading often to medical interventions with serious side effects including lack of libido. Estrogen levels rise because of the prevalence of estrogens in factory foods, commercial meats and dairy, and estrogen-mimicking chemicals present in body-care and household products. It’s even found in municipal water and some plastic food packaging.

With such a complex gland having so many functions, a prostate disease can wreak havoc on a man’s health. Men would be wise to do all they can to enhance the health of their prostate – an unhealthy prostate can have an enormous impact on sexual function and simple daily urination.

The prostate is a powerhouse: a remarkable gland with huge repercussions on a man’s quality of life! 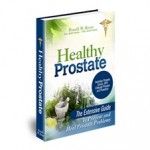 Ronald M Bazar, a Harvard MBA, is a health enthusiast and author of the new comprehensive book on the prostate called “Healthy Prostate: The Extensive Guide To Prevent and Heal Prostate Problems Including Prostate Cancer, BPH Enlarged Prostate and Prostatitis”, which is available on Amazon, iTunes, Kindle and more outlets.