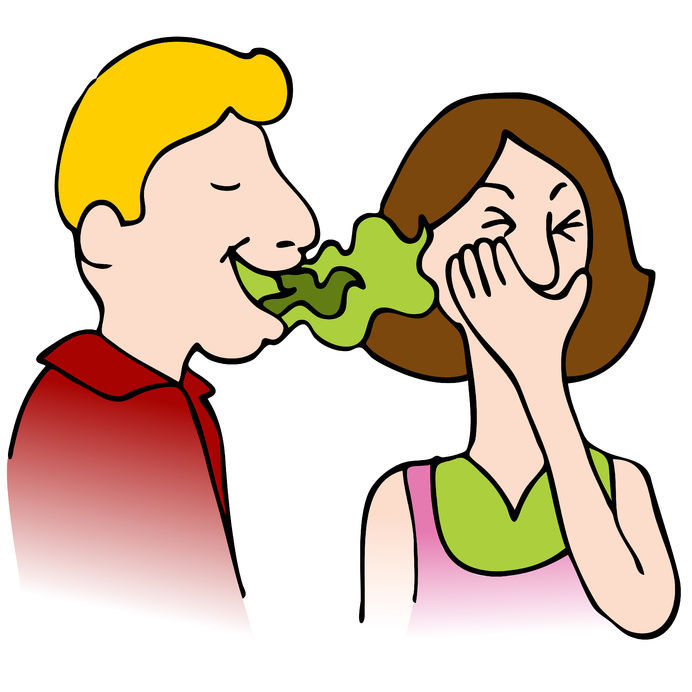 (BeWellBuzz) The technical term for bad breath comes from a combination of the Latin halitus with Greek osis, most literally translating “condition of the breath.” Since it’s a scantily used word, softly spouting out “halitosis!” could be a discreet way to let your friend know they need a mint. Let them know ahead of time.

Funky breath that’s caused by foods such as onions, garlic, or dairy are usually transient odors, and you know it’s coming. They eventually wear off or can be rinsed and washed away; but the chronic condition of breath most often originates from the mouth itself. Secondarily, the culprit could be an internal condition.

“Anaerobic bacteria” are microbes that don’t need oxygen, but tend to consider oxygen rich environments hostile. They accumulate in parts of the body where there isn’t great ventilation, including the small, insulated spaces of the nose, throat and mouth. The bacteria nestle themselves in the crevices of the teeth, on the back of the tongue, under taste buds and in your tonsils. As you eat, these bacteria consume food particles and then literally “excrete” smelly sulfur compounds. While your mouth is mostly inactive and comes into contact with less oxygen through the night, the bacteria multiply. Most cases of halitosis are a result of these.

Dehydration is a direct cause for stinky conversation. Saliva contains oxygen molecules and is also anti-microbial. When your body is deficient in H2O you produce less saliva, the oral region becomes even more airless, and these bacteria have a party in your mouth.

Cavities, gum disease, cracked fillings or unclean dentures are bacterial breeding grounds. If you’re experiencing chronic bad breath you may want to schedule a checkup with your dentist. Bad breath is reportedly the third most prevalent reason for dental visits, after periodontitis and tooth decay. Getting these fixed, along with good oral hygiene, could remedy the problem.

Conditions such as sinusitis, bronchitis and post nasal drip cause mucus to accumulate at the throat and back of the tongue. The mucus contains protein, which bacteria love to feed on. Swollen tonsils will also tend to accumulate food particles and, thus, become home to the bacteria. Since these conditions tend to come with a stuffy nose, they caused increased mouth breathing and dryness, all of which contribute to hot, stinky breath.

RELATED: A DIY Technique to Clear Your Stuffy Nose Instantly

It’s entirely possible that your teeth are clean, your mouth fresh, hydrated and well oxygenated, yet odors seem to rise up from the inside. In fact, that may well be the case. Other causes may be slipping your notice, and which oral hygiene simply won’t defeat.

A study in 2008 discovered that the bacteria “Helicobacter pylori”, which is associated with peptic ulcers, also causes bad breath. These bacteria live in the stomach and actually feed on the highly acidic digestive fluids. In addition to ulcers, they can be the culprit behind acid reflux, the uncomfortable condition that brings up acids into the larynx and pharynx, breaking down their protective linings and also making them hospitable to odor-causing bacteria.

If you have a Helicobacter pylori infection you’ll most likely know it by the stomach pains you experience after eating. If you’ve been experiencing this type of discomfort, see your doctor immediately and test for this bacteria. Other culprits could be indigestion, or a food intolerance that causes food to ferment in the stomach and subsequently produce odorous gases.

How to Test for Bad Breath

The worst part about the condition is that we could be walking around talking up a storm and having no idea that we’re giving off noxious odors. The polite people around us want to love us but simply need to keep their distance. There are ways to check your own breath. Here are a few:

If your halitosis is being caused by a stomach condition, Dr. Katz, an expert of oral hygiene and conditions, says that while you won’t be able to cure bad breath until the condition is dealt with, there are some ways to alleviate it in the meantime. He recommends avoiding “foods like tomatoes, citrus, chocolate, peppermint and coffee, all of which are known to relax the pyloric sphincter.” He also suggests sitting upright for the first three hours after eating, and try eating less per meal. Less food could mean fewer acids produced in digestion, and less stimulation of these bacteria.

If the cause is mostly local bacteria in the mouth, you’ll need to make sure you have adequate saliva and oxygen to solve the problem. Here are some tips:

Finally, there are some culinary and dietary options that help to sweeten the breath.

“Change Your Breath From Bad to Good” by Pamela Babcock http://www.webmd.com/oral-health/guide/change-your-breath-from-bad-to-good