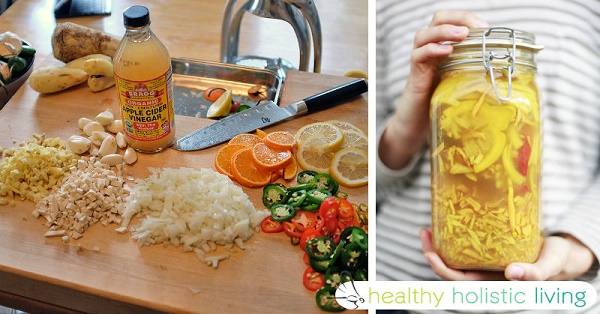 Have you tried Fire Cider? It’s one of the best natural cold remedies. As we head into the cold & flu season, make sure you’re prepared with our Fire Cider recipe!

Fire Cider is a time-tested, natural remedy for preventing and healing cold and flu symptoms. This post from Healthy Holistic Living presents a DIY recipe for fire cider and sheds light on the science-backed benefits of each of its ingredients.

If there is one remedy that can prevent and aid healing of any symptoms of colds and even flu, it is fire cider. Also known as fire vinegar, this folk medicine has a long history of use in the world of herbal healing. While there can be some variations to the recipe, the most common ingredients are: apple cider vinegar; roots of ginger, turmeric, and horseradish, onion and garlic, jalapeno peppers, lemon, and cayenne powder.

This combination of ingredients works by decongesting, firing up the circulatory system, and warming up the body. Many of the ingredients also have anti-viral, anti-bacterial and anti-microbial properties that have been recognized in scientific studies. (Scroll down for the recipe).

Here are the main ingredients along with their research-backed benefits:

Apple cider vinegar: Apple cider vinegar has a high content of acetic acid, which is a strong antimicrobial — it is able to kill bacteria. But its main reason for being included in the fire cider is actually its anti-histamine properties — it also works as a natural decongestant.

Many naturopathic doctors recommend to take a teaspoon of apple cider vinegar in a glass of water at the first signs of a cold and sinus or other infections, or as a preventative during cold and flu seasons. Organic Raw Apple Cider Vinegar by Bragg is one of the most popular brands, and the one I personally use.

Ginger: Ginger has been studied for thousands of years in Asian cultures and used to fight infections. Recently it is becoming more popular in the western diet, often taken in the form of tea for its antibacterial effect. A 2010 studycompared strong extract of ginger leaves and roots and to antibiotics chloramphenicol, ampicillin and tetracycline. The ginger showed greater antimicrobial activity against strep throat. The study concluded that ginger can be successfully used to fight infections.

Turmeric: Curcumin, the main active component of turmeric, has been studied and used for its anti-inflammatory, antioxidant, and antiviral properties for over 4,000 years. Turmeric’s antiviral properties have shown great potential in fighting colds and flu. Researchers have been looking for effective natural alternatives to fight the influenza. A 2009article found curcumin to have the ability to reduce viral replication of 90% of cell or more that have been infected by the virus. Being a powerful antioxidant, curcumin, is also able to fight free radicals, which are extremely damaging to the immune system. Keeping the immune system working properly is the best way to ward off disease, therefore taking turmeric before any cold or flu symptoms appear works as a preventative.

Horseradish: Traditionally horseradish has been used for its antibacterial, antibiotic, and mucus-clearing properties. It has even been approved for therapeutic treatment of respiratory infections, cold, sore throat, and sinusitis by Germany’s Commission E (similar to what FDA is in the US). German researchers have conducted a double-blind, randomized and placebo-controlled study published in 2012 that proved that horseradish (along with nasturtium) successfully treats respiratory infections.

Onion: From European folk medicine to Ayurveda, onion has a long history of use for relieving coughs and fighting infections. One of the best onion’s abilities is drawing in toxins and germs out of the air. In the last century it was a known tradition to hang cut onion in a sock or put pieces of it on a plate near a person who was sick with a cold or flu. Mostly forgotten today (at least in the US), it has worked for those who have tried it to the surprise of the modern doctors.

Garlic: Garlic, with its more than 200 chemical substances (especially allicin), is able to kill bacteria and parasites. Its components such as sulphur and bioflavonoids help protect the body from disease and infections. In many cases it is able to fight bacteria that is resistant to many medications.

Jalapeno peppers and cayenne: Any spicy food helps the nose to run and mucus to drain — an important part of getting better. Blocked passages due to cold or sinusitis can lead to further infection. Jalapeno, cayenne or other types of hot peppers are a great aid it clearing the nose and sinus cavities. Its active component capsaicin is also a powerful antibacterial.

Lemon: Lemon helps thin the mucus, which relieves the blocked respiratory system. It also changes the body’s pH level, which may make it less hospitable to viruses and bacteria.

The recipe I chose was an altered version of the one from Mountain Rose Herbs. The organic ingredients you will need are: 1/2 cup ginger root, 1/2 cup horseradish root, 1/2 cup turmeric root, 1 onion, 10 cloves of garlic, 1 jalapeno pepper, 1 lemon, 1/4 tsp cayenne powde, and a 32 oz bottle of Bragg Apple Cider Vinegar.

Directions: Put everything except vinegar in a food processor, and chop into little pieces (1/8 – 1/4 of an inch). Place all the ingredients into a glass jar or another glass container (do not use plastic or metal) and pour apple cider vinegar on top. Shake well and store in the fridge for one month (shake once every day). After one month, strain the pulp and pour the finished product into a clean jar.

Dosage: The general recommendation is taking one or two tablespoons of fire cider three times a day after the first symptoms of a cold or a respiratory infection. If your stomach is sensitive to spicy foods, lower the dosage to one teaspoon once a day and then up the dosage until you find what works for you — always listen to your own body!