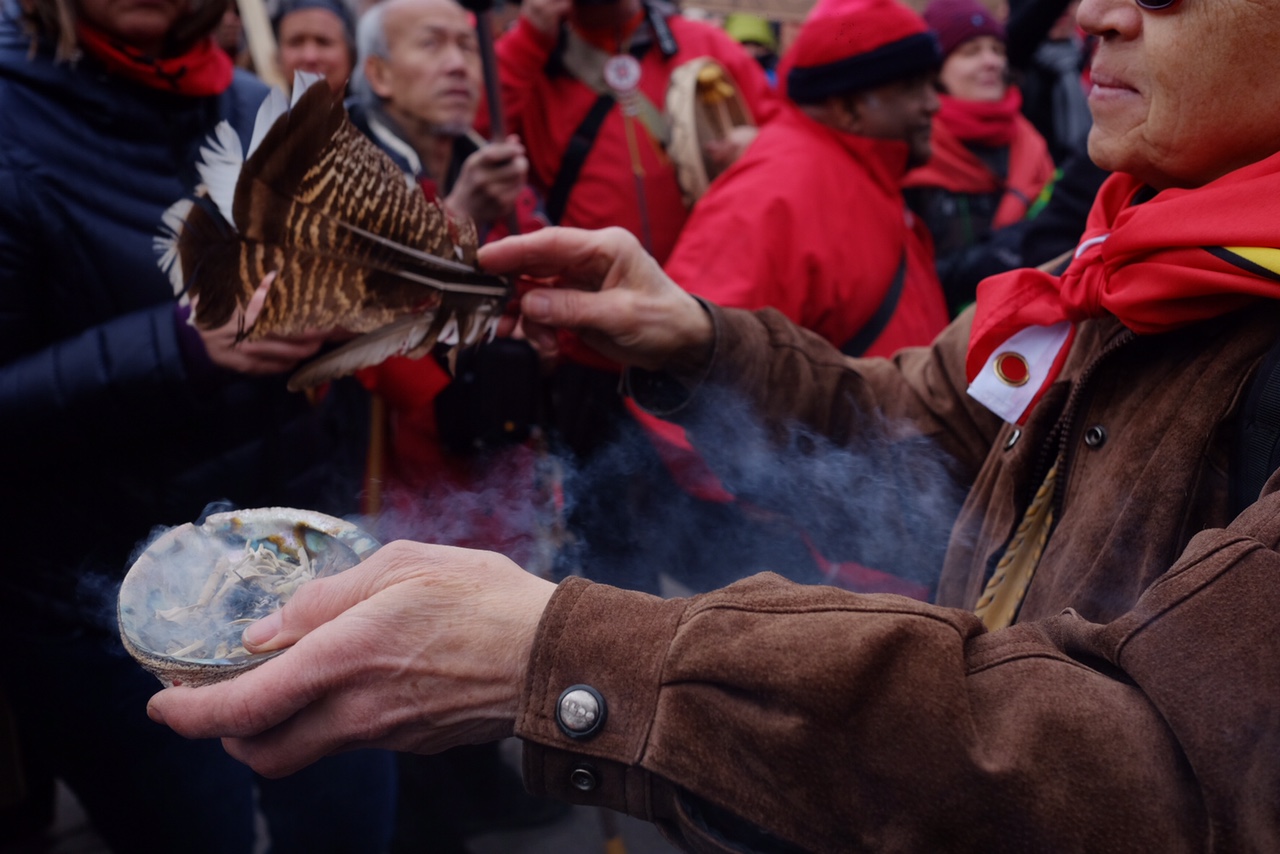 The ancient ‘spiritual’ ritual of smudging is a powerful air purifier capable of destroying 94% of aerial bacterial populations within an hour. This post from GreenMedInfo demystifies the traditional practice of smudging and explores the scientific studies that back it up.

The ritualistic use of plant smoke stretches back to the prehistorical era and is still used, the world over, as a way of ‘cleansing’ the spirit. Now modern scientific research reveals that the practice may actually have life-saving implications by purifying the air of harmful bacteria.

The burning of herbs and plant resins for medicinal and spiritual purposes – so-called ‘smudging’ – is an ancient practice among indigenous people around the world; one increasingly adopted by Westerners. Smudging is a technology believed to unlock the ‘spirits’ of various plant allies to restore balance and ease to the individual or group.  Some liken it to taking a ‘spiritual shower,’ enabling you to wash away emotional and spiritual negativity that accumulates in your body and the spaces you live.

That said, skeptics believe attributing health benefits to the burning of sage and incense reflects ‘magical thinking.’ The practice has even been accused of being a New Age form of cultural imperialism where ‘plastic’ or ‘white’ shamans mimic and co-opt the traditions of indigenous people their predecessors essentially conquered.

Given the polarized view on this increasingly common practice, as well as the well known role that the burning of incense plays in even Western religious traditions, such as Catholicism, we decided to explore the published literature on the topic of smudging’s scientifically validated medical benefits, to see what we could find.

First, we uncovered a 2006 review published in the Journal of Ethnopharmacology titled “Medicinal smokes,” that looked at single and multi-ingredient herbal and non-herbal remedies administered as smoke from 50 countries across 5 continents. The researchers found, with surprising overlap worldwide, medicinal smoke is mostly used to address the following specific organ systems: “pulmonary (23.5%), neurological (21.8%) and dermatological (8.1%).” They also found that “ambient smoke,” which is the type of passively inhaled smoke generated by smudging/incense, is traditionally believed to be an effective “air purifier.” The review argued that modern medicine should investigate medicinal smoke as a drug delivery system, owing to the following advantages: “The advantages of smoke-based remedies are rapid delivery to the brain, more efficient absorption by the body and lower costs of production.” 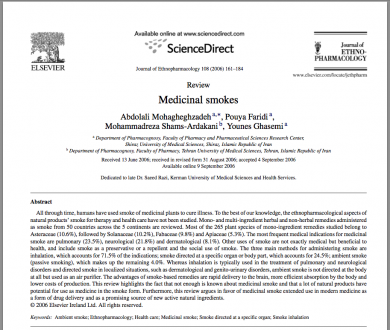 Smudging, of course, as a ‘spiritual’ ritual, is not aimed at ‘killing germs,’ or becoming a ‘new drug delivery system.’ But because modern biomedicine only acknowledges what is empirically verifiable – which does not include ‘the soul’ or ‘negative vibes’ – the practice will only attain a modicum of credibility from the perspective of the dominant, scientism-contaminated worldview, if it can be demonstrated that it actually performs a useful function, such as destroying disease-causing germs.

Thanks to a remarkable 2007 study titled, “Medicinal smoke reduces airborne bacteria,” published in the Journal of Ethnopharmacology, we now know that smudging may be one of the most powerful antiseptic technologies ever discovered. 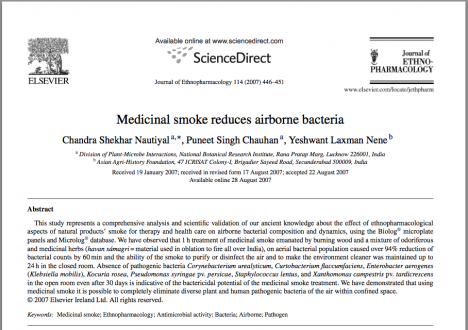 The researchers reported their amazing findings:

We have observed that 1 hour treatment of medicinal smoke emanated by burning wood and a mixture of odoriferous and medicinal herbs (havan sámagri=material used in oblation to fire all over India), on aerial bacterial population caused over 94% reduction of bacterial counts by 60 min and the ability of the smoke to purify or disinfect the air and to make the environment cleaner was maintained up to 24 hour in the closed room. Absence of pathogenic bacteria Corynebacterium urealyticum, Curtobacterium flaccumfaciens, Enterobacter aerogenes (Klebsiella mobilis), Kocuria rosea, Pseudomonas syringae pv. persicae, Staphylococcus lentus, and Xanthomonas campestris pv. tardicrescens in the open room even after 30 days is indicative of the bactericidal potential of the medicinal smoke treatment. We have demonstrated that using medicinal smoke it is possible to completely eliminate diverse plant and human pathogenic bacteria of the air within confined space.” [email info@greenmedinfo.com to request the full PDF of this study]

Did you catch that?

Not only did the burning of medicinal herbs clear aerial bacterial populations by 94% within one hour, but a full day later, the closed room was still effectively decontaminated. Even more amazing, a full month later, seven other pathogenic bacteria in the open room were still non-detectable.

When one considers that modern urban air has been found to contain at least 1800 diverse bacterial types[1] – including families with pathogenic members – this finding could have profound implications for combating a increasingly deadly array of antibiotic-resistant bacteria against which even the CDC itself has acknowledged its impotence.  Consider also that a recent microbiome of NYC’s subway system found close to 1700 different microbes, including those responsible for Anthrax (Bacillus anthracis)  and Bubonic Plague (yersinia pestis).[2]

Also, considering that conventional methods of air and surface sterilization and odor neutralization use chemical cocktails (e.g. Lysol) that are much less effective than advertised (one study found them up to 10 times less effective than believed), smudging or the use of natural incense products might constitute a far safer and more effective approach.

Given this discovery of medicinal smoke’s potent cleansing properties on aerosol microbes, we might look at Smudging’s traditional use as a cleanser of ‘evil spirits’ or ‘negative energy’ as less like a primitive projection and more like a metaphor for its very real antiseptic properties. This does not, of course, take away from its ‘cleansing’ effects upon the body’s subtler energy systems; nor does it take away from the the effects the medicinal smokes and its various small-molecule aromatic compounds have upon the olfactory system, which are largely responsible for the clinically proven health benefits of aromatherapy-based interventions.