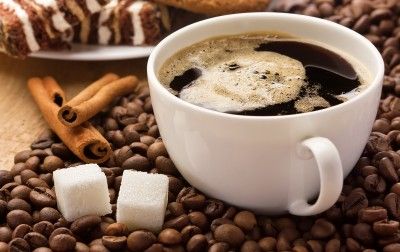 (BeWellBuzz) Caffeine is probably the single most popular psychoactive drug available in the United States of America and around the world. It’s surrounded by controversy because it seems to have health benefits as well as risks. Most people know that caffeine is inadvisable during pregnancy, can keep you awake, help you lose weight, and make you either exceedingly enthusiastic or just plain irritable. But do you know how caffeine actually affects your brain? You should. Even if you’re not consuming caffeine, someone you love is. Here are some facts about caffeine on the brain that you should know!

Caffeine essentially inhibits an inhibitor. Adenosine is a central nervous system depressant. It promotes sleep and suppresses arousal. The reason we gradually grow sleepy as the day ages is because adenosine gradually accumulates from the moment we awake. It inhibits what researchers are calling “wake-active” neurons, particularly cholinergic neurons, so that you can wind down and go to sleep.

Yet, cholinergic neurons are vital for thinking, memory, learning, alertness, and all cognitive function. The lack of these is associated with conditions as mild as brain fog and aloofness, or as serious as Alzheimer’s Disease. When caffeine blocks adenosine, it assists these crucial neurons in remaining active, and keeping you awake.

The way caffeine works to inhibit adenosine is kind of funny. Adenosine is looking to bind itself to a nerve cell receptor, but caffeine appears first and, as if saying may I have this dance, usurps the inhibitor’s position. It can do that, say researchers, because caffeine closely resembles the inhibitor and, therein, is acceptable to the receptor. The nerve cell receives the caffeine, which uses up all the cell’s receptors to lock out its foe. Unlike adenosine, caffeine offers no slow dance.  Now, rather than slowing down the cell’s activity as would adenosine, caffeine causes it to speed up.

Another function of adenosine is the dilation of blood vessels. Not surprisingly, caffeine also reverses this action. It’s often present in head ache medication because it causes blood vessels to constrict, which relieves swelling and pain.

The two may look alike, but they behave more like (friendly) rivals.

Caffeine stimulates and increases production of dopamine. You may have heard of dopamine as one of the “pleasure” neurotransmitters. It’s also associated with alertness and excitability. In the brain there are neural structures that comprise a “reward system,” a crucial component in learning. This system actually regulates our demeanor by rewarding desirable behavior. When you do “the right” thing, dopamine is released through the reward system to deliver pleasurable feelings that cause you to remember and learn quickly to repeat that action. Of course, what a person believes to be right is based on a host of other factors. Another drug that increases dopamine is cocaine. While caffeine is many times more mild than cocaine, studies show that it has similar effects on the body. In fact, psychiatrists have adapted a newer term to distinguish between possible schizophrenia and another condition caused by overconsumption of caffeine. They call this condition, “caffeinism.” While dopamine seems to be both vital and wonderful in healthy amounts, too much of a good thing may still be…too much. If you’re getting a little too jumpy or irritable, try easing up on the caffeine. And if you switch to decaf, remember decaf isn’t caffeine-free. A starbucks decaffeinated 16oz. contains up to 25mg, compared to 150mg in a 16 oz latte.

According to a report released in 2010, epidemiological studies strongly suggest that caffeinated coffee consumption may be effective as a therapeutic against Alzheimer’s disease (AD). In this study scientists fed mice the human equivalent of five cups of coffee per day, from their youth to old age, and observed them against a control group consuming no caffeine. The test group showed protection against memory degradation and lower levels of important markers for AD. “Moreover, ‘aged’ cognitively-impaired AD mice exhibited memory restoration and lower brain Abeta [AD marker] levels following only 1-2 months of caffeine treatment.”

The study isolated the various components of coffee and found that caffeine was, indeed, the culprit behind cognitive benefits. Researchers concluded that a moderate intake of caffeine may have a “surprising ability” to prevent or treat AD. Multiple studies are currently be conducted for more insight.[1]

Caffeine is found naturally in the leaves, seeds and fruits of more than 60 plants. It’s also made synthetically and added to foods and beverages for a fast jolt.

Synthetic caffeine requires less digestion than plant sources, causing it to absorb and rapidly access the brain. On the other hand, natural caffeine comes from a whole food source, earth-made packaging that also provides life-giving nutrients including antioxidants. Do the two forms affect your body differently? Considering the notable difference in nutrient content, assuredly. Natural caffeine is going to be more complex, they synthetic, refined and targeted.

As a good rule of thumb, if you see “caffeine” in the ingredients list, it’s synthetically made. Otherwise, the caffeine-containing ingredient will be named, such as coffee bean or green tea. Following is a list of the most common natural sources of caffeine found in many products today:

Next time you enjoy a rich brew, you’ll have a better understanding of how and why it’s working. Most experts recommend caffeine consumption remain under 500mg, others say more than 300mg is pushing it. One average cup of about 7oz will contain anywhere from 115-175mg. Do the math, and be gentle on your brain.