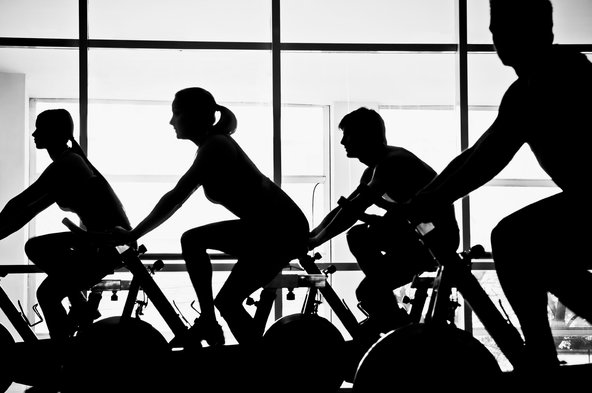 In this post from The New York Times, Gretchen Reynolds discusses the study that helped in understanding that benefits of exercise include gene expression:

We all know that exercise can make us fitter and reduce our risk for illnesses such as diabetes and heart disease. But just how, from start to finish, a run or a bike ride might translate into a healthier life has remained baffling.

Now new research reports that the answer may lie, in part, in our DNA. Exercise, a new study finds, changes the shape and functioning of our genes, an important stop on the way to improved health and fitness.

The human genome is astonishingly complex and dynamic, with genes constantly turning on or off, depending on what biochemical signals they receive from the body. When genes are turned on, they express proteins that prompt physiological responses elsewhere in the body.

Scientists know that certain genes become active or quieter as a result of exercise. But they hadn’t understood how those genes know how to respond to exercise.

Enter epigenetics, a process by which the operation of genes is changed, but not the DNA itself. Epigenetic changes occur on the outside of the gene, mainly through a process called methylation. In methylation, clusters of atoms, called methyl groups, attach to the outside of a gene like microscopic mollusks and make the gene more or less able to receive and respond to biochemical signals from the body.

Scientists know that methylation patterns change in response to lifestyle. Eating certain diets or being exposed to pollutants, for instance, can change methylation patterns on some of the genes in our DNA and affect what proteins those genes express. Depending on which genes are involved, it may also affect our health and risk for disease.

Far less has been known about exercise and methylation. A few small studies have found that a single bout of exercise leads to immediate changes in the methylation patterns of certain genes in muscle cells. But whether longer-term, regular physical training affects methylation, or how it does, has been unclear.

So for a study published this month in Epigenetics, scientists at the Karolinska Institute in Stockholm recruited 23 young and healthy men and women, brought them to the lab for a series of physical performance and medical tests, including a muscle biopsy, and then asked them to exercise half of their lower bodies for three months.

One of the obstacles in the past to precisely studying epigenetic changes has been that so many aspects of our lives affect our methylation patterns, making it difficult to isolate the effects of exercise from those of diet or other behaviors.

The Karolinska scientists overturned that obstacle by the simple expedient of having their volunteers bicycle using only one leg, leaving the other unexercised. In effect, each person became his or her own control group. Both legs would undergo methylation patterns influenced by his or her entire life; but only the pedaling leg would show changes related to exercise.

The volunteers pedaled one-legged at a moderate pace for 45 minutes, four times per week for three months. Then the scientists repeated the muscle biopsies and other tests with each volunteer.

Not surprisingly, the volunteers’ exercised leg was more powerful now than the other, showing that the exercise had resulted in physical improvements.

But the changes within the muscle cells’ DNA were more intriguing. Using sophisticated genomic analysis, the researchers determined that more than 5,000 sites on the genome of muscle cells from the exercised leg now featured new methylation patterns. Some showed more methyl groups; some fewer. But the changes were significant and not found in the unexercised leg.

Interestingly, many of the methylation changes were on portions of the genome known as enhancers that can amplify the expression of proteins by genes. And gene expression was noticeably increased or changed in thousands of the muscle-cell genes that the researchers studied.

Most of the genes in question are known to play a role in energy metabolism, insulin response and inflammation within muscles. In other words, they affect how healthy and fit our muscles — and bodies — become.

They were not changed in the unexercised leg.

The upshot is that scientists now better understand one more step in the complicated, multifaceted processes that make exercise so good for us.

Many mysteries still remain, though, said Malene Lindholm, a graduate student at the Karolinska Institute, who led the study. It’s unknown, for example, whether the genetic changes she and her colleagues observed would linger if someone quits exercising and how different amounts or different types of exercise might affect methylation patterns and gene expression. She and her colleagues hope to examine those questions in future studies.

But the message of this study is unambiguous. “Through endurance training — a lifestyle change that is easily available for most people and doesn’t cost much money,” Ms. Lindholm said, “we can induce changes that affect how we use our genes and, through that, get healthier and more functional muscles that ultimately improve our quality of life.”

Source: How Exercise Changes Our DNA – The New York Times