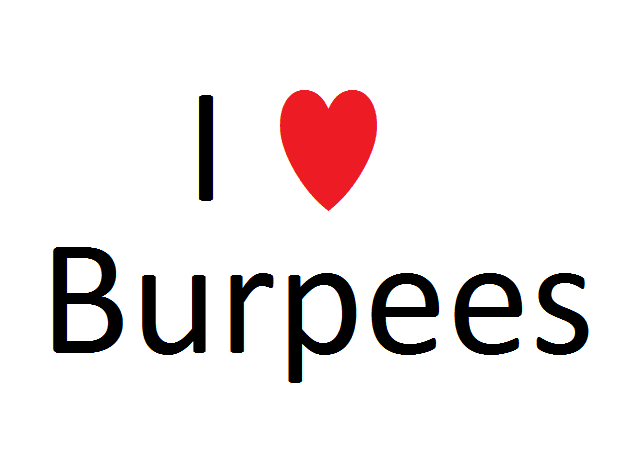 In the article “Voted Top Exercise by Trainers, Fitness Gurus and Kinesiology Experts” I explained some of the history and description of the very awesome burpee, an exercise that is absolutely free of charge, requires no equipment other than you body, and is touted the #1 high intensity workout to burn fat and get or stay fit.

I also convinced you why so many modern exercise enthusiasts have grabbed hold of the burpee as a muscle building, fat burning treasure. Trainers and trainees alike swear by its efficacy to help you lose weight, stay lean, strengthen, tone and build endurance.

Everyone at every fitness level who has the full use of their body can do a burpee or one of its variations. CrossFitters may smack me but, beginners, you don’t have to do a pushup. You don’t have to jump.

As you build strength and increase endurance you’ll be able to do the more challenging variations, to which there seems to be no end. Fitness fanatics everywhere are popping up with the latest and greatest versions.

The burpee was formally invented by Royal H. Burpee, PhD, a physiologist and fitness pioneer of the 20th century. Also sometimes called the “squat-thrust,” the burpee came into being as a fitness assessment tool in 1940 and was quickly instated by the Army and Navy to determine the fitness levels of new troops during.

Now it’s used not only to assess but to intensify workouts and buff up bodies.

Here’s how to do it step-by-step, with some variations for you to try.

For a full session, try doing burpees as fast as you can without losing form for 30 seconds. Take a 10 second breather. Repeat. Complete 5 sets.

This one is for a beginner fitness level or if this is your first foray into H.I.T. If it’s too easy, move on.

This would be exactly the same as the basic burpee but with one added movement between steps 3 & 4. Once in plank position add a pushup.

Some emphasize each position, others go for a fluid movement. Rather than pausing on plank, thrust the feet back and move continuously into the pushup, then seamlessly thrust returning to the squat and into the jump. It takes practice and strength to make it smooth while maintaining form. As with all exercises, never hold your breath.

Do a basic burpee with pushup. After the pushup stay in plank, jump your feet apart and together to add a plank jack. Finish as usual with squat and jump. You can also reverse the order, doing the plank jack first followed by the pushup.

I got this from Shawna Kiminski and I recommend her program Challenge Burpee to you.[1] She calls it the Frog Burpee. Setup is the same as basic. This time you’ll jump back to plank twice, then finish with the squat and “throw ya’ hands.”

Some have gone so far as to commit to doing one additional burpee every day for 100 days. The challenge starts you out with one burpee on day one; two on day two; three on day three; and so on. By day 50 your body should be feeling and looking different. By day 100, you’ll be able to do 100 burpees in one sitting. Fantastico!