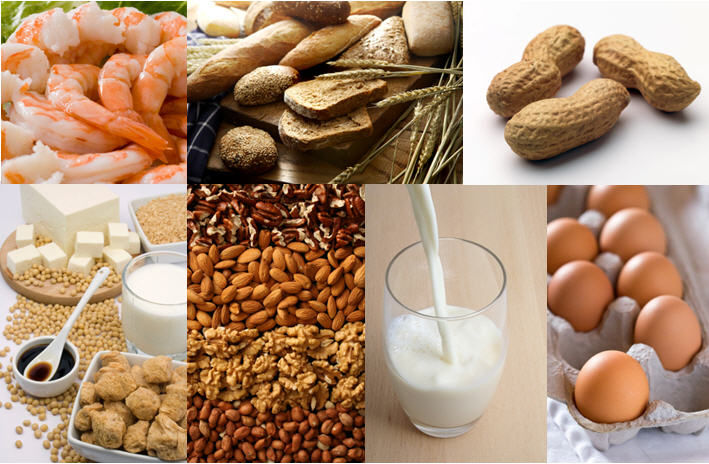 When I was growing up, I knew only one child in my circle of friends who was challenged with a food allergy. Viktoria Lazar was allergic to strawberries. That was it.

Many years later, with nieces and nephews of my own, my siblings and friends would speak of forms for Daisy Scouts asking about food allergies, birthday invites asking about food allergies, pot-luck parties asking that “nothing with peanuts” be brought and sometimes instructions about cross-contamination.  Then there was the close friend with the peanut-allergic child, who exhibited ugly welts after being licked by my dog who had been eating – you guessed it – peanut-butter dog biscuits.

What could be the cause of this crazy increase in food allergies?

My own nieces and nephews have them.  Thankfully, not life threatening allergies, but significant all the same.  I’m now that guy who asks, “What is safe for your child to eat?” when meeting my friend’s kids in my home.  Making food to share means literally bagging the peanut and tree nut product and scouring my kitchen – just in case someone left a smear of peanut butter somewhere.

I’ve heard parents callously state that it’s all a big hullaballoo about nothing.  And I’ve read the stories about children dying.

Within the last twenty years, as greater awareness of food allergies has come forward, there has been a trend in delaying the introduction of foods know for carrying a significant risk for allergy.  Some cultures known for introducing peanuts much earlier than the US culture has far less prevalence of peanut allergy.  Furthermore, some people will react to a roasted peanut but will not react to a boiled peanut.

Research shows some mighty interesting things when it comes to eggs and milk.  Many people are tolerant of these food items when they are baked into bread or desserts, but not by themselves or – for instance – scrambled eggs.  Another interesting observation from Johns Hopkins is that many people with verifiable dairy allergies will not react to raw milk.

We know that something is very disturbing about our food supply, but we can’t just put our fingers on it.  I’m not going to try to solve these issues in this piece, but I am going to ask you to THINK.

Statistics show conclusively that diagnosed life-threatening peanut allergies doubled between 1997 and 2002.  Two out of twenty children have some form of food allergy or, at the very least, a significant sensitivity to a food product.  Hospitalizations related to a food reaction have increased over two-hundred percent.  TWO HUNDRED PERCENT.  And these statistics are increasing.

What is in our food that is causing this increase in allergies and sensitivities?

Let’s look at what our grandparents and great grandparents ate.  Whole foods.  Pesticide free foods.  Non-processed foods.  Foods that had not been engineered to be something other than what they were.  Foods that were not packed with chemicals, colorings, flavors, preservatives and massive amounts of additives.

In asking around in my own extended family, I find no food allergies at all until my niece’s and nephew’s generation.  Not one.  My extended family is quite given to a Mediterranean diet and not a Western one.  The elders are all big gardeners and are more likely to pick and squish a tomato worm than to spray a bunch of poison around the yard.

Science is showing us something much more cunning hiding in our food supplies.  The food industry, so closely tied to big agriculture, is about maximizing profitability.  And thus came the “engineered” food.  I’m not talking about GMOs – not exactly – not yet.  During the 1990’s, certain kinds of proteins were engineered that were cheaper to produce than those acquired from natural sources.  Research indicates that no human trials were done with these new proteins before or after they were introduced into our food supplies.

The first food to be subjected to this nefarious scenario was milk.  Milk is the number one food to which people will present an allergic reaction in the US.  During this time, dairies introduced the use of an engineered growth hormone in order to increase the milk produced by their cows.  It did that, to be sure, but it also compromised the immune systems of the animals producing the milk.  So they dosed these animals with more and more antibiotics, along with the growth hormone.  Keeping this vicious circle in mind, is it any wonder that we now have antibiotic resistant super-bacteria?

Thirty one countries on our planet refused to allow the use of the engineered growth hormone, known as rBGH, because no testing had been done to establish its safety for consumption by humans.  The US chose to allow it because it HADN’T BEEN PROVEN DANGEROUS.  This hormone boasts the testing record of ninety days on thirty rats before being introduced to the most widely consumed food group in the nation – dairy.

In closing, we’ve become so dependent on the processed, the quick and the convenient, that our very future – our children – are suffering for the bad choices that we have allowed.  Until we take back our power and own our responsibility in demanding safe foods, growing our own and supporting sustainable local agriculture, the incidents of life-threatening food allergies will become our history as well as our future.