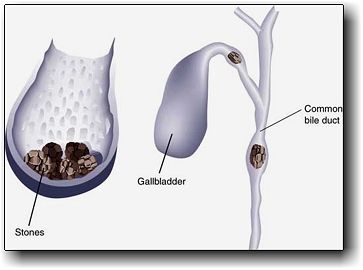 Gallstones are hard, crystalline, and pebble like deposits that form in the gallbladder. Millions of people over the world are affected by gallstones, and females are twice as likely to suffer from this condition as men. Gallstone formation can also be prevalent in families, and the main types of gallstones are:

The gallbladder’s natural function is to store the bile produced by the liver for better digestion and fat absorption in the first part of the small intestine known as the duodenum. When the bile is saturated with cholesterol or excess bile salts, they may manifest in the form of stones and get deposited in the gallbladder.

Gallstone formation may be more likely in people who:

Apart from the above, the risk of gallstone formation also increases if an individual’s gallbladder is unable to ‘flush out’ excess bile.

A person suffering from this condition may experience the following symptoms:

Role of Diet in the Formation of Gallstones

Dietary modifications and the avoidance and consumption of certain foods are often recommended to those who are either suffering from gallstones, or are at a risk of developing them. A fiber rich diet including foods like soy fiber, oat and wheat bran, and fruits and vegetables has been known to prevent gallstone formation by controlling the solubility of cholesterol in bile.

The consumption of fatty foods on a regular basis can elevate blood cholesterol levels and make one more vulnerable to gallstones. Following a low fat diet can prevent gallstone symptoms even though doing so cannot guarantee that stones won’t be formed altogether.

Vegetarians have a lower incidence of gallstones as compared to those who frequently eat meat, and that’s because animal fats and foods that are deficient in fiber curb the absorption of bile acids by the liver and trigger gallstone formation. As a result, those with gallstones must completely avoid consuming:

Though the above list may seem exhaustive, the fact is that most such foods figure on the ‘to avoid’ list of those who are pursuing wellness and a healthy lifestyle in any case. Meat eaters can opt for healthier white meats like chicken, turkey, fish, and seafood instead of red meat, which is high in fat and cholesterol. If dairy consumption is best avoided, one can look to soya and vegetable proteins like lentils and beans. Plenty of vegetables, fruits, sprouts, whole grains, and the consumption of healthy fats like olive oil and Omega 3 and Omega 6 can work wonders for people affected by gallstones.

Although surgery in the form of a laparoscopic cholecystectomy and other treatments like bile acid dissolution and mechanical extraction are well-known procedures for the removal of gallstones, there are some natural remedies that can either prevent the onset of this condition or control it.

Wild yam and herbs like rosemary, dandelion, and milk thistle boost bile production, thereby reducing the concentration of cholesterol and salts in the bile and preventing gallstone formation (sometimes even helping in flushing out the stones). One can make a tincture or tea of dandelion and young milk thistle leaves and even steam them.

Another gradual but effective remedy is to create a mixture of 20 ml olive oil, the juice of half a lemon (the juice of the other half is to be had by itself later on in the day), and a clove of finely sliced garlic and consume it.

Other natural foods that have been known to dissolve gallstones include beetroot juice, radish, turmeric, chamomile tea, apples, and pears.

Even though natural foods have little or no side effects, it is recommended that you consult a certified doctor or naturopath prior to trying out any of the above mentioned remedies.