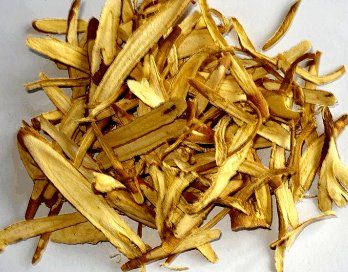 Licorice root is a gem for the mouth: It promotes anti-cavity action, reduces plaque, and has an antibacterial effect.

According to a new study in the Journal of Natural Products, licorice root may help keep teeth healthy.

The authors report that compounds found in the dried root of the licorice plant may help prevent and treat tooth decay and gum disease.

Licorice root is among those medicinal herbs that aren’t true herbs (technically, herbs refer to dried leaves and/or grasses). The plant itself is actually a legume, related to beans and peas, and like other legumes, produces pods containing the seeds of the plant which can be boiled and eaten like any other bean. It is native to the Mediterranean region of Europe (it is a primary flavoring in the popular Greek liqueur known as ouzo) as well as parts of Asia. In the U.S., it is the predominant flavor of that unique American beverage, root beer.

Licorice root is also included among the extensive list of Chinese herbs used both in the kitchen as a spice and in the traditional medicine of that country.

Traditionally, licorice root is among the medicinal herbs that have been used in naturopathic treatments for its expectorant properties.

Chinese licorice root, which is found in northern mainland China, has been used for centuries there and it is only recently that western science has been alerted to its potential in reducing inflammation, fighting viruses, and healing ulcers.

“Licorice is used in many Chinese herbal prescriptions as a guide drug to enhance the activity of other ingredients, reduce toxicity, and improve flavor,” the authors write.

However, it has not been tested extensively in the West. According to the National Center for Complementary and Alternative Medicine (NCCAM), clinical trials of an injectable form of licorice root – not available in the U.S. – have shown beneficial effects against hepatitis C.

However, the researchers write, “there are not enough reliable data to determine whether licorice is effective for any condition.”

Tooth decay is the most prevalent chronic disease in the U.S. According to the National Institute of Dental and Craniofacial Research, an estimated 92% of American adults and seniors have had some form of tooth decay, while 59% of teens and 42% of children aged 11 and under suffer from it.

The two predominant compounds in licorice, licoricidin and licorisoflavan A, were found to be the most effective in inhibiting the growth of cavity-causing bacteria.

These and other compounds found in licorice root were also shown to prevent the growth of bacteria associated with periodontitis, an inflammatory disease that can destroy the bones, gums, and tissue that maintain teeth.

Probably the most outstanding herbal remedy for mouth sores is licorice root, a potent anti-inflammatory and tissue healer. Put a pinch of powder on the sore, or suck on a lozenge made from DGL (de-glycyrrhizinated licorice).

Although licorice root extract may prove beneficial, it does come with risks. According to the NCCAM, it’s unknown whether it is safe to take licorice root supplements for more than four to six weeks. Forms of the supplement, which contain glycyrrhizin, can raise blood pressure, lower potassium levels, and cause salt and water retention when taken in large amounts.

People with high blood pressure or heart disease should be cautious when using licorice; pregnant women should avoid taking licorice as a supplement and should not eat large amounts of licorice in food.

Your teeth are a reflection of your whole body. If you are healthy, your mouth will be healthy. Teeth, gums, and bone can heal. Give these techniques a try. You’ll be pleasantly surprised at how well they work.