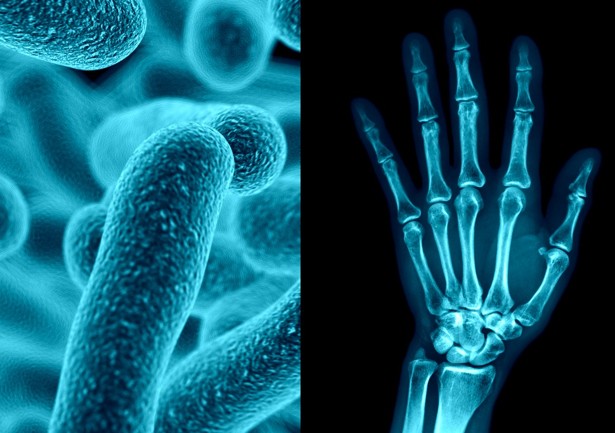 A growing body of research is pointing to gut bacteria as being a possible trigger for autoimmune disorders such as joint pain. This post from The Atlantic throws light on what science has found to be a likely cause of joint pain.

Doctors aren’t entirely sure what triggers rheumatoid arthritis, a disease in which the body turns on itself to attack the joints, but an emerging body of research is focusing on a potential culprit: the bacteria that live in our intestines.

Several recent studies have found intriguing links between gut microbes, rheumatoid arthritis, and other diseases in which the body’s immune system goes awry and attacks its own tissue.

A study published in 2013 by Jose Scher, a rheumatologist at New York University, found that people with rheumatoid arthritis were much more likely to have a bug called Prevotella copri in their intestines than people that did not have the disease. In another study published in October, Scher found that patients with psoriatic arthritis, another kind of autoimmune joint disease, had significantly lower levels of other types of intestinal bacteria.

This work is part of a growing effort by researchers around the world to understand how the microbiome—the mass of microbes that live in the gastrointestinal tract—affects our overall health. The gut contains up to a thousand different bacteria species, which together weigh between one and three pounds. This mass contains trillions of cells, more than the number of cells that make up our own bodies. Over the past several years, scientists have compiled a growing collection of evidence that many of these bugs may have a major effect on our well-being, with some triggering chronic, non-infectious ailments such as rheumatoid arthritis, and others protecting against such diseases.

“It’s become more and more clear that these microbes can affect the immune system, even in diseases that are not in the gut,” says Veena Taneja, an immunologist at the Mayo Clinic in Rochester, Minnesota, who has found clear differences in the bacterial populations of mice bred to be genetically prone to rheumatoid arthritis. In those more susceptible to the disease, a species of bacteria from the Clostridium family dominates. In mice without arthritis, other strains flourish, and the Clostridium strains are scarce.

“This is frontier stuff,” says Scher, the director of the NYU’s Microbiome Center for Rheumatology and Autoimmunity. “This is a shift in paradigm. By including the microbiome, we’ve added a new player to the game.”

Scientists are especially intrigued by how these bacteria influence the immune system. In recent decades, the incidence of many autoimmune diseases has been increasing; many microbiome researchers argue that at least some of this rise is due to changes in our bacterial ecosystem. Altered diet, the explosion of antibiotic use, and decreasing contact with the microbe-packed natural world of animals and plants have all combined to transform the bacteria that call humans home. “Our microbiome has changed significantly over the past century, and especially over the past 50 years,” says NYU microbiologist Martin Blaser, who puts much of the blame on widespread use of antibiotics. “We’re losing microbes with each generation; they are going extinct. These changes have consequences.”

Blaser points to his own research on a species of bacteria called Helicobacter pylori (so named because it looks something like a helicopter). He sampled the gut bacteria of a group of U.S. children, and found that Helicobacter pylori existed in only 6 percent of them. By comparison, other research has shown that the strain is common in the vast majority of people from many parts of the world, especially in developing countries. The decline of Helicobacter pylori in the West, which is likely related to the spread of antibiotics as well as improved sanitation, may have medical consequences: Some research indicates that the bacteria may reduce the risk of asthma, perhaps by curtailing the body’s immune response to airborne stimuli. Blaser suspects that asthma is one of the illnesses affected by our changing microbiome: Rates in the U.S. have been climbing for three decades, and grew by more than 28 percent between 2001 and 2011.

Blaser argues that H. pylori and other gut microbes are so deeply involved in our bodily operations that they shouldn’t really be considered aliens. “They are part of who we are,” he says. “These organisms are part of our developmental choreography; they have an enormous amount to do with how our immune system develops.”

In fact, these bacteria have a powerful vested interest in controlling how our bodies respond to interlopers. Blaser and others say that it appears that many of the bugs that live inside us have thrived by modulating the immune system to avoid being recognized—and attacked—as invaders; in essence, these organisms train immune cells not to be trigger-happy. A microbiome with the wrong sorts of bugs, or the wrong ratio of bugs—a situation known as dysbiosis—may unbalance this immune system, causing immune cells to assault not only bacteria, but also the body itself.

Microbes are especially influential in the gut, which houses two-thirds of the body’s immune cells. As the pathway for digestion, the gastrointestinal tract must deal with a constant stream of food-related foreign microbes, which must be monitored and, if they are harmful, destroyed. To do this, our intestines have developed an extensive immune system, whose effects reach far beyond the gut. Immune cells in the gut seem to be able to activate inflammatory cells throughout the body, including in joints.

But while many scientists are confident of the link between the microbiome and arthritis, they haven’t pinned down what particular role bacteria play in triggering the disease. Scher says Prevotella copri may stimulate an immune reaction that then targets joint tissue. Or it may crowd out beneficial microbes that keep immune-system attack cells being too aggressive [a theory supported by the fact that people with high levels of Prevotella copri also had reduced amounts of the bacteria Bacteroides fragilis, which seems to restrain the immune system. Scher suspects that a similar mechanism may explain the results in the psoriatic arthritis study; the missing microbe species—Akkermansia, Ruminococcus, and Pseudobutyrivibrio—may signal the immune system to ease off.

Scher thinks that eventually, it will be possible to treat arthritis by adjusting the microbiome. Dozens of researchers, including Scher and Blaser, are looking into a range of potential strategies to use bacteria as medicine for immune disorders. Already, millions of Americans ingest probiotics—cocktails of supposedly beneficial bacteria that claim to treat everything from acne to insomnia. Scher, like many microbiome scientists I spoke to, is skeptical that these products are useful. “Probiotics are generally safe and almost completely untested,” says Scher. “There’s this idea that you can simply replace certain bugs that are missing. I don’t think it’s as simple as that.” For one, he says, it’s not clear whether most microbes from probiotics can survive the digestive process.

Scher puts more faith in modifying the microbiome through diet. He notes that some patients with rheumatoid arthritis have benefitted from cutting out meat, or adopting a Mediterranean diet (high in fish, olive oil, and vegetables, and low in meat and saturated fat), though scientists don’t know exactly why this helps. In a separate study, Finnish researchers found that a vegan diet changed the gut microbiome, and that this change was linked to an improvement in arthritis symptoms.

Others are focusing on particular bugs over diet. At the Mayo Clinic, Taneja has found that a species of Prevotella bacteria, P. histicola, can prevent or halt the mouse versions of both rheumatoid arthritis and multiple sclerosis, an autoimmune disease of the brain and nerves. She is hoping to begin studies on humans in the next few months.

And some scientists are focusing not on the microbes, but on the compounds they produce. B. Fragilis, for instance, may ease autoimmune disease by releasing a molecule called polysaccharide A, or PSA. Harvard University microbiologist Dennis Kasper, who discovered the compound, has found that when given PSA, mice are protected from certain autoimmune diseases, including MS.

Kasper says PSA may be a more effective and reliable way to modify the immune system than adjusting the balance of microbes. PSA also has an advantage over medicines now used for autoimmune disease, Kasper says: It is subtle. Rather than suppressing the entire immune system—an approach that has obvious disadvantages to the patient—PSA instructs immune cells to continue to patrol without going after harmless targets. “This is a molecule that we have lived with for eons,” Kasper, who has recently begun working on ways to turn PSA into medicine for humans, told me. “We know that our bodies can live with it.”

Right now, doctors aren’t using microbes or their metabolites in patients with arthritis or M.S., but Scher, like Kasper, is optimistic: “In 10 or 15 years I think the microbiome will be a key therapeutic option for some of these diseases,” he says. “There will be challenges, but I don’t see why it can’t happen. This isn’t science fiction.”

via Joint Pain, From the Gut