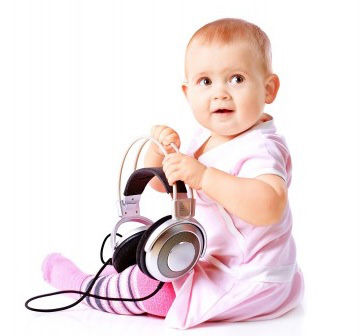 (BeWellBuzz) Infants can bring the greatest wonder to the most uninterested eyes – their tender skin and the smell of innocence makes one want to protect and nourish them. Often many people fail to look past their seemingly blank expressions and their lack of coordination. Infants have the potential to learn and develop skills much faster than adults. Their brain is like a sponge that is willing to soak up all the information it can get, so long as it is in an environment that is conducive for it. There are several scientists in the world who have realized this potential and have created a variety of atmospheres for infants and studied their responses.

When a baby is born he or she is already able to recognize familiar songs and distinguish between the voice of his or her parents and any other voice. Babies show a marked preference for a song sung by their own mother or father than a song on a CD or TV.

What Research Says about Music & Babies?

Dr. Laurel J Trainor is a Professor and The Director of the Auditory Development Laboratory at the McMaster University. His main interest is to study the response of auditory signals in the brain of infants and children. Sophisticated techniques such as EEG and MEG were used to determine brain responses.

There were several questions such as – ‘Can infants recognise tunes’? ‘What aspects of the musical structure do they encode? How do infants perceive pitch and melodies? How is rhythm perceived? What is the relation between music and movement?

Dr. Laurel Trainor collaborated with David Gerry, a flute teacher in Toronto to answer the questions. In this study, one set of one year old infants were made to participate in interactive music lessons with their parents where they learned small nursery rhymes and created small pieces of music together.  Another set of infants were made to listen to ‘Baby Einstein’ music recordings in the background, while they played with their parents at various toy stations.

Music Can Positively Impact Your Baby

Prior to these studies, both groups of babies showed similar communication skills and neither had participated in any musical sessions in the past.

The infants who participated in the interactive sessions showed more focus, better communication skills with their parents and they smiled more often! In fact, these infants showed even better situation handling abilities. They showed relatively lesser distress when placed in unfamiliar situations or when things did not go their way.

Dr. Trainor says “Many past studies of musical training have focused on older children. Our results suggest that the infant brain might be particularly plastic with regard to musical exposure”. This shows that an infant brain has greater learning abilities and is capable of developing acumen.

“There are many ways that parents can connect with their babies,” says study coordinator Andrea Unrau. “The great thing about music is, everyone loves it, and everyone can learn simple interactive musical games together.”

The Role Of Music In Building The Baby’s Brain

Dr. Diane Bates suggests that music helps to create pathways in the brain. An infant’s brain has several million brain cells and the connections of these brain cells with each other are responsible for the musical connections made. Listening to classical music can improve spatial reasoning on a temporary basis but learning of musical instruments can enhance thinking skills for a longer period of time.

This does not mean that music can make children smarter. But, what it can do is improve thinking which results in better logical reasoning which, for example, can help a child solve puzzles quicker.

Things You Can Do For Your Baby

Baby Einstein is one of the most popular programs for kids. They offer many award-winning series that your baby will enjoy.

So play music and sing to your baby, so he or she can experience those great benefits that music provides.