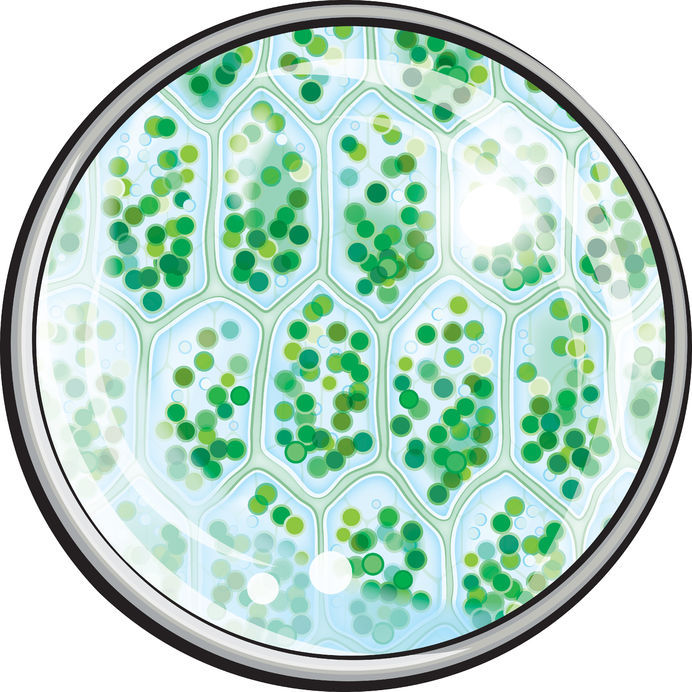 (BeWellBuzz) Chlorophyll is the green pigment in plants that facilitates photosynthesis. Photosynthesis converts sunlight into the chemical energy we call oxygen and carbohydrates. This substance is one of the main reasons for the health benefits of green veggies.

Although scientists had previously examined chlorophyll, it was Richard Wilstatter, the winner of the Nobel Prize in Chemistry 1915, who recognized the similarity between hemoglobin and chlorophyll. According to the report of the Nobel Committee Chairman, Wilstatter “produced the most interesting and decisive proof of the relationship between the two most biologically important pigments in Nature – hemoglobin and chlorophyll.” Perhaps this is why chlorophyll is sometimes nicknamed “plant blood,” and why many use it to promote both cleansing and building of the blood, and improved circulation.

Whatever its anecdotal reputation has become, “plant blood” has been studied for centuries, and is still being examined today for its healing powers. Here are some of those studies, and what they have to say about whether humans can or should benefit from dietary chlorophyll.

Lab observations show that chlorophyll binds with carcinogenic molecules, thus blocking their absorption in the body. Much attention has been given to its protection against a particularly dangerous toxin, responsible for a deadly form of liver cancer.

Aflatoxins (AFB1) are toxins, or poisons, found in moldy corn, peanuts, and other grains, seeds and legumes. Negligible amounts may be present in the world’s food supply, but in tiny amounts aren’t considered dangerous. In the US, the FDA carefully scrutinizes high risk foods, such as peanuts and peanut butter, to ensure safety. However, in some populations where food is less or completely un-regulated, people are swallowing the toxins in dangerous quantities and over many years. According to a report by the Linus Pauling Institute (LPI), AFB1 survives the digestive process and makes it into the liver. The liver then metabolizes it into a carcinogen that’s able to bind and mutate DNA (mutagenic activity).

Scientists will need more time to assess the long-term effects of chlorophyll in preventing this and other forms of cancer, but multiple studies are shedding light and bringing hope. On the down side, chlorophyll treatment alone isn’t showing results in killing a tumor once it’s formed; but several animal studies show that the green pigment inhibits the development of cancer even in the presence of AFB1. George S. Baily, PhD, professor at Oregon State University and one of the leading researchers on the team reported, “Volunteers receiving chlorophyllin[1] had a 55% reduction in the urinary aflatoxin exposure biomarker compared to those receiving placebo… [For] pennies per day, chlorophyllin supplements may cut the liver cancer death rate in aflatoxin-exposed populations in China and elsewhere at least by half.”

Experts believe that chlorophyll has chemoprotective and anti-mutagen powers that go far beyond AFB1 induced liver cancer. Studies are expensive because they require long term observations, but are reportedly underway.

If you’ve ever heard that chlorophyll was effective for “detox,” it’s partly because it binds with toxic molecules and helps the body to flush them, and also because of its chelating activity; ie its ability to bind heavy metals in the blood such as mercury and transport them out from the body. Thus, it gets its credit as detoxifier, blood purifier.

Halitosis is the fancy name for bad breath. Even as it reduces bodily odors, chlorophyll is known for assisting in digestion and cleansing the colon. Because toxicity in the colon is often credited as a cause of bad breath, some clinicians speculate that this is the reason that chlorophyll helps to banish the unsociable condition. In an article published July 1950 by Time Magazine, a Dr. Westcott reportedly began administering chlorophyll to “make healthy people smell sweeter, inside & out.” He found that 100mg daily nixed bad breath, “BO,” even menstrual odors and foul-smelling urine and feces. Try taking it internally and also using it as a gargle.

Along similar lines, in the 1950s clinicians recommended chlorophyll applied both internally and externally for patients with colostomies and ileostomies to help reduce the odor of feces. Rather than simply placing drops of the green juice to affected areas, people could drink therapeutic doses and/or take baths with chlorophyll in the water. Patients suffering with incontinence as well as common body odor also saw the benefits.

The effective daily dose had to be 100mg or more, specifically, 100-300mg, when taken internally.

According to the report by LPI, research in the 1940s found that this green pigment actually slowed the progress of anaerobic bacteria in wounds, and quickened healing. A more recent study of a formulation containing chlorophyll, urea and papain verified its effectiveness in healing wounds 30% faster with decreased risk of contamination. Taken internally and externally chlorophyll may help your body to build and protect healthy strong cells and vibrant tissues, enhancing your body’s natural ability to ward off infection and regenerate skin cells.

The primary structural difference between hemoglobin and chlorophyll is that hemoglobin has iron at its center, and the plant substance has magnesium. According to a report by Dr. Mercola in 2012, 80% of Americans are likely to be deficient in this vital mineral. Magnesium plays a role in energy production, formation of healthy bones and teeth, heart health and regulation of blood sugar. Mercola reports that magnesium may be a therapeutic treatment for fibromyalgia, PMS, migraine, Type 2 Diabetes and aging, as these ailments may also be symptomatic of a deficiency.

All green vegetables contain chlorophyll, and spinach is typically praised as the most highly concentrated. According to the LPI report, 1 cup of spinach contains 23.7mg of chlorophyll.  Then comes parsley with 19.0 mg per ½ cup; garden cress with 15.6mg per cup; and green beans at 8.3mg per cup.

Other supplement forms include spirulina and chlorella. These have little research to back their health promoting efficacy, but they are rich in chlorophyll, as well as protein and vital nutrients, and are considered “superfoods.”

Dosage, Side Effects or Contraindications

Chlorophyll isn’t standardized, so there is no official dosage, and no official prescription to treat any of the above or any other ailments. However, it’s also non-toxic. Recommendations are usually in the range of 100-300mg per day, probably most often taken as three servings of 100mg each.

If you want to try chlorophyll, you might want to start slow. Not far different from eating lots of raw roughage, it can loosen the stool. You may find greener feces, too. Sorry about that, but it’s nothing serious, no more than the similar results of eating lots of red beets.

Women who are pregnant or breastfeeding are cautioned about using chlorophyll, as not enough is known about the possible effects of taking it as a supplement.

[1] “Chlorophyllin is a semi-synthetic mixture of water-soluble sodium copper salts derived from chlorophyll.” -Linus Pauling Institute http://lpi.oregonstate.edu/infocenter/phytochemicals/chlorophylls/#disease_prevention In other similar and unrelated studies, chlorophyllin was shown to be slightly less effective than its all-natural counterpart.