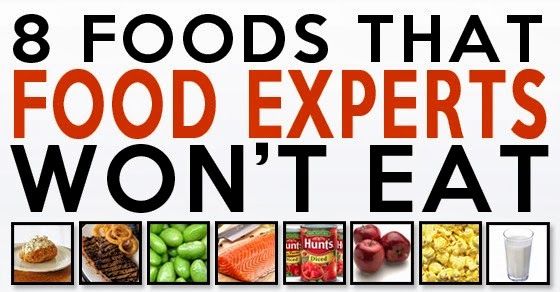 Food experts are enlightening us almost weekly on the crazy amounts of chemicals and toxic substances found in the foods we eat.  Fortunately for us, they are also choosing to provide us with more and better information on making healthier choices.  There a many experts – scientists, health care professionals and food producers – who simply steer completely clear of many of the foods you would likely find in your refrigerator or pantry RIGHT NOW!

And they are sharing both their opinions as well as the hard science behind their positions!

Eating healthy is all about choices…choosing foods that are produced and marketed with as little processing as possible.  Truly whole foods.  Organic is always best.  Bear in mind, this list is not at all like the “Deadly Dozen” list of pesticide-laden fruits that we’ve seen floating around the internet.  This is some education, some information and some alternatives so that you can make better choices in the foods you and your family eats.

Why:  There is a substance that lines all cans used for food products, called bisphenol-A.  It’s basically a synthetic hormone that has been associated with a host of health issues including heart disease and diabetes.  Here’s the deal, acids – like tomatoes – causes BPA to essentially percolate into your food.  Dr. Vom Saal tells us, “You can get 50 mcg of BPA out of a one liter tomato can.  That amount is going to impact people, especially young people.  I won’t go near canned tomatoes!”  Pretty telling, don’t you think?

Instead:  Grow and can your own in glass containers, purchase tomatoes already in glass or purchase in those cool, recyclable Tetra box containers.

Why:  All cattle are meant to eat grass, period.  Today’s factory farmers stuff beef cattle full of corn and soybeans in order to get these animals ready for processing as quickly as possible.  This equals a nutritionally inferior “meat product”.  Studies conducted by both university researchers and the US government found that grass-fed beef is significantly higher in a laundry list of elements that our bodies need to function properly.  Vitamin E, calcium, magnesium, potassium, and omega 3s to that list.

Instead:  Choose grass-fed beef.  If you can’t find it locally or though your CSA co-op, ask around at your local farmer’s market or purchase at stores like Whole Foods.

Why:  Studies conducted by UCLA have shown that those microwavable bags are jam-packed nasty stuff and compounds that have been linked to pancreatic and liver cancer.  When the bags heat up, the lining releases a noxious cocktail of vapors that absorb into your popcorn.  “These compounds accumulate in the human body and hang around for years,” Olga tells us.

Instead:  Pop your organic corn kernels using coconut oil in a stainless pot with a lid.  Toss it with some cool flavorings like garlic powder, organic soup mix, real butter or whatever dried herbs you like.

Who:  Jeffrey Moyer, Chairman of the National Organic Standards Board, Farm Director, The Rodale Institute

Root vegetables of all kinds soak up all of the –cides that leach into the soil from the plants themselves and the surface of the soil.  Herbicides, pesticides and fungicides – Oh, my!  As if that weren’t enough, after they’re harvested, they’re treated to a bath of anti-sprouting agent.  “I’ve been told by commercial potato producers that they would never eat the potatoes they sell,” says Moyer.  The potatoes the producers eat are grown separately without the toxins.

Instead:  Insist on organic.  Even washing won’t get out the stuff you’re trying to avoid; potatoes are practically marinated in poison.

Who:  Dr. David Carpenter, Director, Institute for Health & The Environment, University of Albany.

Why:  Well, for one thing, in the wild, salmon dine on krill, shrimp, and other, smaller fish.  On the fish farm, they’re fed corn and soy based pelletized feed that also happens to include hydrolyzed poultry feathers.  Yum!  This alone makes farmed salmon much lower in the elements for which we eat salmon in the first place.  Secondly, farmed salmon is full of mephitic substances like carcinogens, flame retardants, antibiotics, and pesticides like DDT.  Carpenter tells us, “Salmon farmed in Northern Europe is found being served in many US restaurants.  You could safely eat THIS fish once every FIVE MONTHS without increasing your cancer risk.”

Instead:  Insist on wild caught Alaskan or Pacific salmon ONLY.  If you’re looking at a package of frozen salmon that identifies it as having come from the Atlantic ocean, drop it and walk away.  There are no fisheries left from which you can purchase wild salmon from the Atlantic.

What:  Milk produced with synthetic hormones

Why:  Commercial dairymen treat dairy cows with grown hormones – either rBGH or rBST – to force these cows to produce more milk.  Because of these synthetic hormones, the udders of the cows are damaged, more prone to infections and certain parts-per-million of pus is allowed by the USDA in the milk supply.  Don’t you just want to rush out and buy some milk NOW?  Consuming milk containing this hormone forces the body to produce higher levels on a hormone known as “insulin-like growth factor”.  In humans, this contributes to more risk for breast, prostate and colon cancer.  “It was believed that IGF-1 would be broken down by the digestive system,” North tells us.  “It is interesting to note that rBGH is banned in most industrialized countries but not in the US.”

Instead:  If you can find it for sale, raw milk really is best, or read the labels on the milk you buy to ensure that it is clearly noted that it is rBGH- or rBST-free, does not contain artificial hormones or is organic.

Why:  Genetically modified foods have garnered massive concern in the last few years due to DNA and genetic coding that can transfer between species.  Soy has been found to affect human hormone production and balances as well as causes cancer.  Over eighty percent of the soy grown on this planet is a GMO.  The only soy food product truly safe for humans is the fermented varieties.  And, even then, make sure that the soy is coming from an organic source.

Instead:  Carefully read the labels and make sure that your soy product is fermented, non-GMO and organic.

Why:  Commercially produced apples are soaked in more pesticides than any other fruit.  Due to the grafting process utilized to create the trees from common root stock, apples are not able to develop any resistance to insect pests and get doused with pesticides frequently.  Of course, the producers of both the apples and the pesticides argue that the slag left on the fruit is not harmful.  Kastel responds to this position, “Farm workers have significantly higher rates of many forms of cancer.”

Instead:  Grow your own, buy local from a farmer you trust or buy organic.