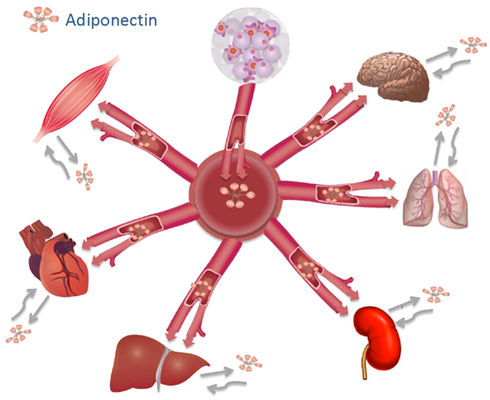 (BeWellBuzz) Alongside recent discoveries concerning a certain protein, has come a slow and steady influx of supplements and now developing drug treatments to enhance, improve, or mimic the protein’s action in the body. It’s called adiponectin and is already becoming the talk of the town. Be aware, however, that much more research is needed to understand the complex interactions between adiponectin and various other hormones, systems and functions of the body.

Adiponectin is also referred to as GBP-28, apM1, AdipoQ and Acrp30. The term is made up of two derivatives, adipo meaning “fat,” and nectin meaning “protein.” It is a protein secreted from adipose tissue and from the placenta during pregnancy. The protein is also a hormone that regulates multiple metabolic processes. Based on research in the past ten years, AdipoQ is now being considered a key to preventing or even treating metabolic disorders such as insulin resistance and diabetes 2, promoting heart health, weight loss and maintaining a healthy lean body.

*THINK CRITICALLY! While these findings have interesting and exciting implications, always remember one of the golden rules of science: association does NOT equal causation. Association of low adiponectin with these conditions could be symptomatic, rather than causative, which means simply changing adiponectin levels doesn’t necessarily “cure” a condition. Researchers don’t fully understand why these hormones decrease, and others increase, before and during the conditions listed. When considering a treatment, don’t be scared, but do be knowledgeable.

Conditions associated with low levels of adiponectin include:

Studies reveal that GBP-28 is more prevalent in lean bodies, and when in abundance increases insulin sensitivity. It stimulates fatty acid oxidation, which means using fat as energy, aka fat burning. AdipoQ may inhibit production of glucose in the liver, instead stimulating the liver’s use of fat for energy. It’s also anti-atherogenic, showing properties that prevent inflammation and the formation of plaques that eventually cause atherosclerosis.

Some scientists are developing ways to specifically manipulate these hormone levels in order to achieve desired results; meanwhile others along with interested nutritionists and proponents of holistic health are looking at ways to improve adiponectin states through diet, exercise and other normal, natural activities. They have found that adiponectin increases during weight loss. There are also healthy foods and supplements that cause a rise in the fat burning hormone.

How to Increase Adiponectin Naturally

He didn’t just make that up. A review of scientific literature done in 2011 looked at 220 articles and 52 studies concerning diet and adiponectin. Here were their encouraging conclusions:

– Weight loss achieved with a low-calorie diet plus exercise increased adiponectin levels in the range of 18-48%.

– A 60-115% increase in adiponectin levels was obtained with fiber supplementation.

They still don’t know exactly what components of these factors actually caused the increase. More studies are underway.

In 2006, researchers looked at the Mediterranean diet to determine whether its health benefits might also be related to an increase in AdipoQ. They found that, indeed, test subjects that adhered closest to the diet had lower body mass, smaller waist size, higher caloric intake coupled with more physical activity, and greater levels of the protein hormone. The specific components showing the heaviest adiponectin concentration were nuts, whole grains and alcohol.

Another study found that 120 minutes of exposure to cold, as long as the study subject didn’t consume sugar/glucose prior, caused the desired effect of extra AdipoQ secretion. When shivering, it looks like the body will use glucose to produce heat if it’s present. Otherwise, the fat burning hormone will increase in order to trigger the use of adipose and generate heat to warm you up from the inside-out.

I hope this helps to give you a good language and vantage point to understand much of the emerging talk. If you want to go deeper in researching, see the studies sourced below. Wishing you excellent health and long life!