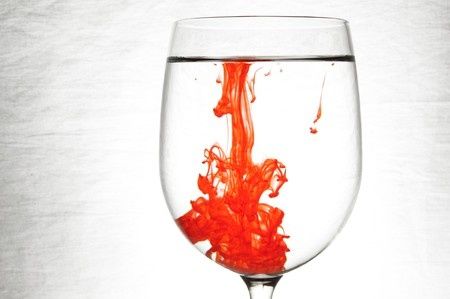 Archeological evidence suggests that dyes and other pigments have been used in food as far back as the ancient Egyptians1. Up until the Middle Ages, most people lived in, or very near, agricultural communities. They either produced their own food, or acquired it from local sources that were personally known, and the food was very fresh.

The Middle Ages ushered in a new era of fledgling industrialization, requiring more urbanization. A  large part of the population now had to live in larger cities, and get their food from unknown sources, in a completely different parts of the world. Preservative methods were developed such as canning, which was (and still is) very effective, but it does result in a certain loss of coloration and appearance. But most people in the Middle Ages were too poor and too busy to worry about their food’s appearance, they were glad to have whatever they could get2.

As industrialization improved, people became more affluent and a bit more demanding in their food preferences. To this end, food dyes were added to restore some of the appearance that was lost during processing. Many of these colorings were derived from harmful substances, such as arsenic, red lead, and mercury3. By the late 19th  century, laws were in place in most countries to limit the amount of dyes, and what types could be used in foods. In the United States, the Pure Food Act of 1906 reduced the number of allowable food colorings from over 200 down to just 7. Currently in the US, food additives are regulated by the Food and Drug Administration (FDA)4.

You might think that there would be no controversy over the use of these colorings since they are extensively tested before they are approved. You would be wrong. Medical and diagnostic technology is improving all the time. We know, or suspect a lot of things today that were unknown even just 10 years ago. Our understanding of ailments like cancers, lupus and Attention Deficit Disorder (ADD) is much more complete, and there is some concern that some of our food additives and colorings could be contributing factors5.  Current research indicates that some food colorings may be connected to certain types of cancers, and other ailments6, 7, 8, 9, 10.

If you are concerned and want to stay away from some of the foods that contain the most food colorings are snack foods, here’s a list:

Also, food coloring is added to meats, especially beef, to keep it red-colored (100% red meat quickly turns brown after being exposed to air) as well as conventional salmon.

As more research yields more facts in the matter, lets hope that both the FDA, and the food industry will react accordingly. Unfortunately they have failed many times before as they are funded by many corporations that are also behind the dangerous food additives. So we are as consumers should steer away from products with synthetic food dyes and many companies won’t survive long if it kills it’s customers off.

In the meantime, everyone should always read the labels on what they are buying, and don’t be afraid to ask questions. Your grocers are happy to help you in making informed choices.

5. “Food additives and hyperactive behaviour in 3-year-old and 8/9-year-old children in the community: a randomized, double-blinded, placebo-controlled trial“, Lancet, Sept 2007