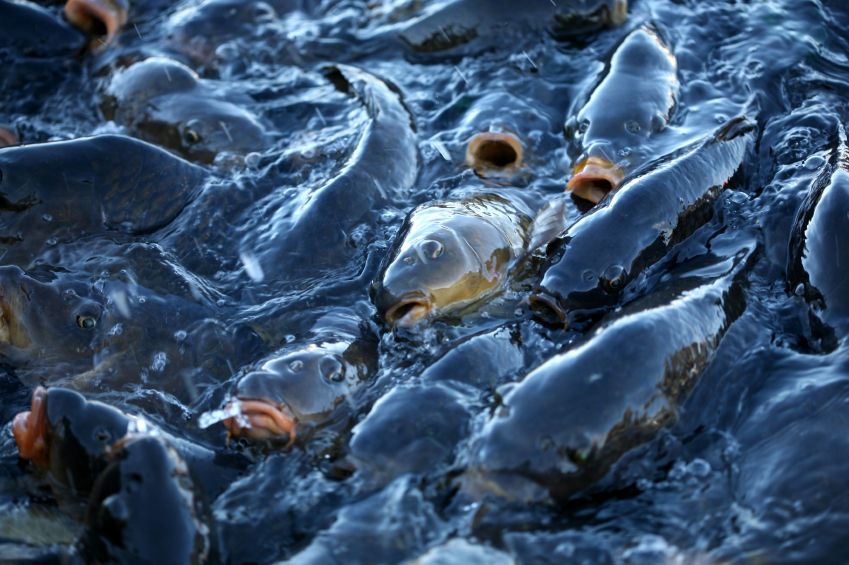 It seems that no one is ever happy. Groups complain about over-fishing, and depleted stocks, then gripe about ‘farmed’ fish when industry tries to do something about the over-pressured wild species. It’s just about like when people drive their cars to rallies protesting oil drilling, or complain about furs while wearing leather belts and shoes. There is so much mis-information and few-mongering out there that it is difficult to get any real information on the subject. Protesters skew or make up data regularly, or list issues that aren’t really issues at all, or at most, a minor problem that is already being addressed. Fisherman are trying to protect their industry until they can catch that last fish, and sell it for a million dollars. And no one listens to the real scientists and the fish-farming companies (the correct term is actually aquaculture...), because after-all,  they are just in it for the money (so, tell me again, why are fishermen in this???…), like this is a bad thing. In this article, I am going to attempt to separate fact from fiction, and give you the real story about aquaculture.

To start with, aquaculture is nothing new. People have been farming fish, and other aquatic wildlife and plants as far back as 6000BC, especially eels. The ancient Egyptians, and Romans were particularly adept at farming carp, oysters, and other types of aquatic life. The Chinese, and Japanese have been raising fish, crustaceans and aquatic plants since 2500 BC. Fish have been farmed by many European and Asian cultures all through the Middle Ages. In the modern world, fish are routinely raised for food, such as carp, catfish, oysters, shrimp, tilapia, salmon, etc…, for ornamental purposes, such as guppies, goldfish and other exotic (to us) species, and hatcheries raise game-fish so sportsman and sportswomen can have increased opportunities for their favorite pastime. So raising fish is a very old profession.

So what are the issues? Most of the derogatory attitudes only concern salmon farms, which are relatively new technologies.  The main one is sea lice. The concentrated populations of caged salmon can result in an increase in the incidence of sea lice, and other diseases, in the immediate area. But this happens with livestock and poultry production on land as well, and the salmon issue can be treated the exact same way, by the use of antibiotics, which do not harm the environment, people, or the wild fish, as long as proper guidelines and laws are observed. Most of the derogatory attitude about antibiotics comes from a single incident in Nova Scotia in the 1990s, where an aquaculture farm used illegal pesticides to combat sea lice, resulting in the death of several million lobsters across the bay. The company was fined,  and ordered to pay damages to the lobster fishermen, which they did, as well as firing those responsible. Both the lobster fishery, and the salmon farms are still in operation. The system worked like it was supposed to. A new lawsuit against the same company is underway to prevent the company from acquiring an additional 208 acres in St. Mary’s Bay acres for expansion, that has already been approved by the government of Nova Scotia. The protesting group, mainly the lobster fisherman’s union, LFA # 34, is represented by Ecojustice, formerly known as the Sierra Defense Fund, famous for bringing lawsuits on behalf of Tree-Huggers and Eco-Nazi’s. The lobster fisherman are upset mainly because they are afraid they will lose a few acres of lobster fishing grounds, out the entire Bay of Fundy. They claim that the herring fishery is gone, and lobster is all that is left, but the truth is that the herring are depleted due to over-fishing, not salmon farming. Even though environmental studies have been done, and have stated that it will not adversely or irreparably damage the local ecosystems, they claim the studies are flawed. There is no way to please them, even though the expansion will create over 400 new jobs, and bring in millions of dollars in new income to the area.

We’ve covered the sea lice issue, and it holds true for other diseases as well. They can be handled, and are handled, when the proper guidelines are followed. Another complaint is that fish feces accumulate beneath the cages contaminating the environment. This one is partially true. Just as on land, where livestock create tons of feces, salmon also answer the call of nature frequently. On land, this is addressed by collecting it and using it for fertilizer, generating even more income. But the salmon farms have a unique advantage, thats cost the farms nothing, especially for the farms in the Bay of Fundy. The Bay of Fundy has some of the most extreme tides on the planet, more than 50 feet, twice a day. Needless to say, the feces doesn’t stay under the cages for long, and gets dispersed into the Bay, where it can provide vital nutrients to the ecosystem. It is the same for other marine fish farms. Fresh water fish farms, such as catfish and tilapia, use a different method. They are raised in small, easily controlled ponds. The water is regularly flushed to remove feces, and the feces is either collected for fertilizer, or flows harmlessly back into the environment to nourish it, as nature intended. The only problem might be if a fish farm was established too close to a fragile coral reef, or similar environment. The solution in that case is to build the farm somewhere else. The ocean is huge, so this shouldn’t be a problem. That’s why they do environmental impact studies before issuing permits.

The next complaint about farmed fish is that many fish, like salmon, are predators, and require fish. Fish farms usually feed their fish pellets made from fish meal. Detractors say this can result in the depletion of bait-fish, but these fish are already being harvested for fish meal to be used animal foods, fish oil that you buy in stores, and fertilizer. And none of these forage-fish species are endangered, or even remotely under pressure, except in a few limited areas that allow too much harvesting in the same place. This is a result of poor fisheries management policy, not salmon farms.

The last complaint about the farms themselves are that some fish escape and interbreed with wild fish, making the species somehow weaker. Farmed salmon have not been around long enough to have any major changes in their DNA. Farmed and wild salmon are the same species with the same genetic traits and propensities. No study has ever confirmed that interbreeding between the small number of escaped salmon, with wild salmon, has any effect on the gene pool at all.  On the lunatic side, some have complained that they have caught ‘pink-skinned’ pollock, from interbreeding with farmed escaped salmon. This is laughable. First, salmon and pollack are incapable of interbreeding, naturally at least. A pollock is a member of the whitefish family. A hybrid could only be created by gene-splicing, and the result would probably not be viable. And, another complaint of farmed salmon is that they have grey flesh. So, how could an escaped farmed salmon create a pink-skinned pol-salmon? This is typical of the hysteria surrounding salmon fish farms.

OK, so the farms aren’t such a bad thing after all. But what about the nutritional values of farmed salmon?   A major complaint is that farmed salmon have grey flesh instead of white. Fish farms are accused of adding an artificial pigment to the feed to make them pink again. Once again, this is a half-truth. Wild salmon get their pink hues from the large amount of krill (very tiny shrimp) they consume in the wild. A pigment is added to all fish food, even that destined to feed aquarium fish (it’s the same feed)….ground up krill. Also, canthaxanthin is often added to the feed to make their flesh even pinker than wild fish. Canthaxanthin is a naturally-occurring pigment that has been used as a food additive in just about everything for decades. Canthaxanthin is also widely used as an ingredient in sunless tanning lotions.

Some of the claims do have some merit. Farmed fish are fatter that their wild counterparts. If you think about it, it makes sense. Farmed fish do not have to dodge predators, swim in current, leap waterfalls, or even look for food. They basically get to live as fish couch potatoes. Of course, they will be fatter. But fish fat is different than, for example, beef, or pork fat. Fish fat, and oil is unsaturated fat, which is more heart-friendly, and actually beneficial to some degree. Farmed fish do have less Omega 3 oil, but they still contain more than enough to make them a very healthy alternative to red meat. If you are really worried about getting enough Omega 3s, you can also get them from sources like flax seeds, fish oil, beans, walnuts, and a whole host of other foods. This is not a problem.

Many fear the level of antibiotics and toxins that may be present in farmed fish, but land-based livestock production involves the use of the same types of products, and so far, no one had died as a direct result of eating unspoiled beef, or chicken.

The bottom line is that all doctors and nutritionists agree that farmed fish are a good thing, and should be consumed regularly. They are safe, reasonably-priced, widely available, and ease the fishing pressure on their wild cousins.  Studies indicate that fish farms are sustainable, and when managed properly, do not constitute a threat to the environment. To date, no fishery has been irreparably damaged as a direct result of fish farms, and no one has died as a direct result of eating properly-stored farmed fish….in over 5000 years.  Aquaculture provides thousands of jobs, and millions of dollars in revenue to countless communities. So, the next time you get a taste for a grilled salmon steak, go ahead and indulge yourself. Chances are, it will be a farm-raised fish. Nothing will suffer as a result.