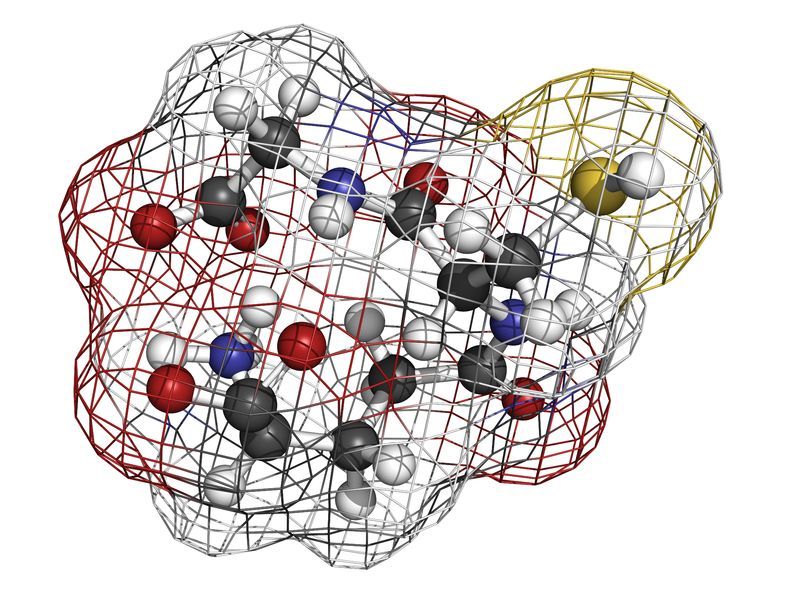 Glutathione lives in every, single, cell of your body. It repairs, protects and sends out signals to trigger a healing response wherever there is severe oxidative damage. The antioxidant is actually a protein formed by the three amino acids glycine, cysteine and glutamic acid. We get the “tres amigos” three-amino-chain either directly from foods, or else our ingenious bodies synthesize it from precursors such as glutamine or cysteine.

What Does Glutathione Do?

Richard A. Passwater, Ph.D. and contributor for the book of Glutathione: The Ultimate Antioxidant refers to the mighty molecules as foot soldiers.[1] He writes:

“Your body is under constant attack, and your health is at stake! The enemy? Toxins: environmental agents in our food, our water, our air – and our bodies. The foot soldiers in the battle against toxins are antioxidant molecules in your cells called glutathione.”

He explains that vitamin C is present as an antioxidant in the blood, helping to prevent damaging free radicals from gaining access to our cells. Vitamin E is in the cell membrane and in lipoproteins, providing further protection so that toxins can’t get inside the cell. But if free radicals get past these two defenders, glutathione is prepared inside the cell to neutralize the free radical, and recycle antioxidants.

Antioxidants such as vitamins C and E, as well as lipoic acid, are like bumble bees. They sting once, performing their duty to protect the hive, and then die. Once vitamin C has given up one of its electrons to neutralize a radical, it also becomes neutral…unless there’s some glutathione around. The master antioxidant not only does its own protective work, but it can resurrect a used antioxidant in its midst, thus doubling its capacity.

Of course, if glutathione is scant, the cell is in a deeply precarious situation, and so is our health.

The liver is your own personal detoxifying unit. A substance enters into the body. Any valuable nutrients it contains will be approved and released by the liver; any toxins will be captured. It’s no wonder that glutathione is especially concentrated in this heroic organ. The antioxidant contains sulfur, a sticky molecule which “chelates,” or attaches to toxic substances and heavy metals, and transports them through the bile out from the body. If glutathione is deficient in the liver, toxins accumulate. You can imagine why so many natural health professionals focus on increasing glutathione as a part of disease prevention and treatment. Glutathione is a major player in the body’s natural disease prevention, or wellness maintenance, whichever term you prefer.

Glutathione Deficiency: Cause and Effect

Deficiency is associated with cancer, arthritis, Alzheimer’s, Parkinson’s, heart disease, chronic fatigue, seizures, diabetes, autoimmune diseases and more. While some are born with a deficiency due to a genetic disorder, for most of us it’s the usual suspects “poor diet, pollution, toxins, medications, stress, trauma, aging, infections and radiation,” says Mark Hyman, M.D. practicing physician and founder of The Ultra Wellness Center.[2] The good news is that you can turn it around.

How To Increase Glutathione Levels

If you want to turbocharge your immune system, slow the process of aging, increase muscle, decrease fat storage, protect against disease and have more energy, then you’ll want to have lots of glutathione in your body. Although science did make an attempt to provide you with a supplement, it turns out this is a poor means for increasing the antioxidant in your body. Taking an oral supplement simply does not increase your blood levels of the antioxidant. Your best bet is going to be to eat foods that either contain it, or else contain its precursors.

Best foods to increase glutathione include:

But if you’re still looking for some variety, and because I know garlic can be tough to swallow raw, sources say you don’t have to eat all your veggies raw, all the time. One study showed that if you allow crushed garlic to sit for 10 minutes before exposing to heat, an enzyme called myrosinase increases, causing more sulfur compounds to express, and thus preventing a total loss of the disease fighting sulfuric compound by cooking.[4]

The same may hold true for cauliflower and other cruciferous veggies. Broccoli only slightly cooked (steamed) was shown[5] to release 3x more sulforaphane than fully cooked. Another study demonstrated that lightly cooked cabbage (max 5 minutes) produced highest levels of the glutathione precursors compared to fully cooked (7+ minutes).[6]  If you do wish do cook the crucifers, lightly steam them for no more than five minutes so that the color brightens and a nice crunch is retained.

Supplements that help to increase your body’s natural synthesis of glutathione include:

Regular exercise also boosts your levels, and melatonin has been shown to increase its activity in the brain.[7]

As soon as possible, you’ll want to eliminate the factors that deplete glutathione such as toxic loading through environmental pollutants, stress, poor diet and lack of exercise. Happily, the changes that will boost your levels of this amazing antioxidant are the same steps you’d take for any healthy way of life. Good food. Good exercise. Good rest. And no drugs.

Glutathione: The Ultimate Antioxidant by Alan H. Pressman with Sheila Buff and forward by Richard A. Passwater, PhD

[1]Glutathione: The Ultimate Antioxidant by Alan H. Pressman with Sheila Buff and forward by Richard A. Passwater, PhD