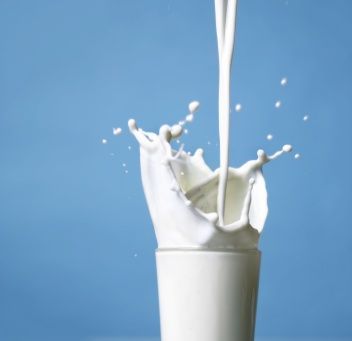 (BeWellBuzz) Milk is food. Pasteurized milk is depleted food. And the milk that comes from grain-fed, hormone-doused, antibiotic-pumped cows is an ingredient for dis-ease in the body. Now there are new initiatives to mess with the moo. This year dairy farmers petitioned the FDA to allow them to add aspartame to milk without naming the additive on an ingredients label,[1] and I think to myself: Are they trying to kill us? Aspartame is known to be toxic, associated with diabetes, migraines, weight gain, inflammation and obesity, to name a few. Oh, the risk is negligible, you say. It’s really not, in fact. And even if it was, the risk is unnecessary. But hey, maybe a little artificial sweetness will help industrialized dairy win back the buyers they lost when soy, rice, almond, coconut and other “milks” captured the interest, and dollars, of millions of Americans.

But they don’t know you and me. We’re not lured by candy the way we used to be. We’re looking for substance. Purity. Nourishment. And businesses with nothing to hide.

Milk is not only food, it’s good food. The right kind of milk really “does a body good.” So as the debate rages over what’s hot and what’s not and confusing headlines vie for our attention, it’ll be important for you to know about pasteurization- what it is; when, why and how it landed on the scene in the USA; and where nutrition foodies are taking it from here.

In short, pasteurization involves heating the milk up to either 150°F for 30 minutes, or up to about 280°F for a shorter time in order to kill off disease-causing microbes. (Next we’ll talk more about the why this process became, and remains, life-or-death-necessary for most dairies.)

In the heating process, much of the “life” of the milk is also destroyed, including all or portions of:

Chris Kresser, a well-known author, acupuncturist and practitioner of integrative medicine, has joined with a choir of singers reporting that the congestion, headaches and/or excess mucus which they once experienced with processed milk, they no longer experience with raw goat’s or cow’s milk; and in fact, they thrive on it.[4]

Whether or not you’re concerned about getting all the nutrients milk can offer, the question remains why would we buy depleted food which does not satisfy, or prefer milk whose life force has been cooked out? Why did we opt for it in the first place?

Unless you know the history, you might be surprised by the answer.

Raw milk was the only milk for thousands…and thousands of years. Heating milk past the point of no return officially entered the USA in the early 20th century, but we created the need for it in the 1800s when, like with so many things, production and profit began to take precedence over integrity. This is the stuff Ayn Rand was talking about in her books The Fountainhead and Atlas Shrugged, where the ones who had no honor nor took any pride in what they produced became the mass-producers.

Here’s a brief account of how the norm went from milk that was pure, fresh and unprocessed to heated and depleted pasteurized.

From Grass to Slop

After the War of 1812 Americans could no longer get their whiskey from the British West Indies, so we built our own distilleries. These produced a natural waste byproduct, such as from rye whiskey, known as distillery slop. The grain slop was produced in such abundance that some less-than-integrous whiskey producers figured it’d be slick (resourceful) to use it as cow feed. Cows are meant to eat living grass, not grain, and certainly not slop. The cows grew sick; many died; others were emaciated and malnourished. The milk they produced was weak, thin and disease laden. To cover up the appearance and taste, dairy farmers could add flour, starch or sugar. The milk wasn’t even quality enough to make cheese. The cows were in unclean conditions and the ones milking them were often sick or unhygienic themselves. [5],[6],[7]  So, of course the raw milk they sold was deadly. Disease spread. Children died. Fear gripped us. But was the problem raw milk, or dirty raw milk? Even when the cow is healthy and produces a perfect milk, if the udders are soiled, or the hand of the one milking, or the bucket to catch it, or the bottle to carry it is unsanitary then the milk will be contaminated and hurt people.

So when the option of pasteurization came along people jumped on it, and they still do. It allows for lower quality standards and a cheaper product.

Unfortunately our nation has fallen into the traps of greed and fear. When we let fear overpower us, we try to manipulate and control everything including our food supply and even people. This is what we see in our over-sterilization of real foods and in the mindset behind GMOs. When we allow greed to master us, whether by hoarding our own resources or stealing others’, we’ll even trade life and choose death, just to save a penny.

But if we refuse to compromise honor, integrity, and justice, and do all of our work in the interest of love, then we’ll do what’s right as buyers and sellers, as citizens and as human beings.