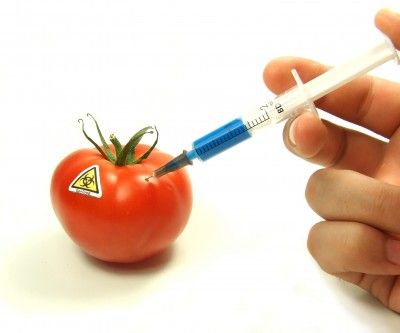 What is genetically modified food?

An estimated 60 to 70 percent of all foods on supermarket shelves today contain genetically modified ingredients. According to the U.S. Department of Agriculture, by the time you read this, 85 percent of the soybeans planted in the United States and up to 45 percent of the corn will be genetically engineered. It has been estimated that 70-75 percent of processed foods on supermarket shelves including soda, soup, crackers, condiments, baby food, pancakes, candy bars, and condiments contain genetically modified ingredients. That means if you are eating foods that contain vegetable oil, soy products like soy burgers, or any foods that are made with cornstarch, corn syrup, corn oil, or soy derivatives, there is a good chance that you are putting food that’s been genetically modified into your body.

The scary thing is that there’s no way to know for sure.

The government has not implemented a regulations system that would require producers of GM food to tell consumers that a food has been genetically altered or that it contains GM ingredients. What’s more, under current law biotech companies don’t have to inform the FDA or perform human testing before introducing a new genetically engineered food product. As a result, GM foods are flooding the marketplaces and millions of unsuspecting consumers are purchasing and consuming unlabeled genetically modified foods. Don’t be one of them! See below for tips on how to avoid eating GM foods.

How are foods genetically modified?

Genes can be likened to blueprints for each organism. Due to major advances in technology, scientists are now able to select genetic material from organisms such as plants, animals, or even microbes, and insert it into the permanent genetic code of another.

For example, a gene found in flounder that enables them to survive in cold water was transplanted into tomatoes so that they would become resistant to frost. Genes from soil bacterium are transferred into foods such as corn and canola so that they repel insects. Other examples of our tampering with Mother Nature include: Potatoes that contain bacteria genes, “super” pigs with human growth genes, fish with cattle growth genes, and thousands of other plants, animals, and insects.

These genetically modified creations are then being patented and released into the marketplace without having any idea about what the long term effects will have on the environment, ourselves, and our children. Several studies over the last decade reveal that genetically modified foods can pose serious health risks to humans, domesticated animals, wildlife and the environment. The effects on human can include: higher risks of toxicity, resistance to antibiotics, suppression of the immune system, and even cancer. The impact on the environment as a result of using GMO’s in agriculture could lead to contamination of non-genetically modified life forms and biological pollution which could completely through off Nature’s delicate balance.

The bottom line is: We need dozens of years of research before we start tampering with DNA because we don’t know what’s going to happen. How much do we know about genetics, anyway? DNA was just discovered fifty years ago. We need to seriously contemplate the implications of what tampering with Mother Nature could cost us. We could be destroying elements in our ecosystem permanently by introducing untested genetically modified foods and organisms. I suggest that you join me in the fight against genetically modified foods. The most powerful way to do that is NOT support GM products. Here are some tips on how to avoid these products.

How to avoid eating GMO foods:

Remember: Say NO to GMOs!