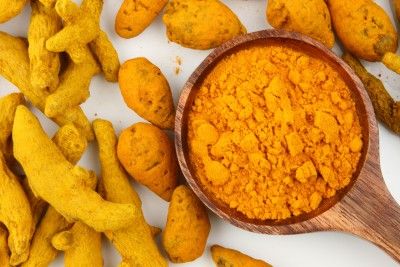 Known best as spice and coloring agent in Indian curry powder, the qualities of turmeric has not enjoyed much attention until a few years ago when researchers noted that certain diseases prevalent in the Western world were rarely diagnosed in India where it had been used for thousands of years. Research led to the knowledge that turmeric is yet another one of nature’s wonders.

It is clear why it enjoys symbolic status as the sun in traditional Indian rituals. Turmeric health benefits are numerous. It is loaded with powerful medicinal properties as it contains a hefty list of pharmacological ingredients such as vitamins A, C & E, minerals, proteins, phenolic compounds and volatile oil.

It’s primary ingredient and probably it’s most potent ingredient is curcumin. Studies have demonstrated that this orange-yellow pigment not only have significant anti-inflammatory properties comparable to over-the-counter anti-inflammatory agents and in some cases even to more potent prescribed drugs such as cortisone, but is also useful in an array of other medical problems. Recent animal studies suggest that turmeric is an effective treatment for inflammatory bowel diseases diseases such as Crohn’s Disease and ulcerative colitis. Although not sure exactly how, it is believed that the combination of antioxidants and curcumin in turmeric inhibits the infiltration of inflammatory cells, reduce mucosal ulceration and prevent thickening of the intestinal wall.

In arthritic diseases, free radicals are responsible for painful, swollen and stiff joints. Due to turmeric’s antioxidant properties, free radicals which cause damage to healthy cells and cell membranes, are neutralized, in it’s turn reducing inflammation. In a clinical study where curcumin was tested on patients with rheumatoid arthritis, improvements such as reduced joint swelling, less morning stiffness and lengthened walking time were noted.

Cystic fibrosis is a life-threatening genetic disorder that critically effects the lungs, pancreas, liver and intestine. An over-production of mucous causes lung infections and interferes with the body’s ability to absorb and digest nutrients, leading to serious medical problems. Researchers at Yale are confident that curcumin can be useful in the treatment of this disease as it could possibly help to prevent the build-up of mucus.

On the topic of cancer, much can be said, but in short, a number of laboratory studies on mice have indicated that curcumin has definite anticancer effects, seemingly able to inhibit and slow the growth of cancer cells, prevent metastases and kill existing cancer cells in a variety of different cancers.

Cardiovascular problems are part and parcel of an unhealthy way of eating. Cholesterol causes atheroscleropic plaque build-up within the arterial walls. Should a clot break away and travel to the heart or brain, a heart attack or stroke is inevitable.

Curcumin assists the liver in clearing LDL (bad) cholesterol. With a range of epidemiological studies done in India over the past 50 years, it has become evident that turmeric plays a part in protection against neurodegenerative diseases such as Alzheimer’s Disease and multiple sclerosis. It is not yet clear how, but it is a fact that amongst the elderly in India, where turmeric is used daily, the occurrence of these neurological diseases are low. Laboratory tests on mice suggest that curcumin may block the progression of these degenerative diseases. In another study on rats, turmeric was found to increase certain liver detoxifying enzymes, enabling the liver to get rid of toxic chemical in a much more efficient way.

Turmeric used directly on the skin is very nourishing. The appearance of stretch marks and pigmentation could be reduced. It has strong antibacterial and disinfectant properties and is excellent for use on cuts and burns, but also on skin conditions such as psoriases and acne. Turmeric could be mixed into any body lotion or if used on the face, into yogurt. But it can stain the skin so it’s not recommended for caucasians to put turmeric directly on the skin. Read more about turmeric uses here.

Turmeric boosts the immune system but should you happen to pick up a chesty cold or flu, it acts as an expectorant by increasing bronchial secretion, making it easier to cough up phlegm, opening up the air passages. Getting rid of intestinal worms, as an antidepressant…

As you can see, turmeric offers many amazing benefits and should be implemented in everyone’s diet. It is one of the most healing herbs and widely used in Ayurveda and Chinese Medicine.To top it all, it’s inexpensive, easy to get hold of and safe, even in large doses. To add a bit of sunshine to your life, try this Balinese Turmeric Juice recipe.

1. Bring a big pot of water to the boil, peel the turmeric, add it to the water and let it boil for 20 minutes until it is soft and the water becomes a bright marigold yellow.

2. In the meantime, fill a pan with about an inch of water and get it on the stove. Crack and open the tamarind, add only the inner fruit to the pan and move it around to melt and dissolve into a jam like texture, adding a bit of water should it look dry. When it is soft and the little seeds start coming out, turn off the heat and let it cool.

3. The turmeric water should be done by now. Add a bit of cold water to cool it, then pour it, turmeric and all, into your blender until it becomes a smooth, rich liquid.

4. Strain the tamarind to get rid of all seeds and peels, then add the clear bit that has been caught in the bowl to the turmeric, blending it all together.

5. Squeeze the lemons into the blender, add honey to taste and after another quick swish in the blender and pour into jars. Store in a fridge (will last up to 4 days), shake before drink and enjoy!