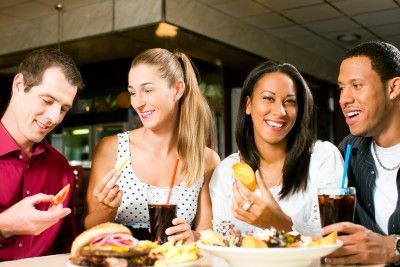 As we race through our busy days and barely take time to eat, let alone enjoy a meal, more is at stake than simply depriving our taste buds. Vitality is seriously compromised, too. When we don’t take pleasure in our food, regardless of how nutritionally superior it may be, our mental and physical well-being plummet. Scientific research agrees: If we consume tasteless fare, health suffers.

Pleasure as the ultimate health kick

Seeking a way to lower cholesterol, absorb more nutrients or slim down? Research has found the simple element of pleasure may be the key. According to Marc David, founder of the Institute for the Psychology of Eating, “When you’re turned on by food, you turn on metabolism.” He references three studies involving pleasure and health.

The first was a University of Texas study where participants suffering from high cholesterol were given a general low-fat diet – with one exception – each was allowed to splurge every other day with a ham and cheese sandwich along with a milkshake. We would expect cholesterol levels to sky-rocket, but they didn’t. In fact, there wasn’t an elevation at all. David attributes this surprising finding to, “Relaxed and celebrated moments in an otherwise bland and stressful diet. And that decrease in fight-or-flight chemistry could have been, by itself, enough to lower cholesterol.”

Another study involved subjects from Sweden and Thailand. Each group was given a traditional Thai meal. The women from Thailand enjoyed the meal but the Swedes did not. The researchers discovered that, even though each meal had the exact same amount of iron, the Thai absorbed twice as much as their Nordic counterparts. When the tables were turned and the women were given a classic Swedish meal, iron absorption was highest in the Swedes, who took pleasure in the food.

The final study explored the ramifications of an impaired taste mechanism. One group of rats was able to taste the flavor of their meals whereas another group could not. Each group was given the same amount of food and identical meals. Shockingly, every animal who could not taste, died. When the scientists autopsied the animals, they realized the rats had perished due to clinical malnutrition – even though they had consumed the same amount of food as the others. Essentially, their organs had wasted away in starvation.

David continues with an exploration of two biochemicals that influence weight. The first is neuropeptide Y, which triggers an instinctive sense to search for food. It’s naturally elevated in the morning as well as when we diet and/or restrict food. David observes:

“So if you deny yourself the pleasure of food through low-calorie eating or if you restrict yourself to a fun-free diet, the body responds by chemically demanding pleasure and satisfaction. The lesson that neuropeptide Y teaches us is we cannot escape the biological imperative to party and enjoy. No matter how stingy we are with eating, the body will not be denied.”

Next are feel-good endorphins. When we savor pleasurable food, these substances are released in substantial quantities within the brain and gut. Endorphins not only make us happy, they also rouse fat mobilization while increasing blood and oxygen in the digestive tract. This equates to improved assimilation, digestion and calorie burning.

All in all, this isn’t an excuse to indulge in vast quantities of unhealthy food at a record pace. It’s about slowing down and really savoring meals that give us pleasure – which automatically leads to appropriate portions and an intuitive sense of what the body truly needs.

Sources for this article include:

Carolanne enthusiastically believes if we want to see change in the world, we need to be the change. As a nutritionist, natural foods chef, and wellness coach, Carolanne has encouraged others to embrace a healthy lifestyle of organic living, gratefulness, and joyful orientation for more than 13 years. Through her website  www.thrive-living.net she looks forward to connecting with other like-minded people from around the world who share a similar vision.