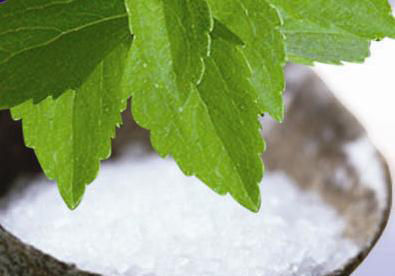 It may seem at first boring and mundane, but there’s good reason to become familiar with the history of the now famous shrub. While modern science is in a tizzy to nail down and agree upon health benefits of stevia, its history has much to expound.

The stevia plant is part of the large sunflower family and native to subtropical parts of South and Central America, Mexico, and the US states Arizona, New Mexico and Texas. The Guarani people were historically nomadic and are now known to Paraguay, parts of Argentina, Brazil, Uruguay and Bolivia. The Guarani are said to have used the “candy leaf” for more than 1500 years. In their native tongue it’s called ka’a he’ê, which means sweet herb.

This nation of people has used the herb for sweetening mate, a common tea drink, as well as a refreshing treat just chewing the leaf. But they’ve also known it to be medicinal, and to this day herbal medicine in Paraguay and Brazil uses stevia to treat illness and promote health.

Notably, Japan has also been using the plant leaf and one of its extracts, stevioside, for many decades. In fact, after years of rigorous testing to ensure the plant’s safety, stevia now dominates 40% of all table and food additive sweeteners in the Land of the Rising Sun.

Additionally, many outside of the US have long since found that stevia can help to protect the gums and teeth, making it suitable for use in toothpastes and mouthwashes.

In the US, however, there has been controversy. Despite the plant’s 1500+ year track record of approval, the FDA banned its import in 1991 calling the sweet leaf an unsafe food additive. There was and is a common assertion that the FDA’s original rejection was not in the interest of public health, but Monsanto’s booming line of artificial sweeteners. Whatever the case, the ban was greatly contested and by 1994, lifted. From there, sellers had to position and market stevia as a nutritional supplement, marginalizing the product to health-buffs and possibly preventing a mass exodus of calorie-counting buyers from the synthetic to the leaf.

Fifteen years later the FDA gave the nod, not to the use of the whole plant but to extraction of so-named “active constituents.” Today, the whole stevia plant is still considered a supplement and cannot be used as a food additive. But as of 2009, instead of the whole leaf, the FDA has approved the use of “stevia-based” sweeteners.

This makes the products patentable. A plant cannot be patented and owned; but a process of extraction and the resulting product can be, and this makes for much better profits to the manufacturer. Thus, CocaCola and PepsiCo grabbed their corner of the sugarless market via their products Truvia and PureVia, respectively.

According to a report from the Pakistan Agricultural Research Council:

In addition to being a sweetener, stevia is considered (in Brazilian herbal medicine) to be hypoglycemic, hypotensive, diuretic, cardiotonic and tonic. The leaf is used for diabetes, obesity, cavities, hypertension, fatigue, depression, sweet cravings, and infections. The leaf is employed in traditional medical systems in Paraguay and Brazil.

The maker of Body Ecology’s Liquid Stevia Extract shared on his website that stevia’s use extends to softening skin, smoothing wrinkles and even healing blemishes and wounds. Perhaps most researched to-date is the sweet leaf’s effects on blood sugar, and its potential in preventing, or healing, diabetes.

Numerous animal and human studies from around the world have demonstrated that stevia is safe. One of the hottest questions in the scientific community now is whether or not the leaf also has the power to keep blood sugar levels under control.

In a 2011 animal study, researchers fed diabetes-induced rats stevia for 10 days and compared the results to a placebo group. The blood glucose level of the stevia group showed “delayed but significant decrease,” yet, unlike the conventional drugs, it did not cause hypoglycemia. This is GOOD. In addition, whereas the drug has been known to cause unwanted weight loss, the stevia resulted in “lesser loss in the body weight as compared with standard positive control drug glibenclamide.”

The herb has been shown to nourish the pancreas and encourage more insulin production, perhaps lending to the increase of insulin and insulin sensitivity. But these results are still inconclusive. Concerning its efficacy in improving the type 2 diabetic condition, there have been mixed results. Some have found that people with type 2 diabetes experience significantly lowered blood sugar after consuming stevia; whereas others have shown little to no difference. Nevertheless, people in Brazil and Paraguay have been using the herb to prevent and treat the condition. No doubt, further clinical and epidemiological studies need to be done.

Importantly for type 2 diabetics and others looking to swat out sugar, the natural sweet leaf has a glycemic load of 0, which means it does not raise blood sugar or cause an insulin spike.

Research over the years has also shown that stevia may help to lower high blood pressure. Some skincare products have incorporated the ingredient as a skin tightener and to improve complexion. Since the first millennium stevia has been applied to wounds for its antibacterial cleansing powers and to assist in healing. Some have even claimed results applying it to flare-ups of eczema, psoriasis and dermatitis. If you have one of these on your scalp, for instance, proponents say try adding a little whole leaf stevia extract to your shampoo. It may burn a wee bit at first, but the discomfort should quickly subside and you may see an overall reduction in inflammation, redness, itching and flaking. If you try it, or already have, let us know!

Potential Counterfeits & What to Buy

It’s likely that stevia’s health benefits are real but mild and varied, but there is no scientific argument against its benefits as a sugar replacement, nor its safety as a food additive. Yet, the FDA has done a strange thing:

Rebaudioside A, or “rebiana,” is the sweet constituent of Truvia and PureVia. These two are examples of products that aren’t pure stevia, but “stevia-based.”

To make them, rebiana is pulled out from stevia’s synergistic body of plant chemicals and used solely for its strength as a sweetener. We’ve thoroughly researched and observed the safety of the whole leaf, but how do we know that rebaudioside A is, by itself, completely safe over the long haul?

It could be, but as of yet we don’t have enough experience or long-term studies to be sure. Without the remaining agents of the plant our bodies are likely to respond differently. Even if nature fully provided all we need to properly digest and make use of the plant, by throwing out everything but the sweet we could find ourselves snagged in a health risk, yet again.

So, my recommendation is to stick to the whole leaf at least until we know more. Whole leaf stevia can have a strong aftertaste, but this is largely a result of the method of processing. Try out different brands till you find the one you like best.

Stevia can be enjoyed in beverages, salad dressings, cooking, baking and more.

An evidence-based systematic review of stevia by the Natural Standard Research Collaboration.

Body Ecology: A Brief But Interesting Early History of Stevia

Stevia: The Holy Grail of Sweeteners

Stevia: A Healthy Sweetener for Diabetics?