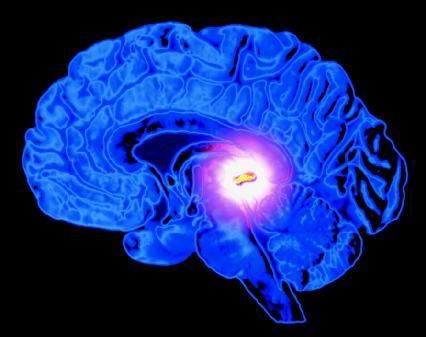 The Pineal gland is a small endocrine gland present in the brain of vertebrate animals. In humans, it’s found near the center of the brain, tucked away in a groove, where the two halves of the Thalamus come together. It gets its name from its pine cone like shape.

The pineal gland produces the hormones serotonin and melatonin. Serotonin and melatonin work together to regulate the sleep cycles known as circadian rhythm. As an endocrine gland, it also works to regulate other hormones in the body, and triggers the onset of puberty. The pineal gland is different than the rest of the brain because it isn’t closed off or protected by the blood-brain barrier system.

A lot remains to be discovered about the full range of functions of the pineal gland, but for centuries, many people have viewed it as a sort of bridge between the physical and the spiritual world. There are many metaphysical properties said to be associated this part of the brain. The pineal gland is often linked to the “third eye”.

Some researchers believe that the Pineal gland may be responsible for near death and other mystical experiences. Dimethyltryptamine (DMT) is a naturally occurring hormone very similar in form to both melatonin and serotonin. Some researchers speculate that stored DMT is released by the pineal gland shortly before physical death occurs, causing the out-of-body sensations and visions reported by those who survived near death experiences. There is no concrete evidence that proves the pineal gland produces DMT, but it is thought to be likely, since it produces the melatonin that is a primary component of DMT.

New research is also showing that melatonin is important for far more than just proper sleep patterns. Some studies suggest that melatonin has an anti-inflammatory effect and may play an important role in protecting the nervous system against degenerative diseases like Alzheimer’s. Melatonin has also been shown to have anti-oxidant properties that may protect against cancer.

For more details regarding the power and function of the pineal gland, read The Power of Your Pineal Gland.

Unfortunately, there are many things you may be exposed to daily that inhibit the proper function of the pineal gland, thereby reducing proper levels of melatonin. Electromagnetic radiation was shown in both human and animal studies to reduce the pineal glands ability to generate melatonin during nighttime sleep cycles. The studies were conducted using 60Hz electrical fields, which are common in most homes.

Fluoride is another concern. In many communities fluoride is used as an additive in drinking water to protect teeth from decay, however overdoses have been shown to have damaging health consequences, including bone and tissue damage. Studies have also linked overexposure to fluoride to calcification of the pineal gland. Because fluoride is prevalent in so many products, including toothpastes and mouthwashes, many people are opting to filter their water to prevent overexposure.

For more details regarding the dangers of fluoride, read Dangers of Fluoride and How to Decalcify Your Pineal Gland.

Fortunately, there are several foods and supplements that can help reduce calcification of the Pineal gland and reverse damage.

Apple Cider Vinegar can be used as both a food or supplement. It should be raw and organic for the best benefits. Cider vinegar is a rich source of malic acid, a compound that supports the digestive system, detoxes the body and has the added benefit of lowering blood pressure.

Extra virgin coconut oil is one of the most versatile oils and is great raw or cooked. Its high smoke point makes it ideal for sauteing vegetables and it adds richness and moisture to baked goods. It contains essential fatty acids vital for brain function and health.

Oregano Oil taken in capsule form acts as a natural antimicrobial and antibiotic, protecting the body from many diseases. It also helps break down calcium shells from bacteria in the Pineal gland.

Foods that work to reduce acidity and promote a healthy pH balance in the body are called alkaline foods. There are many foods on the list, including most fresh vegetables and many fruits. Eat organic when possible to avoid exposure to harmful pesticide residues.

In addition to a healthy diet and reduced exposure to toxins; there are other practices that may help strengthen the Pineal gland. Many traditions believe that a healthy pineal gland enhances spiritual awareness and higher levels of understanding. When the pineal gland is healthy, we are better able to access elevated states of consciousness. Regular spiritual practice like meditation or yoga may also work in reverse, helping to stimulate and protect the pineal gland.