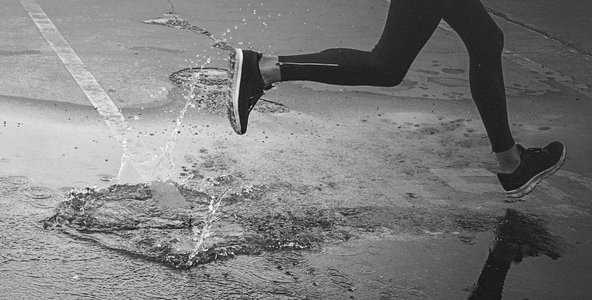 A new research, focusing on runners who had never been injured, examines the whys and hows of running injuries. This post from WELL sheds light on why we get running injuries and how to prevent them.

Warm weather is on its way across the country — really, it is, I promise— and so are spring marathons, meaning that many people soon will begin a new or augmented running program. Many also will wind up sidelined by injury. But a new study suggests that being light on your feet could keep most runners healthy.

Running injuries are extremely common, with some statistics estimating that as many as 90 percent of runners miss training time every year due to injury.

But the underlying cause of many of these injuries remains in question. Past studies and popular opinion have blamed increased mileage, excess body weight, over-striding, modern running shoes, going barefoot, weak hips, diet, and rough pavement or trails. But most often, studies have found that the best indicator of a future injury is a past one, which, frankly, is not a helpful conclusion for runners hoping not to get hurt.

So for the new study, which was published in December in the British Journal of Sports Medicine, researchers at Harvard Medical School and other universities decided to look at running injuries, one of the more obvious but surprisingly understudied aspects of running, and to focus their attention, in part, on those rare long-time runners who have never been hurt.

Specifically, they set out to look at pounding, or impact loading, which means the amount of force that we create when we strike the ground. Pounding is, of course, inevitable during a run. But runners with similar body types and running styles can experience wildly different amounts of impact loading, and it hasn’t been clear to what extent these differences directly contribute to injuries.

The researchers recruited 249 experienced female recreational runners, who were chosen in part because they all struck the ground with their heels when they ran. Most runners are heel strikers, and heel striking is believed by many running experts to cause higher impacts than landing near the middle or front of the foot, possibly contributing to an increased risk of injuries. (The scientists focused on a single sex so that they would not have to control for gender in the results.)

The volunteers reported to a biomechanics lab, where they completed questionnaires about their injury history and then strode along a track equipped with force monitors to determine their impact loads.

Afterward, the scientists asked each volunteer to complete an ongoing, online running diary and injury log.

The researchers tracked the runners for two years.

During that time, more than 100 of the runners reported sustaining an injury that was serious enough to require medical attention. Another 40 or so reported minor injuries, while the rest remained uninjured.

More remarkably, in the minds of the researchers, 21 of the runners not only did not become injured during the two-year study but also had not had a prior injury. They remained long-term running-injury virgins, the athletic equivalent of unicorns.

Intrigued, the scientists decided to compare that small group’s impact loading with the pounding experienced by the seriously injured runners, since, the researchers theorized, the contrast between these groups should provide the most telling data about whether how hard you land affects your risk of being hurt.

The answer was that it does. The never-injured runners, as a group, landed far more lightly than those who had been seriously hurt, the scientists found, even when the researchers controlled for running mileage, body weight and other variables.

That finding refutes the widely held belief that a runner cannot land lightly on her heels.

“One of the runners we studied, a woman who has run multiple marathons and never been hurt, had some of the lowest rates of loading that we’ve ever seen,” said Irene Davis, a Harvard professor who led the study. She pounded far less than many runners who land near the front of their feet, Dr. Davis said. “When you watched her run, it was like seeing an insect running across water. It was beautiful.”

The data also, however, contain a more general message for those of us who are not as wispy and whippy in our landings. Consciously think about “a soft landing,” Dr. Davis said. Some runners, especially those with a long history of injuries, might want to experiment with landing closer to the midfoot, she said, since many — but not all — runners naturally land more lightly when they don’t lead with the heel.

Consider, too, slightly increasing your cadence, she said, which is the number of steps you take per minute, a change that also tends to reduce the pounding from each stride. Or you might, as I plan to do, imagine that you are running over eggshells or, even more evocatively, are a water strider, moving gracefully and weightlessly across the pond.

via Why We Get Running Injuries (and How to Prevent Them)