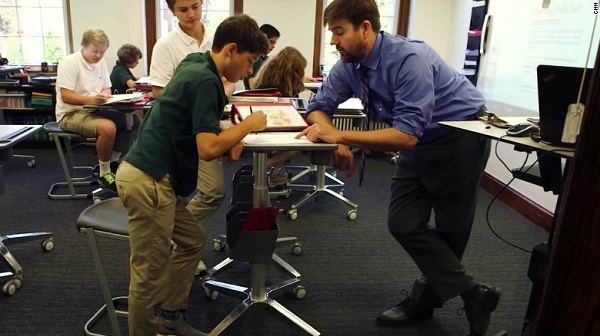 Juliet Starrett and her husband were running the sack race at their children’s school field day when they noticed something was wrong — the kids couldn’t get into the sacks.

“A lot of kids at our school literally lacked the hip range motion to get into the sack and then were having difficulty jumping,” said Starrett, who lives in San Rafael, California and has two daughters, ages 7 and 10.

The couple’s company educates corporations, athletes and professional teams on movement, mobility, mechanics and injury prevention, and that day at the sack race “really freaked us out because we realized the only thing that could cause that kind of dysfunction in kids was sitting too much.”

They’d been recommending people minimize sitting and use standing desks for about seven years. The desks are no longer an anomaly in workplaces, especially after studies showed prolonged periods of sitting can be horrible for our health. But the sack race was the first time they’d considered using the desks in schools.

Last August, Starrett and her husband worked to get 25 standing desks in their daughter’s fourth-grade classroom in her public elementary school. After they raise $150,000, all 450 students in the school, even kindergartners, will be standing by January, Starrett said.

“We weren’t really sure if the parents would conclude that we were torturing their children or if the teachers would be interested and engaged, so we really didn’t know what to expect … and it was a success times 1 million,” said Starrett, who founded a nonprofit called Stand Up Kids, with the goal of getting standing desks in every public classroom across the country. “Educators are really seeking alternatives to the current environment and with all the technology and the amount of time that kids are sitting, teachers often bear the brunt of that in terms of behavior issues (and) attention problems in school.”

Schools moving away from ‘sitting all the time’

While the concept of standing desks is still a new one in education, there are examples across the country of schools moving away from the traditional “sitting all the time” approach to a standing and moving environment.

Alexandria Country Day School in Alexandria, Virginia, appears to be one of the first schools in the United States to provide adjustable standing desks in every middle school classroom. Students can use the desks to stand, sit or even kneel. The school’s head, Scott Baytosh, has been using a standing desk himself for six years, so when the school received a $3 million anonymous donation and was able to renovate every classroom, he wanted to consider other options for his students.

“Kids at this age need to move and so often in education, we tell them to stop moving, sit still, sit up, pay attention. Here we are, allowing them just enough movement to be more comfortable and focus so that they can focus their mental energy on what the lesson is asking them, not thinking, ‘I’m really uncomfortable. I wish I could move right now,’ ” he said during an interview at his school.

In West Caldwell, New Jersey, two years ago, teachers Jennifer Emmolo and Jaclyn Ginex wrote a grant to get standing desks at their public school, Wilson Elementary School. They were looking to find a way to deal with disruptive behaviors such as students going to the bathroom when they didn’t really need to go or banging their pencils and disturbing a neighbor, and at the same time, give students an outlet for their energy that was not disruptive to anyone else in the class, said Emmolo.

The results have been stunning, said Emmolo, who works with teachers to help them integrate technology into the classroom.

“Things like talking when you weren’t supposed to be talking, fidgeting with some kind of object on your desk, standing around the room and moving at not great times, all of those undesirable behaviors decreased by incredible amounts,” she said. “It was pretty amazing. Kids that you might have to talk to sometimes on more than an hourly basis to refocus them or redirect them, you no longer had to do that,” she said.

One of the most popular features of some standing desks, including the ones at Wilson Elementary, are so-called fidget bars on the bottom of the desks, which, as the name implies, give the kids a chance to fidget or swing the bar without affecting anyone around them.

“I kind of get my energy out with the fidget bar,” said Enzo, a third grader at Wilson Elementary School.

“We love that students can swing their feet back and forth … and be in perpetual motion and can do that without bothering anyone else,” said Emmolo.

Today, the school has more than 30 desks with fidget bars, which students can use to stand or sit, said principal Scott Keena. His teachers would love more, he said.

“The teachers are now coming to me and almost saying they’ll do anything for more of these,” said Keena. “I’d almost argue it’s as exciting for the staff as it is for the students because they’re hearing from their colleagues about all the benefits their colleagues next door are having and they want the same.”

There hasn’t been a ton of research on the effectiveness of standing desks on children, but early studies are promising, experts said.

In a study of nearly 300 children in second through fourth grade over the course of a school year, researchers found a 12% greater “on-task” engagement, or an extra seven minutes per hour of engaged instruction, in classrooms with standing desks. Engagement was measured by activities such as whether students were focused on their teacher when the teacher was speaking and raised their hands and participated in class discussions.

The leader of the study, Mark Benden,director of the Ergonomics Center at the Texas A&M Health Science Center, said the anecdotal response from teachers and principals was significant. Teachers called him and told him they had to create more lessons because, for the first time ever, they had gotten through all their material already, he said in an interview.

And the kids who typically had been sent to the principal’s office for misbehavior were no longer turning up there, he said.

“I mean literally, I’ve had principals tell me, ‘I went out looking for this child to see if they were still in my school because I was worried that something had happened,’ that they were gone,” said Benden, author of “Could You Stand to Lose? Weight Loss Secrets for Office Workers.” “They were just standing at the desk, happy as can be, functioning like any of the other kids.”

“Things have changed a lot, for kids, especially, and we’ve got to get them up and going and being more active,” said Benden.

Other international research also shows the benefits of standing desks. In astudy of a class of 9- to 10-year-olds in England, a bank of six standing desks was provided to students. The teacher rotated the children around each day to ensure the children were exposed to the desks for at least an hour a day.

The study found that overall classroom sitting time dropped by about 52 minutes per day, said researcher Stacy Clemes, senior lecturer of human biology at Loughborough University’s School of Sport, Exercise and Health Sciences in the United Kingdom. The results mirror those of an Australian study of 11- to 12-year-olds who had standing desks, researchers said.

“We saw similar changes between the two countries in terms of classroom sitting time, so I mean it does provide some flexibility” if schools can’t afford a lot of standing desks or fit them all in the classroom, said David Dunstan, head of the physical activity laboratory at the Baker IDI Heart and Diabetes Institute in Melbourne, Australia, and the lead researcher for the Australian study. “It’s good to have at least some so that the kids can rotate through.”

In the English study, teachers were also given questionnaires to fill out before and after the study, commenting on students’ concentration, attention to task and general behavior.

“We recently just analyzed the data and we find there was significant improvement in behavior” when the children had access to standing desks, said Clemes. “I would say that we definitely saw positive changes in behavior.”

Could standing be the new normal?

Researchers say more studies are needed to assess the long-term impact both on health and students’ academic performance from using standing desks at least some of the time during the school day.

“I think that’s what will make a more convincing case to schools, parents, etc. that this is going to lead to improved learning and a greater learning experience and … that this is the way to go,” said Dunstan.

What’s also exciting about working with children, researchers say, is that if they spend more time standing in school, they’ll fully expect to be doing the same when they begin their careers.

“You’re told traditionally, ‘Sit, be quiet and learn,’ so the sitting is kind of ingrained from a very early age,” said Clemes. “If we can get in and start changing … behaviors in children … standing will become the norm, so when these individuals then go into the workplace, they’ll hopefully expect similar furniture and will be reducing their overall sitting time, which hopefully should then have long-term benefits to health.”

Cost is certainly an issue, as standing desks are definitely not cheap. A single desk can range from $260 to $550, depending on the model, although schools often get discounts by buying in bulk.

Right now, Starrett of Stand Up Kids is trying to raise $1 million to help fund any teacher request for standing desks on Donors Choose, the website that connects teacher requests in high-need communities with donors who want to help.

Before January of last year, there were about 25 to 30 requests on the site for standing desks, said Starrett. Since January of this year, there have been nearly 300 standing desk projects funded. That’s gotten 15,000 kids standing across the country, about 75% of them in high-poverty schools, she said.

“We have just been getting emails from all over the place, including from across the globe, so something about this has sparked something to people,” she said.