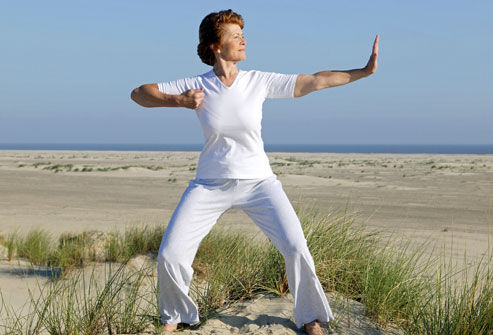 “As the quiet countryside slowly enveloped the chaos in Junbao’s life, he slowly soothes his senses and creates the new, smooth, free-flowing art of Tai Chi. In this new time, in his life, he slowly regains his mental health and total mind and body unity.”

Remembering this classic film from the 90s, Tai Chi Master (1993) carried the resounding theme of martial arts being the best way to heal the human body. In the famous Hollywood movie, Jet Li discovers a new way to release his physical tension into smooth and relaxing transitional movements. He slowly regains mental consciousness of his actions and slowly trickles into a sense of peace, right before the main antagonist strikes back and brings out the use of Tai Chi as a self-defense martial art.

Tai Chi: What Is It All About?

Tai Chi, also called Tai Chi Chuan, has been used as a form of meditation through a self-paced system of physical exercise and stretching. It is classified into two categories, “soft or internal martial arts”, and “hard martial arts”.

Students of Tai Chi recognize this as a martial art of “flowing with the earth’s spirit” as it is usually characterized as “mediation in motion” through soft, slow, and free-flowing movements. Apart from the popularity as an exercise, it is also heavily debated to be considered a self-defense technique. Recent studies show that not only does the martial art aid in relaxing the mind but it also in taking care of the body when it comes to diseases or common sicknesses.

Basically, Parkinson’s disease is a nervous system disorder which commonly develops around the age of 50. It carries certain specific symptoms such as constant blinking, lack of facial expressions, shaking, loss of balance and coordination, and other irregular bodily reactions.

It is commonly attributed to genetics or lack of bodily functions or exercise and is caused primarily by the destruction of the nerve cells in the brain which makes dopamine, a neurotransmitter responsible for the transfer of pleasure and reward feelings in the center of the brain.

In a special report to CNN, the Mayo Clinic indicated that “Parkinson’s disease is progressive meaning that its signs and symptoms become worse over time. But although Parkinson’s may eventually be disabling, the disease often progresses gradually, and most people have many years of productive living after diagnosis.”

One common treatment for this disease besides drugs is physical therapy, wherein certain exercises are conducted to aid meditation and relieve certain bodily stress brought about by the disease. Through the aid of recent research studies, this is where Tai Chi comes into the picture.

Recently, New England Journal of Medicine published certain research experiments were announced that found that Tai Chi helps relax and rebuild the mind and its functions in the human body. It has been proven that Tai Chi movement’s gentle balance enhancing motions can help the Parkinson’s patient by helping to reduce the gradual loss of balance that Parkinson’s sufferers often experience.

In the research study, a test population of 195 people with movement and balancing problems caused by Parkinson’s disease were recruited from four Oregon cities. The test subjects were separated into three groups and were scheduled to meet an hour a day, twice a week. Each group was assigned to specific activities, which would theoretically help them in overcoming their constant fight against Parkinson’s disease. Groups were separated into extensive stretching classes, while others were classified into resistance training classes.

The last group, on the other hand, were given extensive lessons in Tai Chi. Results were pretty cloudy at first, but six months of extensive research and exercise paid out as the Tai Chi group experienced significant benefits, including better posture, fewer falls, and improved walking ability. In terms of performance, the resistance training group came in at second, while stretching came in last.

Study leader, Fuzhong Li, Ph.D., said: ”These results are clinically significant because they suggest that Tai Chi may be used as an add-on to current physical therapies, to address some of the key clinical problems in Parkinson’s disease, such as postural and gait instability. Since many training features in the program are functionally oriented, the improvements in the balance and gait measures that we demonstrated highlight the potential of Tai Chi-based movements in rehabilitating patients with these types of problems and, consequently, easing cardinal symptoms of Parkinson’s disease and improving mobility, flexibility, balance, and range of motion.”

As stories and researches are still conducted on this specific topic, traditional Chinese Tai Chi masters still believe in the “magical” cure that Tai Chi brings on their student’s lives. Although researchers are skeptical on all sides of the story, they still believe that further researches and studies on the topic would develop or enhance the way Tai Chi is treated as a form of physical therapy in aid of curing Parkinson’s disease patients.