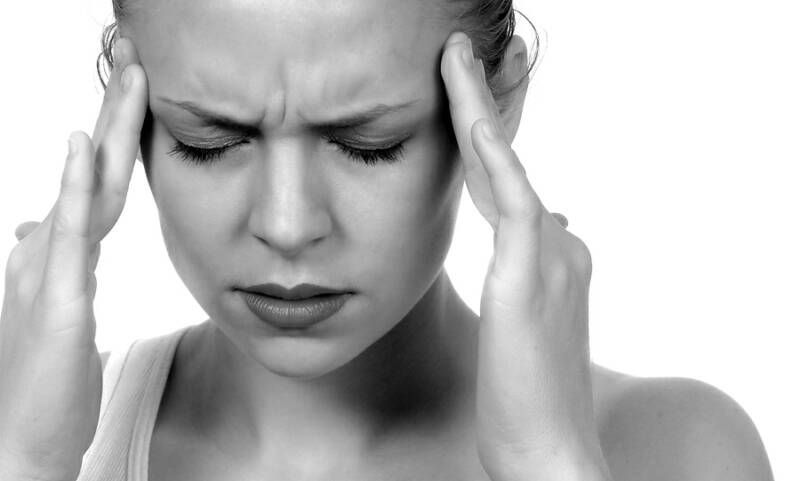 The most common type of vascular headache is migraine. Migraine headaches are usually characterized by severe pain on one or both sides of the head, an upset stomach, and at times disturbed vision.

Sensitivity to light is a standard symptom of the two most prevalent types of migraine-caused headache: classic and common. The major difference between the two types is the appearance of neurological symptoms 10 to 30 minutes before a classic migraine attack. These symptoms are called an aura. The person may see flashing lights or zigzag lines, or may temporarily lose vision. Other classic symptoms include speech difficulty, weakness of an arm or leg, tingling of the face or hands, and confusion. The pain of a classic migraine headache may be described as intense, throbbing, or pounding and is felt in the forehead, temple, ear, jaw, or around the eye. Classic migraine starts on one side of the head but may eventually spread to the other side. An attack lasts 1 to 2 pain-wracked days.

The herb feverfew (Tanacetum parthenium) has been used for centuries as a folk remedy for headache, migraine, arthritis, pain, and fever in Europe. It became especially popular in England in the 1980s as an alternative to conventional drugs for migraines.
Several studies have evaluated the effectiveness of feverfew for the prevention and treatment of migraines. For example, one study examined the use of a feverfew extract or a placebo in 170 people with migraines. There was a significant decrease in migraine frequency with feverfew, which decreased by 1.9 migraines per month, compared to the placebo, which decreased by 1.3 migraines per month.

Not all studies have shown that feverfew is effective, however. A critical review of five studies on feverfew and migraines, involving a total of 343 people, concluded that results were mixed and did not convincingly establish that feverfew was effective for preventing migraine.

Side effects of feverfew may include abdominal pain, gas, diarrhea, nausea, vomiting, and nervousness. People with allergies to chamomile, ragweed, or yarrow should not take feverfew. Feverfew may increase bleeding time, so it should not be taken by people with bleeding disorders or two to three weeks before or after surgery. The safety of feverfew in pregnant or nursing women or children has not been established.

Feverfew may interact with “blood-thinning” medications, such as aspirin and warfarin (Coumadin) and non-steroidal anti-inflammatory drugs (NSAIDs). People taking these medications should consult a healthcare practitioner before taking feverfew.

5-HTP (5-Hydroxytryptophan) is a compound produced in the body from the amino acid tryptophan. It is used in the body to make the neurotransmitter serotonin and the hormone melatonin.

5-HTP is also available in supplement form. It is made from the seeds of an African plant, called Griffonia simplicifolia. Since supplements that affect levels of serotonin are used for migraines, 5-HTP has been explored as an alternative.

Some research indicates that 5-HTP may prevent migraines and reduce the frequency and severity of migraines, however large randomized controlled trials are needed. In one study, 124 people were given 5-HTP (600 mg/day) or the drug methysergide. After six months, 5-HTP was found to be as effective as methysergide in reducing the severity and duration of migraines.

Another study looked at 5-HTP or the drug propranolol for 4 months. Both treatments resulted in a statistically significant reduction in the frequency of migraines. However, the propranolol group fared better, with a reduction in the duration of episodes and the number of analgesics used for the treatment of episodes. For more information on 5-HTP, read the 5-HTP Fact Sheet.

Magnesium is a mineral found naturally in foods such as green leafy vegetables, nuts, seeds, and whole grains and in nutritional supplements.

Magnesium is needed for more than 300 biochemical reactions. It helps regulate blood sugar levels and is needed for normal muscle and nerve function, heart rhythm, immune function, blood pressure, and for bone health.

Several studies have evaluated the effectiveness of magnesium for migraine and have had promising results. In one study, oral magnesium (600 mg per day) or a placebo were given to 81 people with migraines. After nine weeks, the frequency of migraines was reduced by 41.6 percent in the group taking magnesium, compared to 15.8 percent in the group taking the placebo. The only reported side effects were diarrhea in 18.6 percent of people and digestive irritation in 4.7 percent. Other studies have found that magnesium reduces the severity and frequency of migraine.

High doses of magnesium may cause diarrhea, nausea, loss of appetite, muscle weakness, difficulty breathing, low blood pressure, irregular heart rate, and confusion. It can interact with certain medications, such as those for osteoporosis, high blood pressure (calcium channel blockers), as well as some antibiotics, muscle relaxants, and diuretics.

The herb butterbur (Petasites hybridus) is a shrub-like plant that grows in northern Asia, Europe, and parts of North America. Extracts made from the herb have been used to treat migraines, stomach cramps, coughs, allergies, and asthma.

Side effects of butterbur may include indigestion, headache, fatigue, nausea, vomiting, diarrha, or constipation. Pregnant or nursing women, children, or people with kidney or liver disease should not take butterbur.

Butterbur is in the ragweed plant family, so people who are allergic to ragweed, marigold, daisy, or chrysanthemum should not use butterbur.

The raw herb as well as teas, extracts, and capsules made from the raw herb should not be used because they contain substances called pyrrolizidine alkaloids that can be toxic to the liver and kidneys and may cause cancer.

If migraine has occurred due to sleep disorders physical and psychic strain, or even acute anxiety, it can be treated by essential oils and Aromatherapy.

For the treatment through essential oils refer to the method below:
Use essential oil of peppermint to soak a cloth with five drops of it. Apply it on the neck area and let it remain there for about 10 minutes. If required, repeat the process after every two hours until no more pain is left.

Another efficient solution to treat migraine attacks is to use a mixture of:

Apply this mixture on frontal sinus and the temples of the head.
This treatment will ease the patient and is very efficient in removing the pain.

The only precaution in using these essential oils is not to apply them too close to eyes. And while having migraine, it is recommended to lie in a dark room.