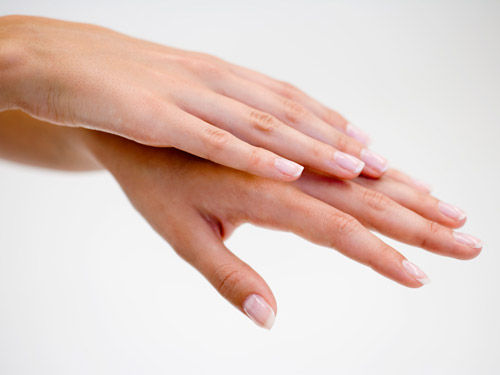 Thinking of those ugly white spots, unsightly ridges and sometimes crumbling and splitting nails, do you think that your nails could be telling you something about your state of physical health and general well-being? Almost like the eyes being the window to the soul?

Historically speaking, women who were from the high class grew their nails as this showed to the world that servants did their work and that they were proper ladies. Today it is not a case of class anymore, but a telltale sign of meticulous grooming, and a greatly featuring fashion accessory. Nail décor has almost become a subsection of the arts. The fact that nails have a true and real function has almost been forgotten.

Nails are part of the skin, which in it’s totality is a complex and vital organ. The visible part of the nail is made up of several layers of dead compacted keratin (the same substance that hooves and horns are made of). This fibrous protein turns into a tough, flexible shield, acting as protection to the fingertip and underlying soft tissue, and is an excellent tool for small scraping and scratching jobs. The thin strip of skin running along the nail bed or otherwise known as the cuticle, in it’s turn grants protection to the living keratin cells responsible for the continuous growth of the nail. Often this skin is pushed back in the name of beauty, but more harm than good is done. Bad habits like biting the nails or ripping off the bits of skin, can damage the nail bed, creating a perfect gateway and fertile breeding ground for viruses and bacteria. It is often thought that the nail is an impermeable barrier, but surprisingly, it is very sensitive to water and chemicals which can easily ruin healthy nails as can be often seen on the hands of hairdressers. While keeping all these obvious causes in mind, one should never forget that spots, ridges, discolored and splitting nails could very well be a way of one’s body urging you to do some inspection.

With emphasis on “could be”, the color of one’s nails could be (but is not necessarily) an indication of a medical problem. A healthy nail has a rosy shine to it. Another sign of a healthy nail is a smooth surface.

Signals Our Nails Are Sending

Pale or white nails could mean anemia, kidney failure, heart failure or malnourishment but normally there are far more prominent symptoms that lead the way to such a serious diagnosis.

White nails with yellow edges along the nail bed could be a symptom of a liver abnormality or hepatitis.

Blue or purple nails could be a symptom of oxygen deprivation as in the case of pneumonia, asthma or emphysema or it could simply be a sign of being cold.

A vaguely blueish tint could indicate diabetes, but once again, it could also have no cause.

Yellow nails (usually with ridges) often indicate a fungal infection but could also be the result of frequent use of acetone to remove nail polish, glue for valse nails or other harsh chemicals.

White spots are mostly caused by minor injuries on the nail bed and appear without one even knowing where and when, which will disappear with a bit of patience, as it will eventually grow out. Sometimes though, deficiencies can cause these spots. Vitamin C, zinc and calcium are common culprits, but also a protein deficiency may be responsible.

Horizontal ridges could be an early manifestation of psoriasis or arthritis, but in both cases it is usually accompanied by a red-brownish discoloration of the nail itself. It could also be a harmless temporary or permanent condition caused by trauma to the nail bed for example accidentally bringing down the hammer on the finger“nail” rather than on the head of the “nail”.

Should one’s nails break, split or crumble easily if you are not constantly exposing your hands to water or chemicals, then it could be that your thyroid gland is playing up, but there are many other more significant symptoms such as hair loss, that would probably emerge long before the nails become an issue.

Don’t forget that the shape of the nail may be of some importance. When nails turn upwards and form a spoon-like shape, which is sometimes enough to hold a few drops of water, the person has “spoon nails” or koilonychia as the condition is known in the medical world. This can be linked to a variety of diseases including heart disease and cancer, but on the other hand can be hereditary and completely innocent.

Generally speaking the nails can give some sort of indication of one’s health, but mostly deviations from what is seen as a healthy nail mean absolutely nothing. If you should happen to have any reason for concern, see your doctor, but remember that white nails doesn’t automatically mean that you have heart failure, and splitting nails is no definite for a hypoactive thyroid gland. In the meantime it is a great idea to treat your nails with respect, trim them gently, clean and moisturize them regularly and enjoy them pure and simple, pink and smooth.