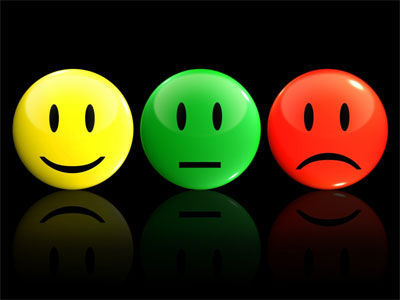 Have you ever experienced happiness as a sensation that runs through your entire body? Do you feel “empty” when you are depressed? Then you are not alone. According to a new study, most people’s emotional experiences are physically represented in the same way in the body.

A study including over 700 participants in Sweden, Finland and Taiwan has revealed some astonishing results in the way emotions are perceived in the human body. Subjects were asked to map their bodily sensations while experiencing a number of human emotions, such as love, happiness, pride, fear, shame and envy. These emotions were invoked by the exposure of certain videos, emotionally charged words, facial expressions and stories, and the subjects were asked to fill in computer-based silhouettes of a human body with color in order to illustrate their changed emotional state. Two separate silhouettes were used for one emotion; one was used for an increase in sensation using one color, and the other for a decrease using a different color. This resulted in a large amount of data that showed where in the subjects’ bodies certain emotions were represented. The silhouettes with the different colors were then compared and combined into a few images representing how the majority of the participants had described their sensations.

So what were the results? Although not all emotions would take the same shape in every person, some basic feelings would be consistent regardless of nationality, language and culture. For example, anger and fear were generally illustrated as an increase in sensation across the upper body and chest and happiness seemed to be causing an emotional upswing all over the body. Other, more discrete emotions would differ between the participants. 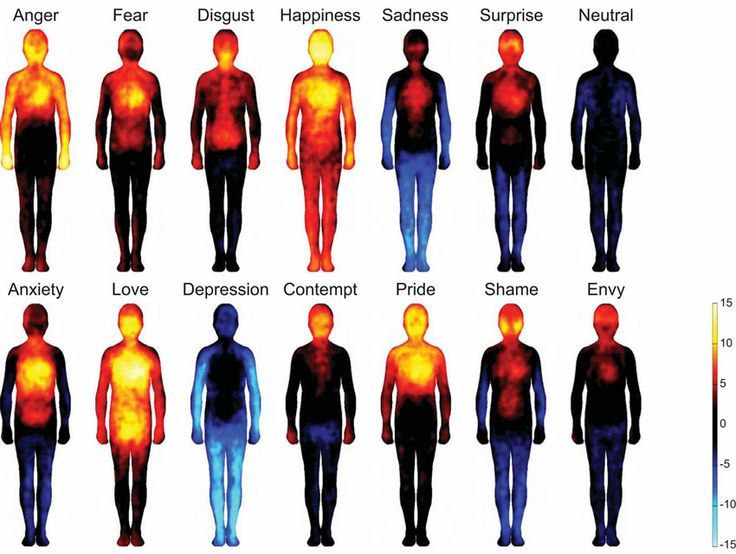 If you have ever experienced shame as a burning feeling in your eyes, you are one of many who identify the feeling in this specific way – an increase of sensation in this area was common among the participants. Holding your head up high and puffing up your chest are two traditional aspects of showing pride. Interestingly enough, the head and the chest were the two main areas where pride was commonly located. Anxiety was, according to the experiment, usually experienced in the upper body, and specifically across the middle of the chest. Love was described as an increase in sensation all over the upper body, head and arms; everywhere except across legs and feet. In fact – happiness was the only emotion that was universally physically reflected from head to toe, while all the others were concentrated to the upper body. Most emotions resulted in a sensitivity increase somewhere in the body except “neutral” and “depression”. Neutral had neither an increase nor a decrease, while depression showed a decrease of sensation in the arms and legs while the torso stayed neutral.

The purpose of the study was to promote scientists’ understanding of how the human being processes her emotions. The results can be summarized as some emotions being physically experienced in the same way in different people – a conclusion which scientists are hoping to prove further by more extensive research. Being able to physically map a mental state of mind could lead to better treatment options for patients suffering from psychological disorders.

Moreover, an increased understanding of how emotions are processed in our body can lead to a better mental consciousness of the public. Being able to identify a certain emotion and allowing yourself to acknowledge it in a proper way can help you gain a better control of your emotional life.  Emotions are an important part of life and even negative emotions are needed in order for the positive ones to exist. While negative emotions can obviously be exhausting and destructive, it is important not to suppress them. Every problem tends to have a solution, and listening to your body and understanding what is happening and why can make it easier for you to constructively deal with your issues.

In conclusion, the mapping of emotions in humans can lead to several positive outcomes. Not only can it help you as a person to improve your emotional life, but the science of psychology and mental health in general may be able to advance further.