We all want beauty—both inside and out. But instead of beauty and health, most people have major diseases like high blood pressure, diabetes, cancer and obesity plus many minor ailments like pain, fatigue, depression and eczema. Americans spent $34 billion in 2009 on alternative and complementary therapies to treat or prevent illness. Of that huge figure, $14.8 billion was spent on supplements other than vitamins.1 So each of us is spending hundreds of dollars a year on herbs, antioxidants and other supplements, but most of us are still really sick! That’s because people are desperate to be healthy and are willing to try anything, but they are being sold useless “remedies” rather than being told the truth about what works and what doesn’t.

One of the shocking truths is that we can all look and feel great by getting adequate amounts of minerals, like calcium. I know you are probably saying: “How can calcium help?  That’s for bones and teeth!” But that’s simply what we have been told; calcium actually does so much more. But before we get to how minerals can help with lots more than just strong bones and teeth, let me give you a brief introduction about just what minerals are.

Minerals cover the Earth. They are the elements like calcium, magnesium and potassium that are common in rocks. Since rocks are what make up the land, there is an abundance of dissolved minerals from rocks in most water supplies and soils. So for thousands of years, humans have always gotten an abundant supply of minerals from their diets and drinking water. However, our modern lifestyles have changed all that. For example, with the recent change toward mostly drinking filtered water, people no longer get lots of minerals from drinking water. It has been estimated in areas with highly mineralized water that 20-40% of a person’s daily requirement of magnesium can be obtained from their drinking water.2

Most people mistakenly think that we should get enough minerals from our diets. After all, don’t fruits, vegetables and dairy have high levels of minerals? Well, yes and no. You see, soils have become extremely depleted of most nutrients in the last few decades, and minerals are the main ones that have depleted. So most fruits and vegetables only have tiny amounts of minerals 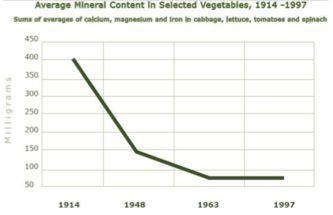 compared to what they used to have in the past (see the graph on the right from The Nutrition Security Institute).3 Plus, most people do not eat a lot of fruits and vegetables anyway! And those we do eat are picked well before they are ripe to prevent them from spoiling on our supermarket shelves, which depletes their nutrient content even more. And yes, milk, plus cheese and yogurt to a lesser extent, do contain calcium but that’s not nearly enough for the body’s needs. Add in the fact that most people nowadays eat mainly processed foods that lack nutrients like minerals. So it is obvious that we are all in need of minerals.

We’ve taken away the major sources of our minerals and expect our bodies to remain healthy. To show you the truth in this, let me tell you about the November 25, 2008 episode of Oprah on the “Blue Zones”. Blue Zones are regions in the world where people live much longer and healthier. One Blue Zone is in Costa Rica. Their longevity and health can be partly attributed to the fact that their water is loaded with dissolved calcium and other minerals.

You must be thinking that if many problems are caused by too few minerals, then taking more into our bodies should fix everything. Unfortunately things are much more complicated than that. For one, our bodies aren’t that efficient at absorbing the minerals needed to maintain the health of the body. Enzyme deficiencies, heavy metals, unfriendly bacteria proliferation, friendly bacteria deficiencies, layers of waste and yeast infections heavily affect the body’s ability to absorb minerals. Secondly, while minerals are good for preventing major diseases like cancer and stroke,4,5 the wrong kind can actually cause heart attacks and stroke.6 But more on this later.

Next, let’s next see what minerals are and what they do in the body. One by one, we will look at the macrominerals, the ones that we need lots of daily: calcium, magnesium, potassium, phosphorus and sodium. Then, it’s on to the microminerals, the ones we only need tiny amounts of daily: iron, chromium, copper, iodine, manganese, selenium, zinc and molybdenum. Prepare to be shocked, especially by what you will learn about calcium.

If you have any questions or comments please submit them below…