“Yes, hypnosis works. But is it real?” This question has plagued hypnotists ever since the first pocket watch was swung in the early 1800’s. But now, because of three amazing studies that have been conducted in recent years, that question may be laid to rest.

Because hypnosis had its birth during Victorian times, right along with Mesmerism, Spiritualism, and other “isms” that lent themselves to mysterious seances in the parlors of high-society ladies, it has since suffered from a lack of credulity not only among the general populace, but in scientific circles as well.

Now, that’s changing. And it’s all because of an imaginary color, and the discovery that 75% of humans have “the perfect brain” for hypnosis.

Read on to discover why science is finally saying hypnosis is real after all…and how you can use it today (think WAY beyond weight-loss. We’re talking everything from astral projection to manifestation).

Exhibit A: The Color That Wasn’t

Think you know which color is which in the picture below? Blue square on the left, red square on the right…right? Well, think again. 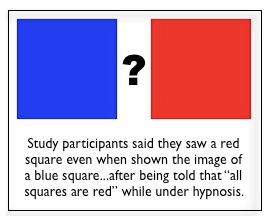 In a recent study reported by eScienceNews, researchers from Finland discovered that people could be hypnotized to think that the blue square was actually red, when it was right in front of their eyes!

Each of the participants were given a suggestion under hypnosis such as, “squares are always red.” Then they were shown colored shapes on a screen in quick succession.

Amazingly, when a blue square appeared on the screen, they experienced the color as being red (they said it was red, as well as showing correlating brain activity). The study said that this showed “the effect [of the hypnosis] was strong enough to override the real color of the square.”

So, under hypnosis, they basically could imagine that a blue square was really red, and believe it to be true enough, that the color transformed into their belief right before their eyes.

Now sure, that may not seem like a “useful” phenomenon, interesting as it is as a novelty. How does it make any difference to us outside of a research lab, though?

Well, let’s say that you wanted to lose weight.

First, you need to convince yourself that the “reality” looking back at you in the mirror is merely a temporary illusion, and that you can, and indeed will, become the svelte image you have in the back of your mind. You need to BELIEVE this new image is real, with your whole being. Yet, that small voice in the back of your head keeps saying, “you’ll never do it. The thin you is not real, and can never be real.”

How to silence that cynical, negative voice long enough to make the reality you want to believe in, come true? You (or a trained hypnostist) can use a hypnotic technique called “the dial” to make the image of the “thin you” so real, that it actually becomes more real for you than your current reality…until one day, it’s no longer a belief. It’s the real you.

Ok, so maybe hypnosis is real. But does it work for everyone? Not quite. It works for about 75% of the population, and not so well for the other 25%. (If you’re wondering which you would be, keep reading).

So why does hypnosis work for some brains but not others?

Actually, that question brings us to our second example: a study published in the Archives Of General Psychiatry that used brain scans to show why 75% of humans have the “perfect brain” for hypnosis…and 25% don’t.

Exhibit B: The Search For The “Perfect Brain”

Turns out, some people have the “perfect brain” setup for hypnosis, and some people don’t. But why? 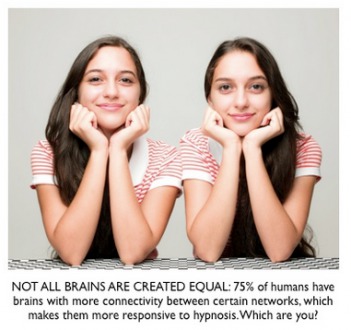 Hypnotists have been using a series of “non-scientific” tests for years to discover ahead of time whether someone will be easy or difficult to hypnotize (you can tell partly from the way someone moves their eyes).

But only recently has a scientific study actually used monitored brain activity to show why this may be.

The 3 functional brain networks the researchers were comparing activity between were:

The conclusion was that those with greater activity between those areas, essentially had “the perfect brain” for using hypnosis.

So, what if you happen to be in that magic 75%? What might you use hypnosis for?

But these days, that’s just the tip of the iceberg. Today, hypnosis is being used by everyone from entrepreneurs to minimalists, dream-therapists to bio-hackers, to push the envelope in far-reaching areas of self-actualization, including:

In fact, wealth hypnosis is actually one of the fastest growing applications for hypnosis today. And, as a long distance runner in college, I used some amazing techniques combining astral projection and self-hypnosis to improve my athletic performance.

And then there’s the REAL cutting edge.

But let’s bring this back to you, and the here and now…

Wondering what you can use hypnosis for in your life…and whether you have one of those “perfect brains” or not?

There’s an easy way to find out. Try a free hypnosis session…online. Hypnosis is more easy to access than ever today, thanks to the internet, which has removed a lot of barriers that once held people back from trying it out for themselves.

How does online hypnosis work as opposed to “live” hypnosis in a clinic?

Interestingly, it actually seems to work as well if not better than traditional settings. In fact, what I’ve seen is that even people who might be hesitant to go to a clinic, have been trying hypnosis online. It’s so easy to just sit down and watch a video on your own schedule, in your own setting. I think online hypnosis removes some of the barriers that have been there for people in the past.

If you’d like to try out a free hypnosis session for yourself (without leaving home) just click here to schedule your free session.

Who knows? If you’ve got the “perfect brain” there’s no limit to what you can believe, and what you can believe, you can achieve. Want to make your “dream life” a reality? First, you need to believe it’s real. Even if the square looks blue to the rest of us 🙂
LIKE this article? SHARE it before you go!

Tellman Knudson, CHT is a certified hypnotherapist, barefoot runner and entrepreneur. He helps people become wealthier, healthier, happier versions of themselves with his new program The Wealth Method.