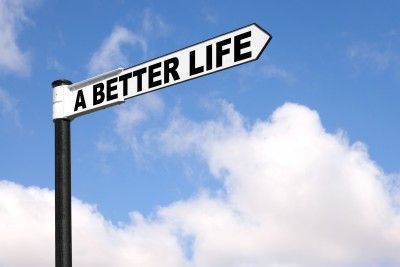 Almost 800 years ago, a Sufi mystic and poet lived and penned the wisdom of his age. In the Muslim world he’s known as Jalāl ad-Dīn Muhammad Rūmī, but in the English speaking world he’s known simply as “Rumi.”

As with all people whose words have had the heaviest influence on social consciousness, Rumi’s wisdom crosses the lines of culture, religion and time. You don’t have to care that he was Persian, Muslim, from the 13th century or a mystic. His words and poetry resonate so strongly with universal ‘truths’ that he’s become one of the most famous poets in America.

All 13 life-altering, paradigm-shifting quotes are Rumi’s. Even if you’re highly familiar with Rumi’s writings, while you read them pretend God is talking to you. Or the universe. Or, the divine part of yourself. Or whatever you listen to that taps the most intimate, connected part of who you are. The treasure of Rumi’s message has to be deeply felt and integrated. (Otherwise it’s just Quote-of-the-Day material.)

I. “Be grateful for whoever comes, because each has been sent as a guide from beyond.”

II. “If you are irritated by every rub, how will your mirror be polished?”

I’ve held some pretty arrogant, self-congratulatory beliefs in my life. (I’m probably holding a bunch right now, but life has yet to slap them out of me as it has with the ones I already know about from the past.)

One of those beliefs had to do with how awesome I was to avoid relationships that came with any sort of complication. For example, dating a man with kids was a total deal breaker for me. I wasn’t going to let anything gum up my streamlined and simple life. I reflected this back at myself as a sign that I was highly developed. But here’s where the real bullshit belief showed up – while I never would allow myself to get involved in something sticky, even if I DID I would be super awesome at managing it.

Then I fell in love with a man with two kids and a less than amicable relationship with his ex-wife. It was basically the picture of complicated, and as I watched their messy custody battle unfold I found myself becoming angry, resentful and filled with spite at people I hadn’t even met. I was doing things like wishing for them to hit rock bottom. Sickness, poverty… the formula for misery. I was so righteously indignant I had decided my behavior was altruistic, because I felt that if they just ‘got theirs’ they would ‘learn their lesson’ and become better people for it on the other side.

It was an intense but short ride. At one point Joel said, ‘Maybe they’re there to teach us something important about ourselves. To grow in a way we couldn’t otherwise.’

Joel had tapped into wisdom that been penned 750 years before. Or, in the words of Rumi, “Be grateful for whoever comes, because each has been sent as a guide from beyond.”

Suddenly, people who I had at one point casually “wished death” upon now became people I couldn’t live without. They were giving me an extraordinary gift, and I realized I was the one that was ‘getting mine’ and ‘learning my lesson’.

I’ve found a whole new level of Zen about the entire thing. Of course, I’m still on the journey and there are still moments that make me homicidal. As a person who had previously sold everything and paired her life down to two suitcases, this new level of logistical hassle that has entered my life can be overwhelming and maddening. But it’s also teaching me a whole new level of acceptance and finding happiness in something I would otherwise have considered a pain in the ass.

Rumi’s words on growth are the kind of reminder that needs to be in front of us all the time. I’ve written them on a 3×5 card and put it on my bathroom mirror. Each rub polishes. And I actually do feel kind of shiny about the whole situation.
Who occupies the space in your life of the villain? Who inspires ‘righteous indignation’ in you? And what would it take to make you see them as a ‘guide from beyond’, a way to polish you into becoming a better you?

Live Deliberately and with Boldness

III. “Don’t be satisfied with stories, how things have gone with others. Unfold your own myth.”

IV. “Let yourself be drawn by the stronger pull of that which you truly love.”

V. “Forget safety.
Live where you fear to live.
Destroy your reputation.
Be notorious.”

This is a subject near and dear to my heart. I’ve noticed that while my coaching clients come to me for a variety of stated reasons, they almost always want to know themselves better in order to know what to do with their lives. We live in a world that efficiently creates boxes and labels for us to step into and we’re told that stepping into them is how we become good citizens. There are not a lot of alternatives presented to us, and at some point we pick up that the desire to live an extraordinary life is something other, cooler people do but not you. The internal permission needed to take steps toward an extraordinary life get snuffed out, and suddenly you find yourself in one of those boxes slapped with one of those premade labels.

Rumi’s words remind us that there is an alternative. You are the hero of your own story. You can fall in love with a passion, a purpose or a mission and let yourself be pulled by it. And, most powerfully, stop living by fear. This is especially powerful in the safety-obsessed culture that permeates the developed world. Raised by helicopter parents, fed a steady diet of apocalyptic predictions to boost news entertainment ratings, and litigated into believing that any personal pain or hurt should be compensated with someone else’s money, we have become so paranoid and safety obsessed we barely leave our dead-bolted houses. And this translates into a fear of being judged by our neighbors, a deep seeded call back to the time that getting ‘kicked out of the tribe’ actually could mean death. And we’ve become so acclimated to this feeling of fear we don’t notice how shallow our breath has routinely become.

Well, forget safety. Live where you fear to live. Destroy your reputation. Be notorious.

Rumi knew that only in this way would we be able to haze to the ground our fear of our neighbor’s opinion, of life itself. If you know you were made for something bigger GO LIVE IT. As far as anyone has proof of it, we only appear to get one go-around at this thing called life. Don’t let fear of it keep you from living it to its fullest.

Unfold your own myth.

Find your talent and discover your gift

P.S. How are you going to embrace growth and live deliberately and boldly? Let me know by dropping a comment! And look for 13 Rumi Quotes that Could Change Your Life Part II.

Antonia Dodge is a co-founder of Genius Awakening, a business designed to help people leverage their own mental processes to optimize productivity, communication, job satisfaction, and most importantly – happiness. She has over 10 years in applied psychoanalytics, profiled hundreds of people, and consulted for companies such as Zappos, Zappos Insights, Hot Topic Media, Oracle and Voyage Media. She has helped developed over 20 high level trainings, products and resources and served on the leadership team to plan and orchestrate TEDxSinCity, an independently organized TED event held in Las Vegas, Nevada.