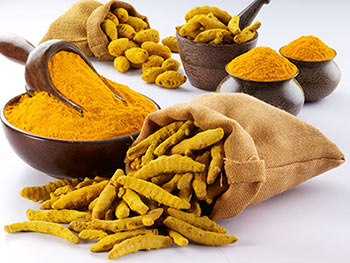 Could the well-known benefits of turmeric provide an innovative solution to the drug-based model of medicine we have today?

In my 17 years of private practice I likely have not come across a more diverse and healing medicinal root than Turmeric. Conditions such as chronic pain and inflammation, cardiovascular disease, both types of diabetes, depression, sleep disorder, stubborn weight loss, and inflammatory conditions of the skin, lungs, digestive tract, could hardly have been close to conquered without the assistance of this vital herb . Can one plant really offer such a variety of healing benefits and could such benefits provide an innovative solution to the drug-based model of medicine we have today? Let’s take a more in-depth look.

Known in the east as “Indian Gold”, Turmeric or Curcuma longa, in Latin, maintains the unique, rare and mutual distinction of being exalted in both eastern and western circles of science and medicine. This prized plant has been extensively researched for its myriad effects on the immune, cardiovascular, inflammatory, respiratory, digestive, central and peripheral nervous, endocrine, and musculoskeletal systems of the body. Turmeric’s antioxidant-rich curcuminoids even extend its impressive utility to textiles as a virtually indelible dye that gives Indian tapestries, art, and architecture their signature golden yellow hues. Authors note: Turmeric will be used interchangeably with its most studied alkyloid, Curcumin, throughout this article.

Turmeric’s history dates back at least 4000 years to India, and eventually to Eastern and Western Africa and the West Indies, (1) as an integral feature in local cuisine, clothing, and even cosmetics in these regions. Turmeric’s role in cooking and nutrition is powerful and vast, giving curry dishes their golden visual character, taste, and appeal. It is considered slightly warming in effect and its taste peppery and somewhat mustard-like (3). These attributes derive from the plant’s most potent volatile oil, tumerone, as well as zingiberene, the latter which also a dominant alkyloid in its Ginger root cousin.

Some additional noteworthy components of Turmeric would ring a bell for those who are familiar with the progressive nutraceuticals industry. One component, beta-sitosterol (4), is a plant sterol known to benefit heart disease, high cholesterol, colon cancer, asthma, prostatitis, arthritis, psoriasis and more (5). Turmeric is also a decent vegetarian source of the anti-inflammatory and cardioprotective omega-3 fatty acids (6). By weight, 100 grams of Turmeric contains 21 grams of fiber, 10 grams of fat (0% saturated), and boasts a super impressive potassium to sodium ratio of 250:1.

In the ancient healing art of Ayurveda*, turmeric displays properties beneficial to all three doshas, or constitutional types, lending to its healing diversity and application. It has been used internally in the form of fresh juice, boiled tea, tincture, and powder, or boiled together with milk and sugar, it has been valued as a popular cold remedy. Topically the juice has been used to help heal wounds, bites, stings, and bruises. As a paste combined with salt and lime, Turmeric has been applied to sprains and inflamed joints, and its vapor may be inhaled to rid the lungs of phlegm and congestion (3).

Turmeric’s impressive list of mechanisms of action can read like an anthology for lab geeks and microbiologists. For brevity we’ll bullet a few salient features here (21-23).

Through its ability to affect so many genetic, inflammatory, and immune pathways Turmeric is showing promise in addressing a multitude of acute and chronic conditions seen in healthcare today. Delayed muscle soreness after exercise (7), liver diseases such as hepatitis and cirrhosis (8), atherosclerotic heart disease (10), the prevention and treatment of many types of cancers (9, 11,), prevention of neural tube defects in utero (12), Alzheimer’s (13), progressive neurological disorders (ie. MS, Parkinson’s, ALS), depression (14, 15), breast cancer (20), and even drug-resistant urinary tract infections (16), are all showing positive responses to treatment with Turmeric.

On the Science Horizon: Nanotech and More

As if the health implications of this epically historic plant weren’t impressive enough, we find Turmeric and its most powerful component, Curcumin at the forefront of nanotechnology (17,18,19). Because of its worldwide utility in a number of individual public health settings, methods of increasing Turmeric’s bioavailablity is being extensively looked at. Because of its ability to target tumor cells and diseased tissues, and to regulate so many biochemical pathways of the body, science is working diligently to attach Turmeric, which is hydrophobic and difficult to absorb, to nanoparticle and liposomal carriers for example. The end result would be to fully unleash the healing potential of this most powerful gift from nature. In this model, could we not create an available form of Turmeric that is as powerful and effective as any synthetic chemotherapy drug on the market today – with minimal to no side effects? The possibilities would be impressive and groundbreaking, and that’s what we are looking ahead to right now.

What’s equally exciting is the research being done in linking or hybridizing Curcumin to a number of medications to both increase their bioavailability (absorption) while minimizing the dosage needed to reach optimal effect. Imagine the prospect of maximizing a chemotherapy drug’s effect at a target site with only a fraction (if any) of its typical side effects. What if we could take a COX-2 inhibiting drug, with tremendous anti-inflammatory and pain managing capabilities, without the risk for heart attack that this drug class is typically known for? Finally and perhaps most exciting, we are looking at a Turmeric-CBD hybrid that promises to unleash the incredible properties of this up-and-coming cannabinoid, using only a fraction of the typical dosing that industry standards currently practice. The implications for small children with epilepsy and the fragile and the elderly with Parkinson’s, dementia, or Alzheimer’s now become virtually limitless.

Absorption concerns notwithstanding, I have seen simple, over-the-counter Turmeric work quite well. When taken in adequate quantity (I recommend no less than 10 capsules in divided doses throughout the day) and in its strongest form, as standardized extract guaranteeing 95% curcuminoids content, I have seen it display some impressive results in my patients. I sincerely hope have you the chance to try it out in your food, added to your smoothie, or in concentrated form if a more potent effect is desired.

*In Sanskrit, Ayurveda translates as the science of life (ayur=life, veda=science). Neither treatment of symptoms nor disease is the focus of this ancient practice. Instead, the tenets of this art form fall under the purview of nature – when natural law is honored, balance is restored to the organism and the illness is at hand is resolved. Louis Pasteur, who’s work ultimately defined and ignited the ‘germ theory’ and the resultant rise of antibiotics, acknowledged on his death bed among his final few sentiments “…the pathogen is nothing; the terrain is everything.” (2) While I won’t debate the merits (or not) of pasteurization, vaccinations, or antibiotics, at least not here, I do at least contrast these practices with those of the eastern healing arts like Ayurveda and Traditional Chinese Medicine that in fact do honor and treat the inner environs of the body.

11. Farmer to pharmacist: curcumin as an anti-invasive and antimetastatic agent for the treatment of cancer. Bandyopadhyay D1.

Curcumin for the treatment of major depression: a randomised, double-blind, placebo controlled study.

Anti-hyperglycemic and insulin sensitizer effects of turmeric and its principle constituent curcumin.

Dr. Carlos Santo is a licensed Naturopathic Medical Doctor and Acupuncturist in Phoenix, AZ. He has been a patient advocate for responsible medical marijuana use since the Arizona state law was passed in 2011. In his clinical practice since 1997, Dr. Santo has always researched the best possible therapies to incite the healing power innate to all of us. In addition to his private practice, Dr. Santo is the medical director of four state-licensed marijuana dispensaries where he facilitates staff and patient communication, education, and training. He welcomes questions and feedback (as long as you are nice, because he is).