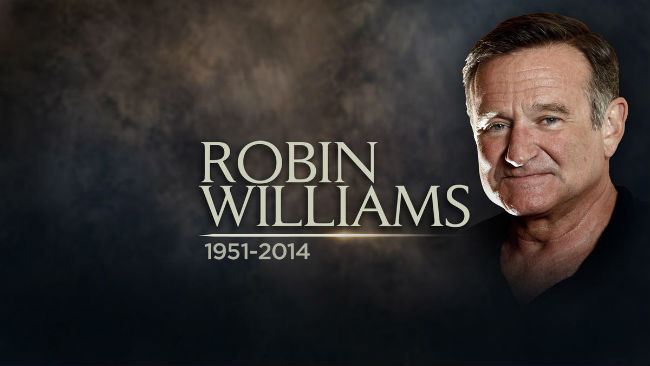 Despite my personal fears that it is somehow gauche to add my own commentary about the death of Robin Williams to the vast dialogue that has recently taken place, I have been unable to shake the following Huáng Dì Nèi Jīng (黄帝内经) passages from my mind:

Do a basic search for Robin Williams, and—amidst “beloved”—you are likely to find descriptors like “high energy,” “manic,” and “genius.” Watching any of Mr. Williams’ improvisations or comedic performances, one can literally feel the energy he was capable of generating through his art. His high energy public persona, juxtaposed with his fatal private battle with depression, underscores the wisdom in the above passages.

This passage underscores the relationship between yīn (陰) and yáng (陽)—two concepts that are foundational to both Chinese philosophy and Chinese medicine. The ancient Chinese recognized that nothing can grow indefinitely, and that life exists on a continuum between the two poles of yīn and yáng. In the Wenzi, a Daoist text that existed at the beginning of the Han dynasty, it is stated: “The way of Heaven is to revert after reaching a climax, to diminish upon reaching fullness; this is illustrated by the sun and the moon…when things reach full flourishing, then they begin to decline; when the sun reaches midsky, it starts to set; when the moon waxes full, it starts to wane; when happiness ends, one is sad” (Cleary, p. 186-187).

The inter-relationship of yīn and yáng echoes the first law of thermodynamics: matter is neither created nor destroyed, it only changes forms. As related to the Nèi Jīng passage above, a strong burst of yáng energy will ultimately transform into yīn. Elsewhere in the same chapter, we find, “yīn is tranquil, yáng is restless.” The powerful creative flourishes Mr. Williams demonstrates in his improvisations and performances are palpable examples of the explosive and restless power of yáng. These same flourishes, however, must ultimately revert to a more yīn state. I suspect this was the case for him: each brilliant creative outburst was likely followed by a period of rest and quiet (at best) or depression and suicidal thoughts (at worst).

This statement is specific to the emotion of “extreme joy.” Williams’ was beloved because he shared his own extreme joy with us. Unfortunately, such a high-energy state requires a large expenditure of yáng qì to sustain, which ultimately results in the depletion of yáng. When the yáng becomes exhausted, the yīn takes over while the yáng regenerates. As stated above, these yīn states can simply be periods of rest and repose, or they can degenerate into feelings of depression and suicide.

If joy causes harm, it damages the Heart

In Chinese medicine, a common cause of depression is Heart and Spleen deficiency (Shi, p. 159-160). According to Sù Wèn Chapter 23, the Heart houses the Spirit (神 shén), which relates to consciousness and our ability to think, feel, and respond (Wiseman, p. 550). The state of the Spirit is an important diagnostic indicator of health—it manifests in the patient’s face (particularly the eyes) and demeanor. Bright eyes, articulate speech, and vitality are positive indicators; dull eyes, incoherent speech, and blunted affect are negative indicators (Wiseman, p. 551).

The Heart is associated with the phase of Fire, the South, and the season of the Summer. Let me take a brief moment to address the Chinese medicine detractors who typically use such statements to attack our field as “mystical nonsense” or “pseudoscience”: we don’t actually think there is a literal fire in the Heart. It is a description we use to explain the nature of the heart—sort of a holographic image that describes the role of the heart in the body.

In Judeo-Christian terms, the notion of a spiritual fire in the heart is a common descriptor of mystical experience. In fact, it is one of the most common descriptions of the presence of the Holy Spirit. St. Teresa of Avila (1515-1582) described her experience in these terms: “I saw in [the angel’s] hand a long spear of gold, and at the iron’s point there seemed to be a little fire. He appeared to me to be thrusting it at times into my heart, and to pierce my very entrails; when he drew it out, he seemed to draw them out also, and to leave me all on fire with a great love of God” (Teresa of Avila).

The Heart as Emperor

When the Heart is harmed, there is likely concurrent damage to the blood and the Spirit. The state of the blood in Chinese medicine is closely linked to the peacefulness of the Spirit—to cite but one example, a potential cause of insomnia (from a Chinese medicine point of view) is blood heat and/or blood vacuity. In the case of blood heat, a person cannot sleep because the heat disturbs the Spirit, while in the case of blood vacuity, a person cannot sleep because the Spirit lacks proper nourishment from the blood.

The Role of the Spleen (脾 pí) in Depression

Going back to Sù Wèn: “The Heart generates the blood, the blood generates the Spleen.” This relates to a complex Five Phase (wǔ-xíng 五行) association that I don’t have time to explain here. What I will say is that, just as the Heart is associated with Summer, the Spleen is associated with the transitional period between the Seasons (Nèi Jīng Sù Wèn). I find this association particularly interesting with regard to the subject of depression: it is as though one gets stuck in a particular “emotional season,” and lacks the ability to assimilate and transform that emotion.

When the Spleen is deficient—from a Chinese medicine point of view—a common result is the generation of phlegm, which manifests in certain patterns of depression. Again, let me take a moment to address the TCM-haters and internet trolls out there—we do not believe that the Spleen literally produces phlegm, the “Spleen” (脾 pí) in Chinese medicine is a holographic metaphor for a particular process in the body. We also don’t believe that depression can be cured by blowing one’s nose or hacking up more phlegm! In fact, even the term phlegm is a bit of a misnomer in this context: it is more a descriptor of the kind of blunted affect or clouded thinking that typically results from depression.

The character for depression is diān (癲), which is particularly interesting when broken down into its components. On the left side of the character is the radical nì (疒), meaning “disease” or “sickness.” The other component of the character is diān (顛), meaning “summit” or “top of the head.” My reading of this character—which I preface with the caveat that I am not a Chinese linguist—is “disease of the top of the head.” My Chinese teacher and colleague, Dr. Sonya Pritzker, cautioned against extrapolating on the characters without a linguistic background, so I freely admit that I may be incorrect in my interpretation of the character, and that my reading of it is likely influenced by my own cultural perspective. I am intrigued and encouraged by the etymology, however, which suggests that the phonetic component of the character, diān (顛), is part of the same word family as tiān (天), which means “Heaven” or “sky” (Schuessler, p. 211).  With this in mind, it suggests that depression may be symbolically understood as a disease of the top of the head which results in losing our heavenly connection. In fact, the acupuncture point at the top of the head, Hundred Meetings (bǎi huì 百會), is alternatively called Mountain of Heaven (tiān shān 天山), and it is through this point that one can access the heavenly yáng energies (Deadman, p. 552-553)!

If my interpretation does have validity, it is truly humbling to recognize the depth to which the ancient Chinese understood depression, as encoded in this one character. It seems to suggest the same isolation and lack of connectedness that plague so many individuals who live with depression, including Leo Tolstoy, who said: “I say that the search for God was not reasoning, but a feeling, because that search proceeded not from the course of my thoughts – it was even directly contrary to them – but proceeded from the heart. It was a feeling of fear, orphanage, isolation in a strange land, and a hope of help from someone” (Tolstoy).

With all this in mind, I can only imagine the struggle Robin Williams faced. To the public, he was an explosion of yáng, but in private, I imagine he spent much of his time in a yīn state. One positive thing to come out of his tragic death has been a renewed dialogue and public acceptance of depression. I offer this Chinese medicine perspective to my colleagues and former students in the hope that it will inspire you to better serve depressed patients and all patients suffering from mental illness. If you or someone you know is suffering from depression, please seek help: Chinese medicine is a wonderful potential adjunct therapy to counseling and/or psychiatric treatment.

Dr. Phil Garrison earned his BA in psychology from Pomona College in Claremont, CA. His focus was neuropsychology, and he wrote his undergraduate thesis on creativity and the brain. Then, he completed a four-year master's degree program in Chinese medicine at Five Branches University in Santa Cruz, California. In August, 2012, Dr. Garrison completed his doctoral coursework at the Pacific College of Oriental Medicine. His teachers included Giovanni Macciocia, one of the most highly respected practitioners of Chinese medicine. In 2014, Dr. Phil Garrison completed his doctoral research on the Huang Di Nei Jing, the foundational classic of Chinese medicine. He was awarded the title Doctor of Acupuncture and Oriental Medicine (DAOM), the highest honor in the field.