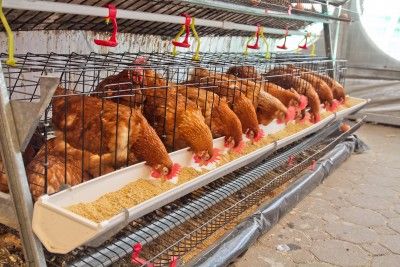 One of the techniques modern factory farms routinely use to increase weight in livestock is to give all of the animals a dose of antibiotics with every meal. When this is done, the bacteria in the animals’ guts that are susceptible to the drugs are killed. When this practice is ongoing, it creates a microbial vacuum in the animals’ intestines that gives an extraordinary competitive advantage to any bacteria that develop resistance to the antibiotics. If your goal was to breed bacteria that could not be controlled by antibiotics, you could hardly design a more effective system. It is not entirely an exaggeration to say that as a result, factory farms have become biological weapons factories.

Antibiotics have saved millions of lives, and their discovery ranks with the great medical achievements of history. But even Sir Alexander Fleming, the man who first discovered penicillin, warned that overuse of the drug would lead to bacterial resistance. And indeed, the drugs have been heavily overused, with increasingly alarming consequences. This year, between 70,000 and 100,000 Americans will die from infections that could once have been cured with common antibiotics.

When they are willing to acknowledge that this problem exists, the livestock industry pins the blame on the overuse of antibiotics in hospitals. And they have a point. The amount of antibiotics used in US. hospitals today is hundreds of times greater than it was 50 years ago. As the levels of antibiotic resistant bacteria have been rising, hospitals have tried to cope by using higher doses and employing ever more antibiotics, particularly the broad-spectrum types. But even with the greatly increased use of these drugs in hospitals, clinics, doctors’ offices and other medical settings, the use of antibiotics in factory farms still accounts for the overwhelming majority of all antibiotic use in the country.

According to the Union of Concerned Scientists, only about 30 percent of the antibiotics used in the U.S. are administered to people to treat diseases. The other 70 percent, the vast majority, are administered to U.S. livestock, primarily to compensate for the unnatural and unhealthy conditions of factory farming. “Industrial livestock systems,” the organization concludes, “are hog heaven for resistant bacteria.”

Congress is considering a bill that would attempt to save the remaining viability of our antibiotics. It is H.R. 1549, the Preservation of Antibiotics for Medical Treatment Act. Introduced by Rep. Louise Slaughter (D-N.Y.), it would prohibit several types of antibiotics from being used routinely in animal feed.

It’s not the use of these medicines to treat sick animals that would be banned, but rather the practice of routinely administering these drugs to healthy livestock as “growth promotants.” Livestock that aren’t raised in confinement rarely need antibiotics, but factory farming has grown utterly dependent on the use of the drugs.

Representatives of the modern meat industry argue that if the animals were not routinely fed antibiotics, rates of illness might increase and more antibiotics would be needed to treat the sick animals. But this would occur only if nothing was done to improve the extreme overcrowding, lack of basic sanitation, and other unhealthy conditions that typify factory farms.

The farm lobby and the drug industry are fighting H.R. 1549, because they know that it would take away a critical support for large scale intensive confinement animal agriculture. They want to retain the right to continue the widespread use of the drugs, even though this practice has repeatedly been proven to cause resistance among bacteria, jeopardizing human health and causing diseases that are difficult or impossible to cure.

Jeffrey Fisher, M.D., a pathologist and consultant to the World Health Organization, explains how severe the problem has become: “The pendulum has incredibly begun to swing back to the 1930s. Hospitals are in jeopardy of once again being overwhelmed with untreatable infectious diseases such as pneumonia, tuberculosis, meningitis, typhoid fever and dysentery.”

How, you might wonder, does the livestock industry manage to defend their current practices? It isn’t easy, but they always seem to find a way.

By then, many nations, including the Canada, the United Kingdom, the Netherlands, Sweden, Finland, Denmark, Germany and many other European countries had banned the routine feeding of antibiotics to livestock. In the United States, bills have repeatedly been introduced in Congress to follow suit, but lobbying by the meat industry has successfully prevented these bills from becoming law.

Now H.R. 1549 is raising the matter again, and many Congressional Republicans are lining up with the livestock industry against the bill. But Pennsylvania Republican Tim Murphy acknowledged that the scientific consensus is becoming incontrovertible. “The vast majority of evidence in the last three decades,” he stated this week in Congressional hearings, “points to a linkage between routine, low-level antibiotic use in food animals and the transfer of antibiotic-resistant bacteria to people.”

Seventy percent of all health-care related infections in the U.S. are resistant to at least one antibiotic, Murphy said, which already costs the nation’s health care system $50 billion a year. He added that one antibiotic resistant infection, MRSA (methicillin-resistant Staphylococcus aureus), now kills more Americans each year than HIV-AIDS.

In 2010, CBS Evening News anchor Katie Couric ran a story on the topic, reporting that: “Critics are worried that giving antibiotics to livestock, unless medically necessary, may be creating dangerous, drug-resistant bacteria that can be passed on to humans.”

The livestock industry, as you might imagine, was not pleased with Ms. Couric.

“Oh Katie, were you ever really a journalist or always just a wannabe?” huffed a spokesman for the beef industry. He called her report a “witch hunt” that was biased “against the concept of healthy farm animals.”

But when it comes to obstinate denial, you really do have to hand it to the National Cattlemen’s Beef Association. Unperturbed by something as minor as the nearly unanimous opinion of every public health expert and organization in the world, the organization tells us that, “antibiotic use in animal agriculture makes a very small contribution to the resistance issue.”

Very small? Not according to Dr. Frederick J. Angulo, an epidemiologist at the Centers for Disease Control and Prevention. “Public health is united in the conclusion,” he says. “There is no controversy about where antibiotic resistance in food-borne pathogens comes from. It is due to the heavy use of antibiotics in livestock.”

The widespread use of antibiotics in animal agriculture does slightly increase the yield and profit margin obtained by factory farms. But do the American people really think that preserving the profitability of factory farming is more important than the future viability of what may be the most significant medical tool ever developed?