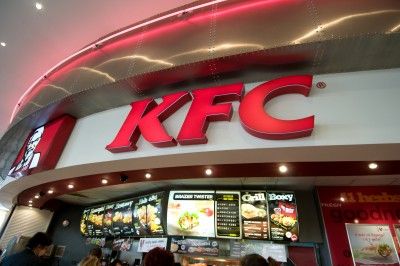 We live in a world of profound contradictions. Some things are just unbelievably strange. At times I feel like I’ve found a way to adapt to the weirdness of the world, and then along comes something that just boggles my mind.

The largest grassroots breast cancer advocacy group in the world, a group called “Susan G. Komen for the Cure,” launched a 2010 partnership with the fast food chain KFC in a national “Buckets for the Cure” campaign.

KFC took every chance it could manufacture to trumpet the fact that it donated 50 cents to Komen for every pink bucket of chicken sold.

For its part, Komen announced on its website that “KFC and Susan G. Komen for the Cure are teaming up … to … spread educational messaging via a major national campaign which will reach thousands of communities served by nearly 5,000 KFC restaurants.”

Educational messaging, indeed. How often do you think this “messaging” provided information about the critical importance a healthy diet plays in maintaining a healthy weight and preventing cancer? How often do you think it refered in any way to the many studies that, according to the National Cancer Institute’s website, “have shown that an increased risk of developing colorectal, pancreatic, and breast cancer is associated with high intakes of well-done, fried or barbecued meats?”

Meanwhile, the American Institute for Cancer Research reports that 60 to 70 percent of all cancers can be prevented with lifestyle changes. Their number one dietary recommendation is to: “Choose predominantly plant-based diets rich in a variety of vegetables and fruits, legumes and minimally processed starchy staple foods.” Does that sound like pink buckets of fried chicken?

Pardon me for being cynical, but I have to ask, if Komen is going to partner with KFC, why not take it a step further and partner with a cigarette company? They could sell pink packages of cigarettes, donating a few cents from each pack while claiming “each pack you smoke brings us closer to the day cancer is vanquished forever.”

Whose brilliant idea was it that buying fried chicken by the bucket is an effective way to fight breast cancer? One breast cancer advocacy group, Breast Cancer Action, thinks the Komen/KFC campaign is so egregious that they call it “pinkwashing,” another sad example of commercialism draped in pink ribbons. “Make no mistake,” they said, “every pink bucket purchase will do more to benefit KFC’s bottom line than it will to cure breast cancer.”

One thing is hard to dispute. In partnering with KFC, Susan B. Komen for the Cure showed itself to be numbingly oblivious to the role of diet in cancer prevention.

Of course it’s not hard to understand KFC’s motives. They want to look good. But recent publicity the company has been getting hasn’t been helping. For one thing, the company keeps taking hits for the unhealthiness of its food. When, shortly before the misguided alliance with Komen, KFC came out with its new Double Down sandwiches, the products were derided by just about every public health organization for their staggering levels of salt, calories and artery-clogging fat.

Then there’s the squeamish matter of the treatment of the birds who end up in KFC’s buckets, pink or otherwise. People for the Ethical Treatment of Animals (PETA) has an entire website devoted to what they call Kentucky Fried Cruelty, but you don’t have to be an animal activist to be horrified by how the company treats chickens, if you lift the veil of the company’s PR and see what actually takes place.

When PETA sent investigators with hidden cameras into a KFC “Supplier of the Year” slaughterhouse in Moorefield, West Virginia, what they found was enough to make KFC choke on its own pink publicity stunts. Workers were caught on video stomping on chickens, kicking them and violently slamming them against floors and walls. Workers were also filmed ripping the animals’ beaks off, twisting their heads off, spitting tobacco into their eyes and mouths, spray-painting their faces, and squeezing their bodies so hard that the birds expelled feces – all while the chickens were still alive.

Dan Rather echoed the views of many who saw the footage when he said on the CBS Evening News, “There’s no mistaking what the video depicts: cruelty to animals, chickens horribly mistreated before they’re slaughtered for a fast-food chain.”

KFC, naturally, did everything they could to keep the footage from being aired, but their efforts failed. In fact, the video from the investigation ended up being broadcast by TV stations around the world, as well as on all three national evenings news shows, Good Morning America, and every one of the major cable news networks. Plus, more than a million people subsequently watched the footage on PETA’s website.

It wasn’t just animal activists who condemned the fast food chain for the level of animal cruelty displayed at KFC’s “Supplier of the Year” slaughterhouse. Dr. Temple Grandin, perhaps the meat industry’s leading farmed-animal welfare expert, said, “The behavior of the plant employees was atrocious.” Dr. Ian Duncan, a University of Guelph professor of applied ethology and an original member of KFC’s own animal-welfare advisory council, wrote, “This tape depicts scenes of the worst cruelty I have ever witnessed against chickens … and it is extremely hard to accept that this is occurring in the United States of America.”

KFC claims, on its website, that its animal-welfare advisory council “has been a key factor in formulating our animal welfare program.” But Dr. Duncan, along with five other former members of this advisory council, say otherwise. They all resigned in disgust over the company’s refusal to take animal welfare seriously. Adele Douglass, one of those who resigned, said in an SEC filing reported on by the Chicago Tribune that KFC “never had any meetings. They never asked any advice, and then they touted to the press that they had this animal-welfare advisory committee. I felt like I was being used.”

You can see why KFC would be eager to jump on any chance to improve its public image, and why the company would want to capitalize on any opportunity to associate itself in the public mind with the fight against breast cancer. What’s far more mystifying is why an organization with as much public trust as Susan B. Komen for the Cure would jeopardize public confidence in its authenticity. As someone once said, it takes a lifetime to build a reputation, but only 15 minutes to lose it.

If you want to support an organization fighting breast cancer, you might want to know about the little known but extraordinary Pine Street Foundation. While everyone wants to detect breast cancer as early as possible, the Pine Street Foundation has been developing a remarkable alternative to mammograms. Susan B. Komen for the Cure, you may know, has been one of the foremost proponents of mammograms, suggesting their use for women as young as 25. But mammograms involve subjecting a woman’s breast to radiation, and so if repeated too often actually raise the risk of breast cancer.

In a large international collaboration, the Pine Street Foundation has been studying the ability of dogs to use their remarkable sense of smell for the early detection of lung and breast cancer. The work is based on the fact that cancer cells emit different metabolic waste products than normal cells, and the differences between these can be detected by a dog’s keen sense of smell, even in the early stages of the disease. So far, the dogs’ ability to correctly identify or rule out lung and breast cancer, at both early and late stages, has been around 90 percent – approximately the same accuracy rate as mammograms, with none of the radiation. In one study, for example, involving more than 12,000 separate scent trials, dogs were able to identify lung and breast cancer patients by smelling samples of their breath. The dogs’ performance was not affected by the disease stage of cancer patients, nor by their age, smoking or recently eaten food.

I’ve met the dogs involved in these studies (Portuguese water dogs, and yellow and black Labrador retrievers) and I know the people who have designed and undertaken these studies, and I’ve been impressed. Unfortunately, it is not yet possible to be “screened” by the dogs to see if you have cancer, but there is every hope that the concepts explored in this research will lead in the future to cancer screening methods that are more accurate than mammograms, and less harmful.

The work of the Pine Street Foundation is a good example of the many new and hopeful possibilities that are emerging. Every day there are more people and groups blazing a path to healthy food, real prevention, and less toxic approaches to treatment. The Cancer Project, for example, advocates for nutritional approaches that reduce cancer risk. Breast Cancer Action carries the voices of people affected by breast cancer to inspire and compel the changes necessary to end the breast cancer epidemic. And Beyond Pesticides works to protect public health and the environment while leading the transition to a less toxic world.