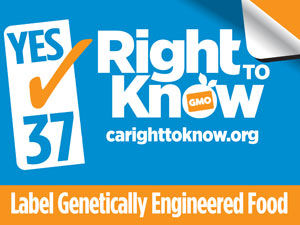 California could have been the first state in the nation to mandate the labeling of genetically engineered foods. We would have joined more than 60 countries where consumers have the right to know if their food has been genetically modified. But the prospect of Proposition 37 terrified the junk food and pesticide companies that want to keep us in the dark about what we eat.

The “No on 37” campaign spent $46 million burying the state’s voters in an avalanche of misleading ads and outright falsehoods. Their efforts defeated the proposition, 53 percent to 47 percent.

But Monsanto and their peeps didn’t just spend $46 million promoting their opinion. They also lied and got away with it. Check out these examples:

1. They illegally included the FDA logo in a “No on 37″ mailing to state residents, and made up a quote from the FDA, which the FDA refuted. The FDA did not and cannot express an opinion on ballot initiatives.

2. They used the Stanford logo in TV ads and mailers, when the University also did not take a stand on the issue. And they said that Henry I. Miller, their hired gun, is a professor at Stanford when in reality, he works for the Hoover Institution — which rents office space on the campus.

3. They paid a PR firm with expertise in fighting recycling legislation (on behalf of the soda pop industry) to generate a misleading ”study” that was designed to show the proposition raising food prices by hundreds of dollars per state resident per year. This despite independent economic analysis concluding that it would not raise prices in any meaningful way, and that in Europe, mandated labeling was not linked to an increase in food prices. (Do you really believe the pesticide and junk food companies would spend $46 million trying to save you money?)

4. They said there have never been any documented ill-effects from GMO consumption. But many allege that 37 direct human deaths and 1,500 disabilities linked to a toxic batch of the supplement Tryptophan were caused by a genetically engineered strain of bacteria used in production. And there are numerous reports of livestock that have died as a result of grazing on GMO cotton. There could be far more widespread ill-effects, but without labeling, it’s nearly impossible to find out conclusively.

5. They said Prop 37 was full of exemptions for special interests. But in reality, the exemptions were modeled after those adopted throughout the European Union and every other country that calls for labeling. For instance, livestock that are fed GMO grains don’t have to be labeled genetically engineered unless the animal, itself, is genetically engineered. That’s not a special interest exemption — it’s basic science.

What’s Next For The Food Movement?
In the last decade, the movement for healthy, sustainable food has been growing exponentially, with consumption of organic foods growing from $8 billion in 2000 to $31 billion in 2011. We’ve seen an equally dramatic rise in the number of farmer’s markets and CSAs. Still, it’s a big jump to move from 4 percent market share, to changing national food policy. Tobacco was found to be harmful to health in 1950, and it took nearly half a century to meaningfully change laws.

The food movement is growing fast, but as a political force, it’s still in its infancy. Big agribusiness still controls the purse strings in Congress, and runs the show at the FDA. At least for now.

An ABC News poll found that 93 percent of Americans want to know if their food is genetically engineered. Even after a narrow loss against a heavily financed and deeply entrenched food industry, the rapidly growing food movement may be just getting started.

“The arc of history is long,” Dr. Martin Luther King Jr. told us, ”but it bends towards justice.” As we’ve seen time and time again, when enough people demand it, eventually, change does come.

Ocean Robbins is co-founder (with his dad and colleague, bestselling author John Robbins) and CEO of the 60,000 member Food Revolution Network, which provides education, inspiration and empowerment towards healthy, sustainable, humane and delicious food. At the age of 16 Ocean founded Youth for Environmental Sanity (YES!), which he directed for 20 years. YES! directly reached more than 650,000 young leaders in 65+ nations with a call to action for health and sustainability. Ocean is author of Choices For Our Future and of The Power of Partnership. Find out more and join the movement at www.foodrevolution.org.