Look around for ‘Sacred Geometry’ on Wikipedia and you won’t find out much about its secret truth. Nope, if you want to understand the mysterious, ancient influence and ultimate importance that Sacred Geometry holds for humanity, you’re going to have to dig a lot deeper.

Watered-Down for the Masses – Sacred Geometry a la Wikipedia

Just so we’re all on the same page here to start, according to wikipedia, sacred geometry is:

“The geometry used in the planning and construction of religious structures such as churches, temples, mosques, religious monuments, altars, tabernacles; as well as for sacred spaces such as temenoi, sacred groves, village greens and holy wells, and the creation of religious art.”

Dig a little deeper though, and what you’ll uncover is far more than a glorified architectural blueprint. Sacred geometry is what our entire physical world is ‘built’ on. It’s the mathematical and numerological structure of the Universe itself.

Greater than the Mind of Man

Some call it the architecture of the Universe. Or even ‘the fingerprint of God.’ Sacred Geometry is everywhere in the natural world: from the spiraled growth of a nautilus shell to the seedbed pattern in a sunflower or a pinecone…it’s even contained within the proportions of the human body.

In fact, when you really dive deep into sacred geometry, you can’t help but see it everywhere. This is the real reason why its mathematical proportions were used for sacred architecture and spaces all over the world.

Architects, artisans and city planners in the ancient world didn’t build according to sacred geometric principles just because it looked nicer, but because building in alignment with these mathematical vibrations literally aligns structures—and the people in them—with the harmony of the Universe itself!

Did you know people have devoted entire lifetimes to study a single aspect of sacred geometry? In fact, this ‘universal architecture’ is so complex and all encompassing that it’s just not possible to cover the whole topic in an article or even a single book.

With this in mind, here’s how it all starts – consider this your ‘Intro to Sacred Geometry’!

1. It Starts with the Void

In other words, Sacred Geometry emerges from no space, no dimension and no time. From here, nature/god/prime creator (or whatever you want to call the original, source movement) begins to create.

Nature then ‘creates’ the first six dimensions in equal measure: front, back, left, right, up and down.

Within infinity, from which these six dimensions have been ‘created’, boundaries are then set in order to define space. Connecting all the ‘ends’ of the dimensions does this.

When all of the ‘ends’ of all six directions are connected, it forms the first geometric or 3-dimensional shape: an octahedron.

5. The Pyramid & Star of David

Within this octahedron are embedded two pyramidal forms and a hexagram or ‘Star of David’. This goes a long way to explaining why some of the most confounding and sacred structures on the planet are pyramids. The Star of David and other hexagonal forms such as the Sri Yantra, the Kabbalistic Tree of Life and even the Chinese I-Ching system—also based on Sacred Geometry—are held sacred the world over.

Once ‘space’ is defined, movement of consciousness (for starters) is now possible.

Once space is defined and movement is possible, you can ‘spin’ the octahedron on any of its axis. No matter which axis you choose, the result will be a perfect sphere: the second geometric shape.

Once this perfect sphere surrounding a perfect octahedron is created, nature can move to any point on the sphere, repeat the pattern and create what is called the vesica piscis—the shape that is formed by the intersection of two spheres with the same radius.

From here, the pattern continues, with each new sphere creating more complex patterns. Yet no matter how intricate and complex the patterns, they can all be found in the structure of nature.

10. The Mysterious Seed of Life

After seven spheres are created in a vortex-like motion, with each started at the center-most point of the previous circles’ intersection, the result is what is called ‘the seed of life’. And it is this pattern, which lays the foundation for physical matter to be created.

From here, if you were to spin this ‘seed of life’ pattern around its central most point, you’d get what’s called a tube torus, or toroidal field—the only shape in existence, which can fold in upon itself and never lose its structure.

12. And then Comes the Tree

The seed of life is not the complete pattern. Keep adding circles and you will get the flower of life. This pattern of the flower of life has been found throughout the world. The oldest occurrence was discovered at the Temple of Osiris in Egypt, etched into granite by some mysterious process no longer known by even the most advanced scientific minds today.

Continue on, with two more layers of circles, and the pattern morphs into what’s called the ‘Fruit of Life’ or nature’s completed pattern. It is this ‘fruit’ that becomes form itself. It’s the moment when pure consciousness can become form, or to quote an ancient text: “When the word is made flesh.”

Dive further down the Sacred Geometry rabbit hole, and you’ll uncover its connection with even more mathematical and geometric principles like the Golden Ratio, Platonic Solids, the Egg of Life and much more.

As you can see from this simple introduction, Sacred Geometry involves a whole lot more than some architect’s bright idea for a church or mosque. In fact, when you go deep enough into this complex, esoteric study, what you’ll find is that without sacred geometry, there can be no physical reality at all!

So the question now is: How far down the rabbit hole do you want to go? Let me know in the comments section below and make sure to sign up for an exclusive webinar below 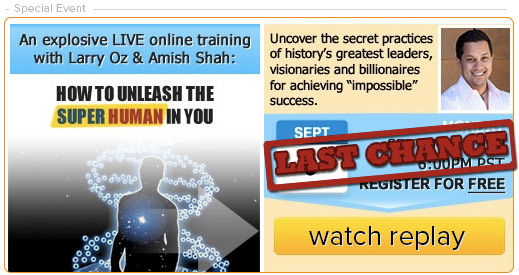 Amish Shah is an Inc. 500 entrepreneur, a spiritual explorer, a loving father and husband, and what some people would call a 'Reality Hacker'. Check out our upcoming online training with Amish: "Unleash the Superhuman in You"