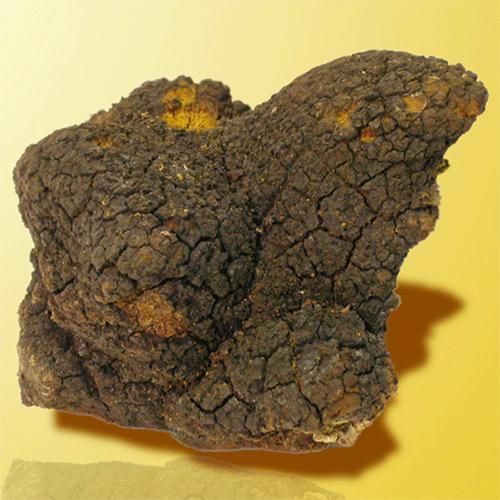 (BeWellBuzz) From the wilderness of Siberia, Finland, and cold regions of North America, China, and Japan comes a food substance that is today making quite strong ripples in the medical fraternity. That substance is none other than chaga mushroom, a potent killer of cancerous cells. Chaga is not some new substance, nor are its benefits new. Its use as a medicinal food in folk medicine is well documented and dates back to the 16th century. Not surprisingly, even then it was used for treating cancer, among other things.

Chaga mushroom (scientific name: Inonotus Obliquus) is a fungus that grows on birch and other trees. It grows mainly in cold regions and is found in Siberia, Finland, North America, China, Korea, Japan, Northern and Eastern Europe. Although chaga is a mushroom, it is quite different from regular mushrooms. Instead of being soft like other varieties of mushroom, chaga is hard and black in color. It has a quite strong, uncanny resemblance to porous wood.

Chaga is mentioned repeatedly, often in the highest regard, in folk medicine of nearly all regions where it is found. Besides cancer, it was regularly used as a remedy for ulcers, tuberculosis of the bones, and gastritis. Given its strong role in folk medicine, it is not at all surprising that natives called it with honorary names such as “Mushroom of Immorality“, “King of Plants”, “Diamond of the Forest”, and “Gift of God”.

What Makes Chaga So Special?

The answer is its ingredients. Chaga is rich in several beneficial elements that lend their special medicinal abilities. The most potent ingredient in chaga is an enzyme known as superoxide dismutase (SOD for short). SOD is not an ordinary enzyme, but belongs to a class of chemicals that prevents cells from damaging free radicals. Chaga has the highest SOD content – up to 10,000 to 20,000 units per gram – recorded in all known foods. Chaga mushroom is also extremely rich in phenolic compounds, which have a strong protective effect on the tissues and the skin. Other nutrients seen in abundance in chaga include various B vitamins, several minerals, flavonoids, and betulin acid.

Chaga is best known for its ability to fight against cancer, thanks to high concentration of betulin acid that kills cancer cells and prevent them from spreading. It is believed to be effective against several different cancers, including the following: ovarian, breast, lung, stomach, brain, spleen, prostate, cervical, blood, and thymus. Shared ahead are the details of some scientific studies done on chaga and its effect on cancer.

Study 1 In 1957, Polish experts tested chaga on 48 cancer patients. Experts recorded that 10 patients showed a measurable reduction in the size of the tumor, a reduction in pain, a reduction in both the intensity and the frequency of hemorrhaging, and a significant improvement in sleep and appetite.

Study 2 South Korean researchers evaluated the efficacy of chaga in protecting cellular DNA. They treated cells with extract of chaga mushroom and then exposed them to oxidative stress. Researchers recorded that cells treated with chaga extract had considerably less mutation, about 40% less, than untreated cells.

Study 3 Japanese researchers examined the medicinal properties of chaga mushroom and other medicinal mushrooms. Researchers noted that chaga exhibited the strongest medicinal capabilities among the studied group. Some additional research conducted recently in China and Japan has compared the anticancer capabilities of chaga to the two standard cancer treatments – chemotherapy and radiation. While chaga was found to be as effective as these treatments, it did not cause any side effects. Both chemotherapy and radiation, as you may know, cause various side effects, many of them being severe.

Since 1950, Russian scientists conducted over 3,000 experiments to study the effect of chaga and other adaptogens. An adaptogen is a substance that improves the ability of an organism to adapt to stress. Chaga, not surprisingly, was adjudged as the strongest adaptogen.

Other benefits of Chaga

Chaga, as various studies detailed above show, is a strong antioxidant, anticancer and anti-stress agent. In addition to these, this medicinal plant is believed to be a potent antiviral, immunostimulant, analgesic, and anti-inflammatory agent.

How to Consume Chaga

Chaga can be eaten raw, but almost nobody does that, thanks to its bitter taste. Traditionally, it is taken as a tea. If you wish, you can also apply it topically to the skin, inhale it as smoke, or consume it in a capsule form.

Two Facts You Must Know About Chaga

An article on chaga cannot be complete if it doesn’t include the following information: