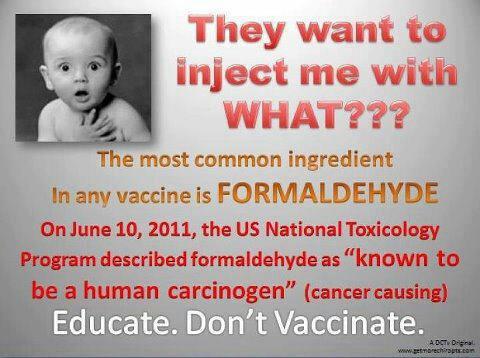 Important read no matter if you are pro or against vaccinations.

Reports have just been released of a South African infant and her parents’ painful ordeal after more than 21 vaccinations over five months left the new parents childless.

According to reports, the baby’s nearly two dozen vaccinations were considered “routine.” Her mother told reporters at Vactruth.com that “…the vaccinations were administered extremely harshly, with the nurse appearing to stab their daughter viciously with a variety of needles.”[1]

After the first round of vaccines the parents noticed baby’s legs had grown swollen and hardened for several weeks following. The doctor kept record of the reaction but reassured mama that it was nothing to be alarmed about. She was instructed to cover the infant’s legs with a warm washcloth and massage.

Despite the child’s reaction the first time doctors soon recommended another round of shots, administering 8 more vaccines all at once:

Does this cocktail of toxins seem slightly taxing for a five month old?

In the days following her baby was irritable and upset not to mention stiff and swollen. Once again she did as the nurses instructed, covering her legs with a warm washcloth and massaging.

A little more than a week later baby was looking better.

But the day following she ran a high fever. Her parents claim that they were doing their best to keep the child cool with a damp washcloth. After feeding while papa was burping her, the child let out a gasp and then slumped into his shoulder. She wasn’t dead but she was fading fast.

After a long time in the emergency room a doctor finally emerged, but his tone took them by surprise.

When they asked what happened he retorted an accusatory, “I don’t know, I wasn’t there, why don’t you tell me?”

It turned out the child had multiple fractures and blood on the brain. The doctor suspected they had shaken her nearly to death.

For the next few days baby grew increasingly ill and was put on a ventilator. The swelling and hardening persisted and before long nurses couldn’t open the child’s eyes. Her parents decided she’d suffered enough and they took her off the ventilator.

Now the parents are up for murder charges under the accusation that they had shaken the baby.

This isn’t the only known case of parents being accused of “shaken baby syndrome” in order to account for a death shortly following a vaccination. Dr. Viera Scheibner was so appalled by this trend she wrote
Shaken Babies: The Vaccination Link – “Parents and care-givers are increasingly being accused of causing shaking injuries to infants, when evidence suggests such injuries can also be the result of vaccine damage.”[3]

A quote from Scheibner’s report explains:

“Some time ago I started getting requests from lawyers or the accused parents themselves for expert reports. A close study of the history of these cases revealed something distinctly sinister: in every single case, the symptoms appeared shortly after the baby’s vaccinations.”

Voices are being raised across the globe with tragic stories resulting from vaccines. Last June parents in Belgium protested during World Immunization Week arranged by the World Health Organization (WHO). Instead of raising the kind of vaccination awareness the WHO would have liked, mothers and fathers of the deceased lined up tiny white coffins as dedications to the children they lost after fatal vaccinations.[4]

To read more eye-opening stories from around the world take a look at WavesNZ: Warnings About Vaccine Expectations, a website that gives voice to people who’ve suffered the consequences of vaccines gone wrong,[5] or Vaccine Death Articles.[6]

There are strong opposing arguments on every side of this discussion. A growing number of formidable experts speak outrightly against vaccines and don’t recommend them to anyone, ever. See “More Resources” (below) for more articles on vaccine dangers as well as alternatives.

I think, if nothing else, the cold reality of this situation calls for at least one caution: don’t assume your doctor knows best. Before having your child vaccinated pray about it, ask your friends, do your research, explore other options, let all things be considered. I’ve heard lots of stories about parents being bullied and guilted into multiple vaccines. You can opt out on the grounds of allergies, contraindications or for religious purposes. Just let it be your choice.

Finally, if your child has received a vaccination and you detect a bad reaction please take immediate action.

Healthy Child: What Are the Alternatives to Vaccination?