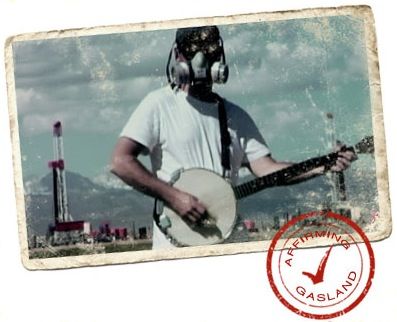 Imagine going to your tap, turning it on, striking a match and seeing it catch fire!

Now imagine your fresh water well that provided your family clean drinking water for centuries now poisoning you. As you watch Gasland, a documentary by Josh Fox,  the feeling of that scenario sinks in and you discover It’s happening all over the united states right now.

We  go through our daily routine not really thinking about what’s behind most of our amazing luxuries. Our blind consumption has created an environment where corporations get a free pass to do whatever it takes to make the most money. But what are the long term costs?

Gasland explores the practices used today to bring gas to consumers. The companies (Haliburton & others) do this with cornucopia of toxic chemicals, blended with water, which must be used in fracking.

This documentary is a brilliant, unapologetic piece that documents the blatant disregard of nature, people, and community. It was inspired by circumstances of  film marker Josh Fox.  When Josh is offered the chance to lease his family’s land to a natural gas company, he starts looking deeper into what’s going on. He discovers that that America has massive reserves of natural gas underground and in order to get to these reserves Haliburton devised an incredibly toxic way (using 596 chemicals!) to extract it. They had the right to do this because Bush-Cheney changed legislation that made Haliburton exempt from environmental protection laws. This law also allows gas drilling in public parkland!

Josh Fox and Gasland bravely takes on the ruthless corporations and shows how they are destroying America for profits.

Gasland provides an important message that should be watch by all. It’s gets our highest recommendation.

It’s time to we took a stand and demanded safer & more ecologically friendly practices for our energy consumption!

What you can do: