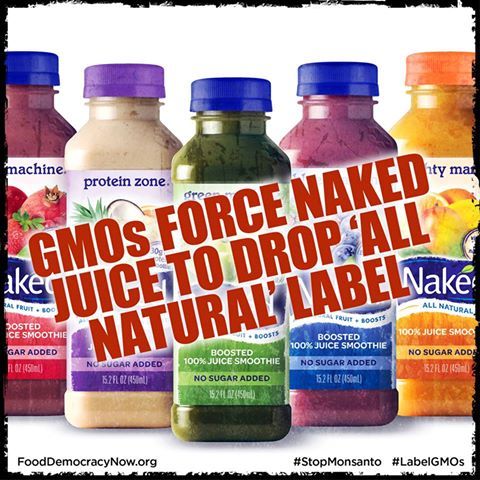 (BeWellBuzz) Stamping the claim “natural” on their Naked Juice bottles stepped PepsiCo into some murky waters, but they claim it’s the current regulation (or lack thereof) of the marketing term “natural” that is truly murky.

The FDA says attempting to define “all-natural” is troublesome because virtually any touch of the human hand transforms a food from “a product of the earth” to processed. Technically, cutting an apple is a food “process.”

As of today, “natural” and “all-natural” legally denotes no artificial colors, flavors or any synthetic (lab-made) substances. It seems that would make it clear enough but a few manufacturers have shown otherwise.

In the effort to jack the juice with nutrients Naked Juice added a mixture of both natural and synthetic vitamins. For example, the popular “Blue Machine” contains D-calcium pantothenate, a lab-made form of vitamin B5. Was it the vitamin part of synthetic that they found to be the loophole?

Naked Juice also contains a yet mostly unidentified “fiber” made by Archer Daniels Midland, a company that converts crops including corn, wheat and cocoa into products for food, animal feed and industrial use.

Other claims such as “100% Juice,” “100% Fruit,” and “All-Natural Fruit + Boosts” came under fire; and not the least on their “Non-GMO” claim.  The plaintiff alleges that Naked Juice products contain GM soy.

A Statement From Naked

Naked Juice settled at $9 million, promising to remove the “natural” labeling at least until the term is more exactly defined. However, they stand by their non-GMO standard, committing that they’ll soon be paying the fee to have a third party verify their non-GMO’ness.

I think this statement says a lot. In early August a disgruntled customer left a comment on the company’s Facebook page. Here was the Naked reply:

“Our juices and smoothies are made with all-natural fruits and vegetables—with no added sugar and no preservatives. In some products, we also include an added boost of vitamins. The ‘all natural’ claim on our label described the fruits and vegetables in the bottle—not the vitamin boosts added to some Naked beverages.”

Naked juice and smoothies will continue to be labeled “non-GMO,” and until there is more detailed regulatory guidance around the word “natural” —we’ve chosen not to use “All Natural” on our packaging…” (all emphasis mine)

File your claim at http://www.nakedjuiceclass.com right away. It took me 60 seconds, tops, and the deadline of 11/11/13 fast approaches.

For many of the same reasons, you can now also get up to $100 cash back from Barbara’s Bakery. Barbara’s Bakery products include a variety of cereals such as, ironically, “Honest O’s,” as well as fig bars, cheese puffs, shredded wheat and animal cookies called “snackimals.”

If you’ve purchased any Barbara’s Bakery products between May 23, 2008 through July 5, 2013 file your claim at https://barbarasbakerysettlement.com.