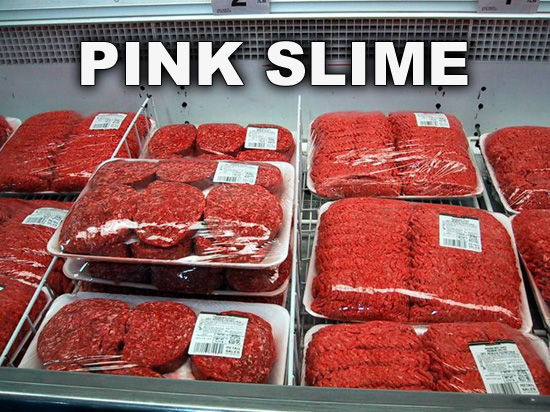 (BeWellBuzz) If you’re amongst the average American who usually spends their lunch time munching on a beef burger, you might want to stop and think again.

Do you know what’s really in that beef you’re eating with so much delight? It’s definitely not your normal red meat what I’m talking about, it’s something way more than that – it’s called ‘pink slime’!

ABC News released a shocking story on Wednesday night about a disgusting substance being incorporated in about 70% of ground beef sold in the U.S. This dangerous substance called Pink slime is known to contain ammonia and was used as an ingredient for dog food and cooking oil sometime back. Ammonia is used in it to remove its side effects and bacteria on humans.

The term ‘pink slime’ was invented by Gerald Zirnstein,  former United States Department of Agriculture scientist who shocked the world with the revelation that 70% of ground beef at all supermarkets contain ‘pink slime’. By some estimates, Pink slime makes up about 25% of each American hamburger patty!

Although a lot of food chains have stopped using ‘pink slime’ for their beef products, the US Government still buys it for school lunches. In fact, according to the newspaper, The Daily, the federal government plans to buy 7 million pounds of this meat in the coming year. Looks like no one wants children to grow healthy anymore!

Another reason for the vast use of ‘pink slime’ is its cost; it is comparatively cheaper than normal meat. Cheaper, but definitely not healthier!

What’s more alarming is that – According to a former U.S. Department of Agriculture Scientist, pink slime is made from remnants of a cow carcass once all its muscular cuts are removed. Parents all around the country have started to query the health dangers involved in giving their children beef like pink slime. They’re signing petitions against this beef to be used as a lunch item for their children at school. This entire ‘pink slime’ issue is such a pressing topic these days that many huge international fast food chains like Mc Donald’s and Taco Bell have already banned it!

Even if it is health wise sound meat, a lot of scientists agree that its nutritional value is nowhere equal to that of original meat. Not to mention the fact that how gross it would feel eating something made from leftovers of cow corpses.

Even ammonia in pink slime itself is often questioned by scientists – whether it is safe to use in food products. The least the authorities can do about this problem is to at least label the meat containing pink slime for the buyer’s convenience but that would affect a lot of sales of meat companies.

The FDA is often questioned about its judgment regarding food when corporate interests are involved. This new subject of pink slime adds more to the doubts raised by the citizens over the inspection of meat.

The Other Side of the Story

However, there is also another side that we have not touched yet. A lot of scientists also complain that this is all media propaganda of ‘pink slime’ and it’s not as disgusting as they make it out to be. If truth be told, the media does that sometimes, i.e.; changes our perception of a lot of things by presenting only side of a story.

In fact, the defenders of this beef prefer to call it ‘boneless lean beef trimming’ and debate that there’s no sound proof of it being a danger to human health. They say that, BLBT actually does well for sustaining meat products by saving lean meat that would be discarded otherwise keeping it affordable at the same time.

Pink Slime: When In Doubt, Do Not Eat!

From the ground beef you buy at the grocery store, to the hamburger you’re eating at your favorite restaurant, all of it contains at least a little bit of pink slime. And up until now, you probably didn’t even know because there is absolutely no labeling on the meat’s packaging indicating so. So, next time, before you indulge your teeth into hamburger, make sure it really is made of real meat and not some cow carcass called ‘pink slime’.