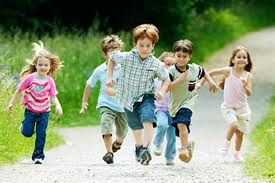 Looking good, feeling great, and aging gracefully is the desire of everyone entering middle age. When in your life have you been most carefree, happy and young at heart? Did I hear you say, “Long ago, as a child”? Then recollect from the depths of your heart the secrets of a young, worry-free life.

“I have been told that if you want something that someone else has, just study the strategies they utilize, implement them and anything can be yours.  Since I wanted to investigate youth, I decided that I would study and spend time around the youngest person I knew, my three year old daughter.  I have often heard the challenge that you should try to spend a day doing everything that your child does.  I took this challenge thinking that it would be time well spent and she would get to learn a Rooney trick or two from her “old man.” Instead, I was reminded of a number of profound secrets to staying young.  After only a half day with her, I think she may have been the most valuable “consultant” I have worked with in some time.  Too bad Ponce De Leon wasted his time seeking what was probably in front of him all along.

Secret #1  Get A Full Night Of Sleep

My daughter woke up on her own that morning and got me up.  Amazingly, she did that without an alarm clock and woke on her own terms.  The fact that she properly managed her time by going to bed early gave her a full night’s rest and had her happy, cheerful and wide awake.  I was not so lucky.  As a result of having been “too busy” the night before, I was up working on a manual much later than I should have been.  I was left tired and not as refreshed as I would like to be upon waking.

Immediately she marched me downstairs to get her something to eat.  I know my daughter is no nutritionist, but she instinctively knew to fill her body with nutrients following the night of fasting and her choice was her usual: some eggs, fresh fruit and juice.   Instead of having my usual rushed protein shake, I sat and had the same breakfast as her.  It was nice to have a few minutes to eat instead of being “too busy” and hammering down something that probably isn’t really as nutritious as it says it is just to get out the door.”

Children are amazingly resilient creatures. We would benefit from taking a moment to get acquainted with the one that still lives inside of each of us. Are you “too busy” to make way for abundant happiness, hope, and youth?