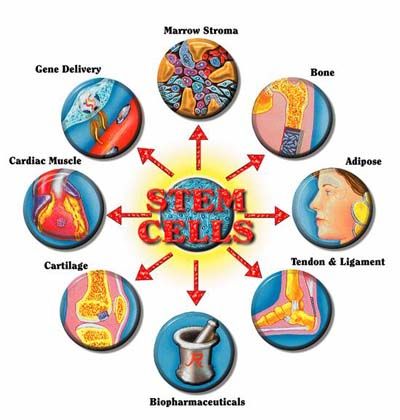 (BeWellBuzz) Before we get started on path breaking stem cell research news, let’s start with the basics. In simple terms, ‘stem cells’ is an umbrella term for cells that have the ability to divide and segregate themselves to perform specific functions before producing more stem cells of their own. This process is common in all multicellular organisms.

There are two kinds of stem cells:

Adult stem cells can be sourced from adipose or fatty tissue, bone marrow, and blood. Researchers are now banking on umbilical cord blood as a less controversial way of conducting research on embryonic stem cells and their potential to control or cure various diseases.

Stem cell research has tremendous scope for therapeutic purposes. Apart from cloning and regenerating damaged tissue which is the outcome of injury or disease, many scientists believe that stem cells can also be used to treat the following in the future:

Stem cell research in the news

In August 2010, President Barack Obama’s executive order that expanded the scope of embryonic stem cell research was quashed by Judge Lamberth, a federal district judge, on the grounds that Obama’s order violated the existing ban on federal money being used to terminate embryos. Until then, only private money could be used to fund stem cell studies.

What this meant was that bodies like the National Institutes of Health (NIH) and other federal institutions would not be permitted to fund ES cell research studies or experiments unless they were given a go ahead from the court.

The court ruling created an uproar in scientific circles, which had made a clear distinction between the termination of embryos for research purposes, and research conducted on already destroyed ES cells, such as cast-off embryos from fertility centers. This only went on to further the schism between conservative groups and the research and medical communities.

That was less than two years ago. Today, however, there have been innumerable developments pertaining to stem cell research. Some of them are listed below:

November 2011 was when the world’s oldest and most reputed stem cell firm Geron Corporation announced that it was halting its trials and research on stem cell therapeutic cures. This happened after the company failed to bring out any significant breakthroughs in its ongoing study on the effects of stem cell therapy on paralyzed and bedridden spinal injury patients.

Geron Corporation’s decision to put a stop to its stem cell research efforts came as a shock to many, because the company had been a benchmark for years as far as ES cell studies and developments were concerned.

The other symptoms and/or outcomes of MS that could potentially be reversed or halted with stem cell therapy include hampered intellectual ability and physical skills, loss of vision, and bladder control, and sensations.

Despite the recent positive news about stem cell research, there was no dearth of cautionary headlines that warned people about the probable demerits of this therapy, particularly when it came to ‘sham doctors’. For instance, CBS News is to air a segment on its popular show ’60 minutes’ about a Dr. Dan Ecklund, a Wisconsin educated practitioner who promised fake stem cell cures to numerous desperate people despite having a revoked medical license.