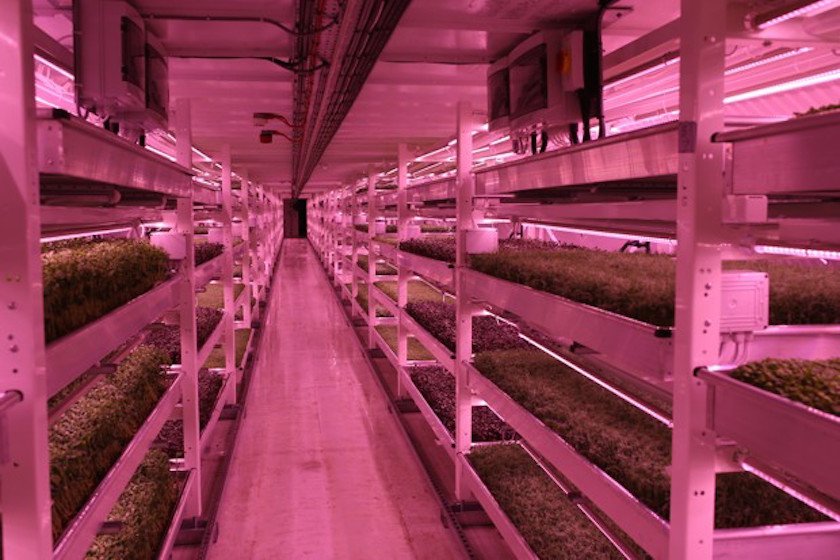 In this post from Business Insider, Feargus O’Sullivan highlights a highly unlikely subterranean site for a food farm, under London’s busy streets, showing what you can achieve just about anywhere, in any city – a fine indication for the future of food.

London’s newest urban farm proves that with the right equipment, you can grow food just about anywhere. The 1,805-square-foot carbon-neutral project has one of the strangest locations of any city horticulture project. It’s located 115 feet below a busy South London street, inside a sprawling World War Two air raid shelter. The new farm, run by the company Growing Underground, opened its doors to the press for the first time this week and will release its first crops onto the market later this month.

Just off a major road, the surface entrance of the farm is a small warehouse—the size of a corner grocery store—that gives no hint of the experiment beneath. Founding a farm here is more than just a clever use of agricultural technology. It has created a literal secret garden.

When I visited on Monday, it was a surreal experience to say the least.  After rattling down in an old elevator, I landed in what looks like a greener version of some Bond villain’s lair. The warm growing tunnels have jarringly bright, antiseptic-looking light and sweet, sticky air that hangs heavy with the faint smell of moldy cabbage.

Visitors to the site must cover their feet in plastic protectors and enter through thick plastic doors designed to keep any bacteria at bay. During my visit, an attendant was fretting about swatting a lone housefly that somehow made it down the shaft, though not as far as the crops themselves. Beyond the growing space, dingy tunnels stretch out on two levels as yet unused. It feels far from everyday London, but all the while you can hear the rattle of subway trains, hurtling past on a track just a few meters above the farm.

The methods Growing Underground uses to grow food on this unlikely site are ingenious, but already familiar. The company uses hydroponic techniques to create pesticide-free crops—typically green herbs and salad leaves such as pea shoots, coriander, and red amaranth. The plants grow on mats made from recycled carpet, watered mechanically and lit by ultraviolet light itself powered by renewable electricity sources.

This might sound expensive, but in the U.K. at least, the sort of crops Growing Underground specializes in are already mostly grown hydroponically. If anything, the farm’s subterranean location cuts overheads. Due to the relative inconvenience of access, rents here are lower than for standard surface-level warehousing.

It’s the location that makes the project so striking. Located extremely close to Central London (and barely more than a mile from London’s wholesale produce market at New Covent Garden), the farm can get its crops onto restaurant plates within four hours of being harvested, which is both a boost to freshness and a fuel saver. Restaurants are the farm’s main customers at present, with Michelin-starred chef Michel Roux on board as co-partner.

There is, however, ample space to grow into if there is demand from the general market. According to Growing Underground’s horticultural director Chris Nelson, the farm is currently using 550 square meters (1,805 square feet) to grow crops, planted in rows of trays along a single tunnel that yields between 1.5 to 3 kilos (about 3 to 7 pounds) per square meter every two weeks, depending on the crop. The farm as it stands can thus produce between 1,650 and 3,300 kilos (about 3,500 to 7,000 pounds) of greens every month.

This could be just the beginning. The subterranean site has seven other tunnels of the same dimensions to expand into, giving it a potential growing space of up to 4,000 square meters (13,123 square feet) should the demand increase.

As Chris Nelson also points out, the farm works well as a prototype showing what you can achieve just about anywhere, in any city—even ones like London with high land values:

“We’re fine-tuning some of the smaller details but basically ours is a model you could take to pretty much any brownfield site. You could put it in old disused mines, you could put in underground—anywhere in the world where you need to grow food.”

Growing Underground’s current growing plans may be the lightest of garnishes to London’s fresh food needs, but when it comes to using other improbable, unpromising sites to create stuff to eat, the concept they have created could be the beginning of something huge.

Originally found at: This farm 115 feet below London’s streets could change the future of food