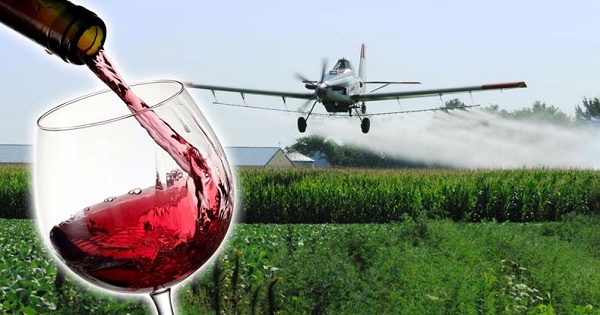 Roundup’s hormone disrupting chemical, glyphosate, has been found in 100% of the California wines tested. The toxin is even present in some labeled as organic! This post from A Sheep No More highlights the extent of pervasiveness of the hormone disrupting toxin.

Before you pop open a bottle of California Merlot, there is something you should know: trace amounts of glyphosate, the primary toxic chemical found in Monsanto’s Roundup herbicide, have been found in 100% of California wines tested by the national GMO awareness group, Moms Against Monsanto.

The news comes on the heels of a report finding 14 brands of beers tested positive for the likely carcinogen in Germany.

According to Moms Against Monsanto founder Zen Honeycutt, who recently penned an article on the findings for EcoWatch, the contamination of conventional wine was 28 times higher than organic wine, with levels ranging from 0.659 parts per billion (ppb) in organic to 18.74 ppb in conventional wine.

The group tested wines from Napa Valley, Sonoma, and Mendocino counties in California.

The brand names were not released, but 10 major California wines, all tested at a lab in St. Louis, Missouri, were found to contain glyphosate.

In addition to glyphosate being in Roundup, the poisonous substance is found in 700 other herbicides.

The highest level of glyphosate detected was found in a 2013 Cabernet Sauvignon from a conventional, chemically-farmed vineyard. The lowest was detected in a 2013 Syrah from a biodynamic and organic vineyard that had never been touched by pesticides.

“Because Roundup/glyphosate is not permitted on organic or biodynamic vineyards, the results are unexpected and can only be explained by the drift of chemical sprays from neighboring vineyards.”

In EcoWatch, Honeycutt lists some of the many reasons why Roundup/glyphosate should never be sprayed on crops, including vineyards: